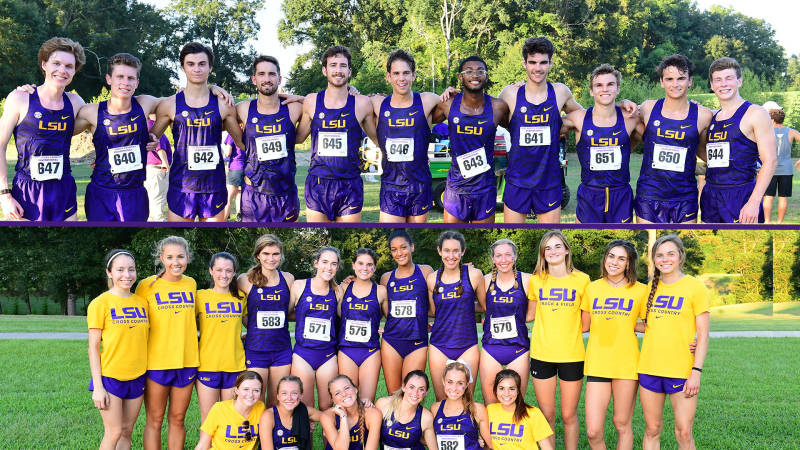 Baton Rouge, La. –  The LSU men’s and women’s cross country teams both won titles as the hosting team in the 2019 LSU Invitational at Highland Road Park on Friday night. Both the men and women ran the 5k where the men’s squad scored a total of 25 points and the women scored 26 points. The men’s and women’s Tigers have claimed titles in back to back meets.
Live Results

The women were the first group to run and were led by sophomore Katy-Ann McDonald who placed first overall with a time of 17:24.33.  McDonald made her season debut for the Tigers on Friday and looked in mid-season form already.  Sara Funderburk continued her impressive senior season with a second-place finish in the 5k with a time of 18:18.81.  Alicia Stamey was third Tiger to finish as she crossed the finish line in sixth place (18:56.15).  Stamey was followed closely by Amber Desselle who placed in seventh with a time of 19:00.49.  Rounding out the top scorers for the women’s team was Jennifer Bennett who finished in tenth place (19:21.56).

“I think I got out quite fast in the race,” said first place finisher Katy-Ann McDonald.  “I just had to hold on and stay strong throughout.  The whole team did pretty well.”

Over on the men’s side junior Eric Coston made his season debut and made an immediate impact. Coston was the top collegiate finisher overall as he came in second place with a personal best time of 14:49.43 in the 5k.  Also making his season debut was Adam Wise who was the second collegiate runner to finish; Wise finished in third place overall with a time of 14:57.37.  Freshman Davis Bove made his collegiate debut for the Tigers on Friday night and finished sixth overall with a time 15:15.26.  The 2019 U.S. Junior Elite Triathlon Champion got his college career off to a very impressive start.  The last two Tigers to score for the men’s squad were Thomas Laville Jr. (15:19.12) and George Femmer (15:38.91).  Their efforts were good enough to earn themselves ninth and tenth place respectively.

“I think it was a great day overall” said Eric Coston.  “We have been working hard week in and week out.  For the past couple weeks. I have been trying to maintain fitness and get prepared for the season ahead.  I’m proud of myself, it’s a lifetime best for me in the 5k.  Some of my teammates ran a PR as well, so I think we are going in the right direction.”

Up Next
The Tigers will be back in action next Friday at the Joe Piane invitational in South Bend, Indiana.