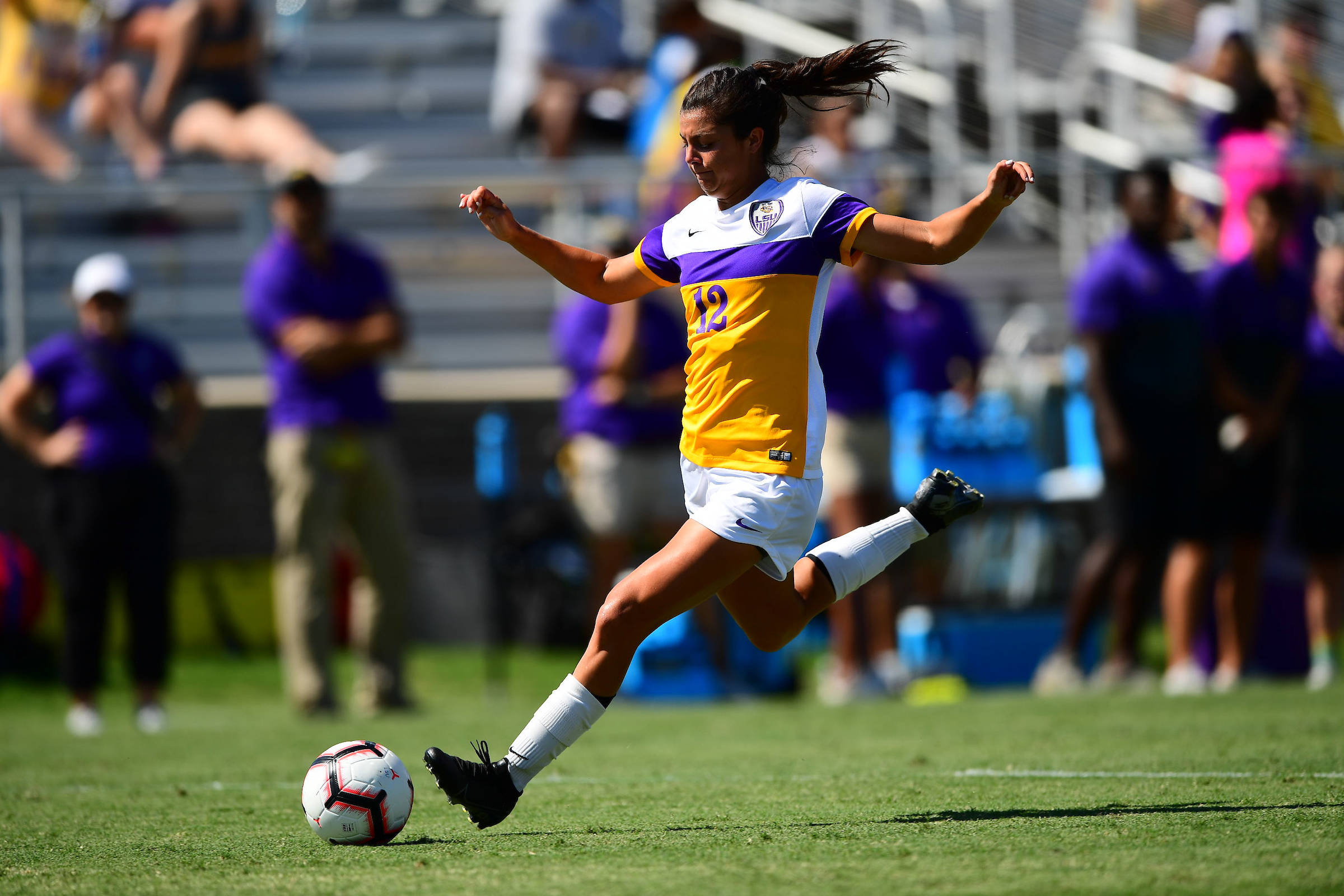 Baton Rouge, La. – The LSU soccer team (2-6-1) finished off a three game home stand at LSU Soccer Stadium on Sunday by falling to James Madison, 1-0; the Dukes improved to 3-7-0 on the season.

The Tigers outshot James Madison 18-6 on the day, but couldn’t get the ball into the net. A curling shot by Phoebe Dinga in the 74th minute proved to be the difference maker in the ballgame. LSU didn’t go quietly as they had a number of opportunities over the final 15 minutes of the match.

In the 80th minute, Molly Thompson drew a foul by a James Madison defender in the box and it resulted in a penalty kick for the Tigers. Marlena Cutura toed the spot and her attempt was denied by Hannah McShea. Jade Clarke did a stellar job of following up on the loose ball inside the six but her follow-up shot was turned away as well. A shot by Lindsey Eaton in the 81st minute shortly after the penalty attempt resulted in LSU’s fourth and final corner kick of the match. Cutura sent a service into the box and after the ball bounced around for a few, Reese Moffatt struck the ball solidly with her left foot, but it rolled just wide right. LSU’s final chance of the match came in the 83rd minute when Cutura’s shot from the top of the 18 was blocked. The blocked shot bounced over to Thompson who had another narrow miss with her shot that went wide right.

Emma Grace Goldman starred in the net for the Tigers with two saves on the day. The biggest save she made came less than three minutes into the match as JMU’s Mia Pham shot from eight yards out was gathered up by Goldman. Her lone other save of the match came in the 35th minute.

It wasn’t just the final 15 minutes of the match that the Tigers were on the attack. The Tigers constantly applied pressure throughout the full 90 minutes starting in the 14th minute. Maya Gordon had LSU’s first good look of the game with a shot from 20 yards out that went just a tad wide of the far post on the left side. Less than a minute later, Cutura played Rammie Noel into the right side of the box and Noel put a quality strike on goal. McShea, JMU’s goalkeeper, was unable to corral Noel’s initial shot but a JMU defender beat Meghan Johnson to the ball and cleared it away. Tiana Caffey played a beautiful ball down the left side of the pitch in the 33rd minute to Thompson. Thompson danced a bit with the ball and left a JMU defender in the dust and took a shot from just outside the 18 that went wide left. Cutura nearly had an upper 90 banger in the 44th minute from outside the 18, but it went just a bit high.

The start of the second half showed promising signs for the Tigers with two great opportunities in the first 10 minutes. A curling free kick from Cutura in the 52nd minute found the toe of Meghan Johnson but Johnson’s touch squeaked just wide right. The 55th minute saw Johnson send in a ball to Maddie Moreau, who had her shot from eight yards out saved. Noel had a chance for a goal in the follow up of Moreau’s saved shot, but her attempt went high.

The Tigers will play their first SEC road game of the year with a showdown against Georgia on Thursday night (6 p.m. CT) in Athens.