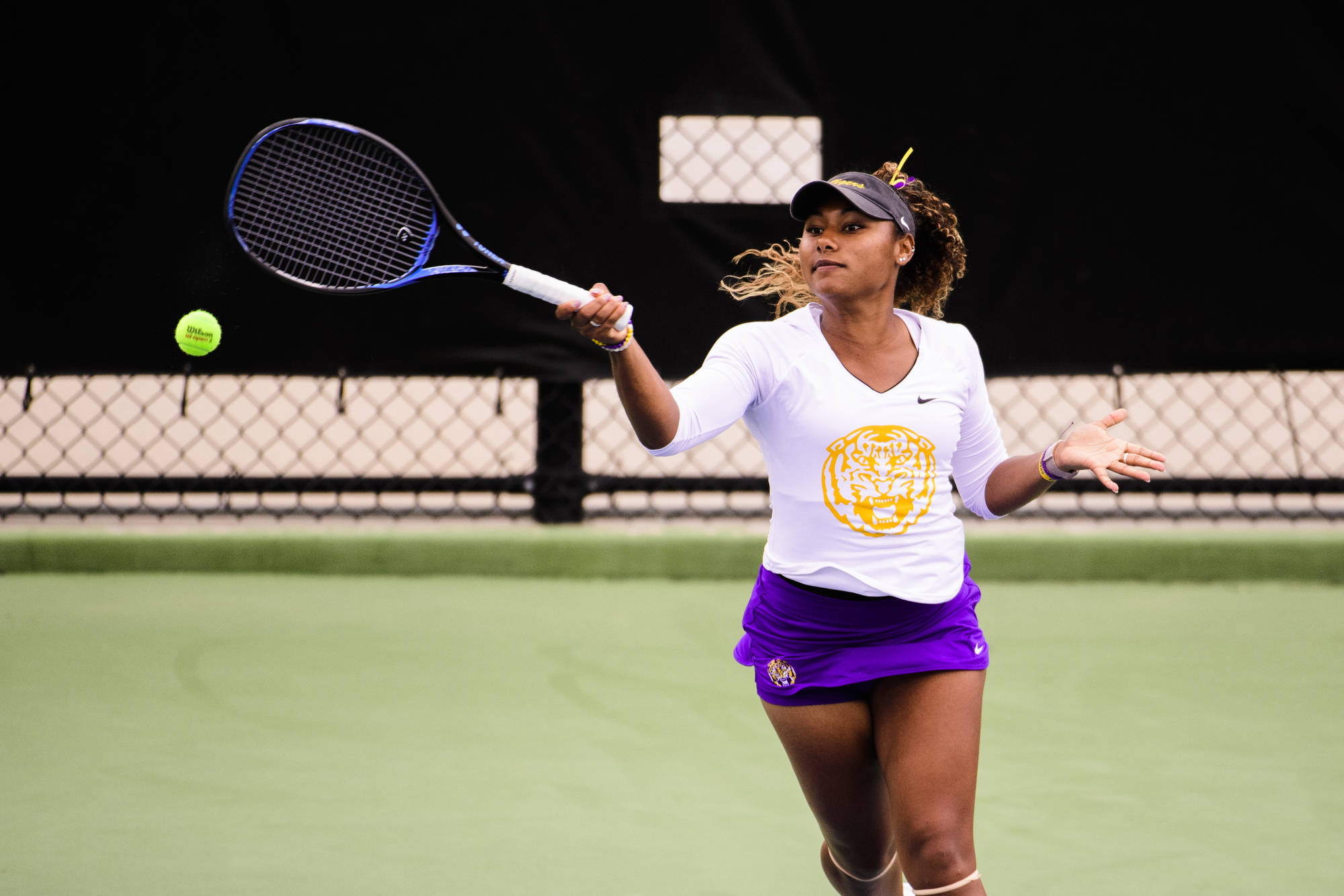 Due to torrential rain, the matches at the Miami Fall Invite in Coral Gables, Florida, were postponed to tomorrow.

The No. 37-ranked doubles duo of junior Eden Richardson and Carrington started the day by taking on Northwestern’s Julie Byrne and Hannah McColgan. The teams contested a close match, with not much room for error for either. However, the Tiger duo was able to come out on top, 8-6, and earn a spot in the quarterfinals.

Corley and freshman Nina Geissler were matched against Eastern Carolina’s Alisa Diercksen and Lisa Hofbauer. The Tigers started out strong before ECU’s tandem replied by catching up and taking the lead. The two teams traded games back and forth before Diercksen and Hofbauer downed Corley and Geissler by a score of 9-7.

Geissler’s second round matchup in singles saw her take on Oklahoma’s Camila Romero. Geissler came out the gate strong, sweeping the first set 6-0. Using momentum from her strong start, Geissler only dropped two games as she won the second set 6-2 and moved on to the next round.

Carrington faced Florida Atlantic’s Natalie Kallmunzerova in her first singles match. Carrington took an early lead in the first set and won comfortably, 6-3. The second set was more of the same, with Carrington coasting to a 6-3 win and earning a spot in the round of 16.

Corley took on Tia Mukherjee of Michigan State in the second round of singles. Corley’s strong start catapulted her to a 6-3 win in the first set. In the second set, Corley kept her form, winning by a score of 6-3 and advancing rounds.

No. 11-ranked Richardson matched against Lipscomb’s Kate Popova. Richardson started the first set slow, with Popova taking a couple of games from her. Despite this, Richardson pulled through to win the first set 6-2. The second set was similar to the first, with Richardson winning convincingly, 6-2, and advancing.

The round of 16 fixtures began with Carrington facing No. 31-ranked Paola Delgado of VCU. The freshman showed her strength by controlling the first set and winning it 6-3. An hour rain delay began as the second set was about to start. Following the delay, Carrington and Delgado had a back and forth set, trading points and games. In the twelfth game of the set, Delgado took a 40-0 lead, one point away from tying the set at 6-6 and forcing a tiebreaker. Carrington rallied from behind, taking the next four points to win game and set. The win was Carrington’s first ranked win of her collegiate career, and gave her a spot in the quarterfinals of the competition.

Geissler’s Round of 16 opponent was Memphis’ Lauren Bente. The freshmen looked in control for most of the first set, taking it by a score of 6-4. Bente started the second set well, winning three of the four games to take a 3-1 lead. Geissler flipped momentum and took the rest of the games in the set, winning 6-3 and joining fellow freshman Carrington in the quarterfinals.

Corley was matched against the No. 21-ranked Oleksandra Korashvili from Oklahoma. The first set was an even matchup that had players trading games all the way up to a tiebreaker. Korashvili took an early lead in the tiebreaker before Corley was able to pull back and marginally win 8-6 to win the first set. Riding the momentum from winning the tiebreaker, Corley dominated the second set, winning it 6-2 and securing her place in the next round. Corley’s win was her first ranked win of the year, and highest of her career.

The final match of the day was Richardson taking on No. 50 Angela Kulikov out of USC. Kulikov swept Richardson 6-0 to take the first set. The second set was closer, with Richardson’s attempt at a comeback falling short as Kulikov won 7-5 to advance.

Day three of both tournaments begin tomorrow with doubles at 8 a.m. CT.