Loughlan, Tigers Shine on Day One 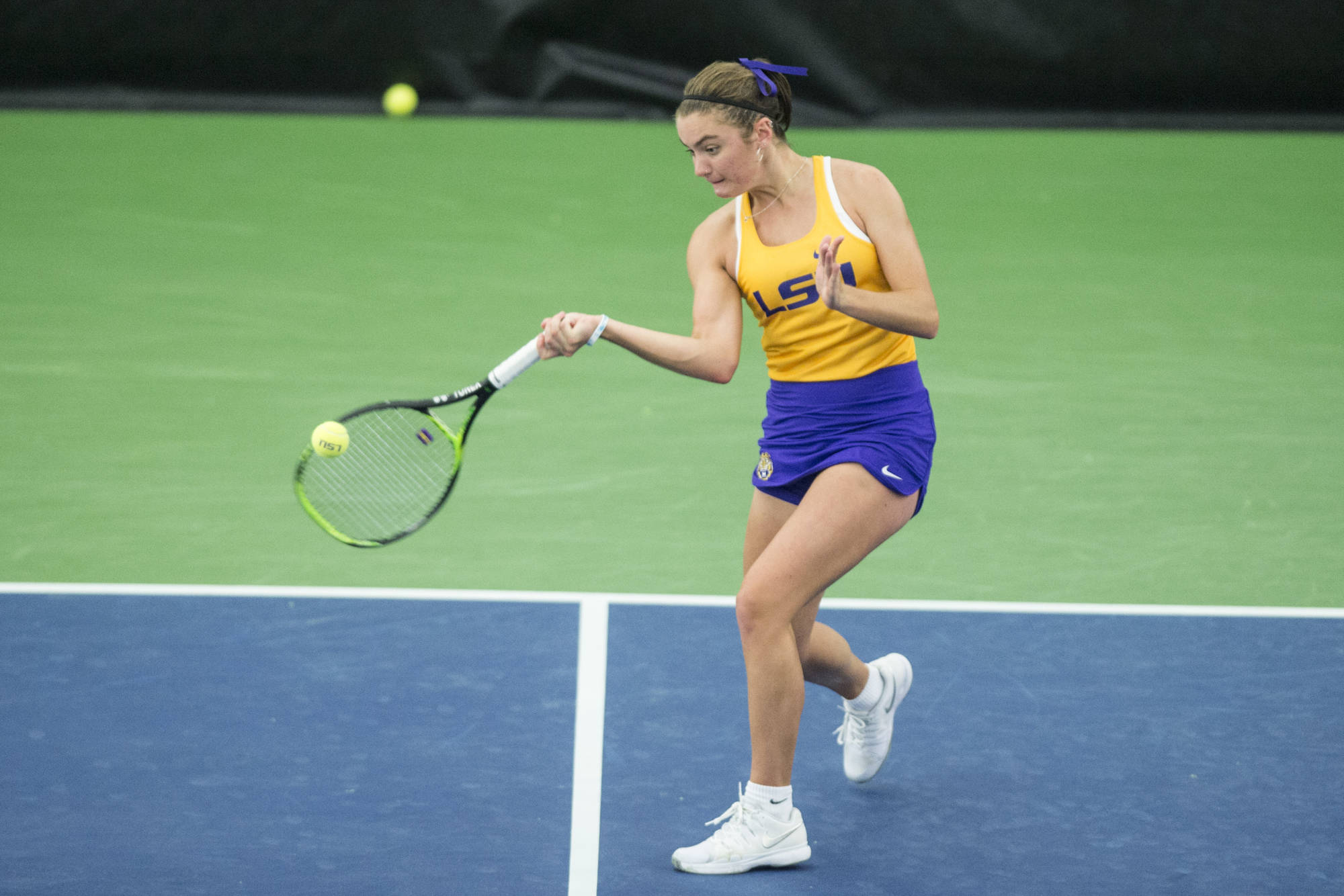 In doubles, sophomore Anna Loughlan teamed with freshman Maggie Cubitt against Florida Atlantic’s Natalia Boltinskaya and Karin Kozlejova. A slow start for the Tigers saw the duo drop four of the first five games, trailing 4-1. From there, the team won the following game and didn’t look back on their way to a 6-4 opening round win.

An odd number of participants meant that junior Luba Vasilyuk was paired with Alba Retortillo, a freshman from Florida Gulf Coast. The makeshift duo took on Utah’s Emily Dush and Madeline Lamoreaux. A closely contested match saw the teams trading games back and forth before Utah’s duo gained the advantage and won the match 7-5.

Loughlan took on FGCU’s Ida Ferding to begin the singles campaign. A quick start saw Loughlan take the early 3-1 lead before Ferding would come back and tie it. After trading a few games, the set came down to a tiebreaker, where Loughlan came out victorious and took the first game 7-6. Using this momentum, Loughlan stormed to a 4-1 lead before the weather would require a two-hour delay. When play resumed, Loughlan picked right back up on form and won 6-1, winning the match in straight sets.

Vasilyuk faced Sara Kelly from FGCU in the first round of singles. Vasilyuk had a great start and rode the momentum on her way to a 6-3 first set win. When play resumed after the two-hour weather delay, Kelly jumped into the lead and eventually took the second set by a score of 7-5 to force a 10-point tiebreaker. A very even contest saw Kelly emerge victorious by a score of 10-8 to win the match.

In the quarter-finals, Loughlan was matched against Utah’s Whitney Hekking. Hekking jumped out to an early lead and dominated the first set, winning 6-2. In the second set, Loughlan flipped the script and won convincingly, 6-1, leading to a ten-point tiebreaker. Hekking came out strong, eventually taking a 9-4 lead. With her back against the wall, Loughlan charged back to extend the tiebreaker and eventually win by a score of 13-11, earning a spot in the semi-finals.

The No. 37-ranked doubles duo of junior Eden Richardson and freshman Safiya Carrington took the court together for the first time to take on Navy’s Kaylah Hodge and Annalise Klopfer. Navy’s tandem started out well, jumping to a 4-2 lead over the Tigers. The Tiger duo would come back and tie it up before eventually taking a 6-5 lead and winning their last two games to win the opening round match 8-5.

Senior Paris Corley and freshman Nina Geissler opened their doubles campaign against Marquette’s Fleur Eggink and Natalija Popovic. The Tiger pair got off to a slow start and found themselves trailing for much of the match. Despite this, Corley and Geissler were able to stay in contention, narrowly taking a one game lead at 8-7 before the match moved to a tiebreaker. Similar to the full match, the Tigers started behind before rallying and winning the tiebreaker and taking the first round matchup by a score of 9-8.

Popovic faced Purple and Gold again only moments later when she took on Carrington in the first round of singles. Carrington began the match strongly when she took the lead and didn’t look back on her way to winning the first set 6-3. The second set was almost identical, with Carrington not losing her edge and winning the set by the same score line, 6-3, giving her the first singles win of her collegiate career.

No. 11-ranked Richardson opened her 2019-20 singles campaign against Michigan State’s Lauren Lemonds. The first set was a back and forth contest, leading to a tiebreaker that Lemonds comfortably won by a score of 7-0 and took a one set lead. Richardson replied with a strong second set, winning 6-3 and forcing the match to a third set. In the third set, Richardson took the lead and never lost it on her way to a 6-2 set win and advances to the next round.

Corley would face Eastern Illinois University’s Rachel Papavasilopoulos to start her singles season. Corley was ruthless in the first set, blanking Papavasilopoulos by a score of 6-0. In the second set, Corley carried her momentum and was able to win the set 6-4 to advance to the second round of the tournament.

Play will resume tomorrow beginning with doubles for both tournaments, with the Miami Invitational starting at 7 a.m. CT and the Milwaukee Tennis Classic at 8 a.m. CT.