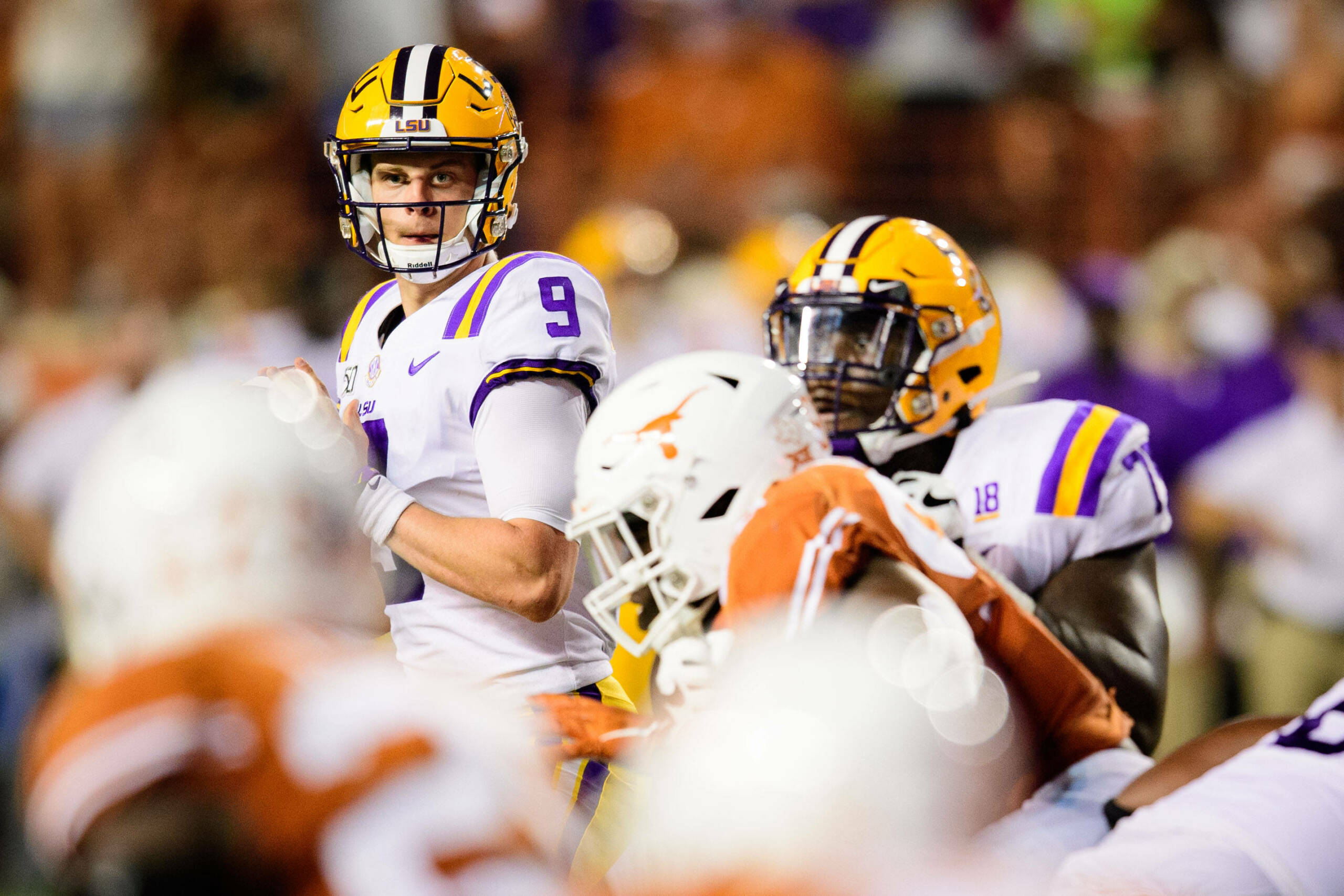 Gino Toretta won the award at Miami in 1992, while Carson Palmer (2002) and Matt Leinart (2004) earned the trophy while Orgeron was an assistant coach at USC.

As he’s watched Joe Burrow tear up opposing defenses for the first quarter of the 2019 season, he can’t help but remember that decorated trio.

“I’ve seen a lot of similarities,” Orgeron says, “or maybe (Burrow doing) some things even better than I remember those guys doing. He could become that quarterback.”

It’s a transformation unparalleled across college football, and while Burrow is among the early-season frontrunners for college football’s highest award, he’s the runaway favorite as the sport’s most improved player.

In 2018, Burrow was good, particularly late in the season. He impressed with his toughness and intelligence, and as he grew comfortable with an offense he only had six weeks to learn before the start of fall camp, his performances improved: 2019 Fiesta Bowl Offensive MVP, first player in LSU history to throw for 2,500 yards and rush for at least 350 yards in a season, and the third-highest rated quarterback in college football over the final four weeks of the regular season.

“I think Joe has made the most progress from one year to the next than I’ve seen in a quarterback,” Orgeron says, “and I think he’s going to continue to get better.”

Specifically, it’s Burrow’s performance in non-ideal circumstances – his elevation in the least optimal environments for a quarterback – which have skyrocketed his statistical output and his national perception.

For a story to be posted shortly: here’s how Joe Burrow has improved from 2018 to 2019 in five specific areas: under pressure, on the move, down field, in the red zone, and on third down.

(158.3 is a perfect NFL rating) pic.twitter.com/wynX1spoSM

In 2018, Burrow was at his best in the pocket and in rhythm. When he had time to set his feet and throw, he was dynamic, completing 64.3 percent of his passes and posting a 103.3 NFL passer rating when not under pressure a year ago.

When the pressure came, however, it got to Burrow, sack or not. His pressured splits from last season weren’t pretty: 34-of-101 (33.7 percent) for 424 yards with one touchdown, two interceptions, and a 42.7 NFL Rating.

Ask Burrow where he’s improved this season, and the first place he starts – besides “everywhere” – is right there, in the pocket.

“Last year I was very accurate when I just took like three (steps) and a hitch, throw, ball was right where I wanted it to be,” Burrow says. “But that’s not the reality of playing quarterback at this level. You have to move in the pocket and slide and get up and throw off balance and off platform.”

He spent time this summer watching film of two quarterbacks: Aaron Rodgers and himself. Rodgers is a master of manipulating the pocket, shuffling his feet one way or the other to reset and throw. Burrow, he claims, was pretty good at it himself before last season, so he compared footage of his good pocket work in the past – as far back as high school – versus his struggles last season.

He points to the 3rd and 17 touchdown pass from the fourth quarter against Texas as the culmination of that work. As the Longhorns brought the pressure, Burrow resisted the urge to bail out of the pocket. Instead, he found space, bought time, and threw off his right foot to fire accurately to Justin Jefferson, who took the pass 61 yards to the house.

“It’s a throw that I’ll remember for the rest of my life.”

An oral history of 3rd and 17, a play that won @LSUfootball a big game, a play that signified the culmination of an offensive revolution, and a play no one involved with will ever forget.https://t.co/QwK8607sco pic.twitter.com/jltBktffv7

“I worked really hard this offseason and it’s starting to show up,” he says. “I think you really saw it on the 3rd and 17 at Texas. I was in the air, hips this way, and threw it 20 yards on a dime. It was just kind of a culmination of all my hard work this offseason.”

We’ve got that in Joe Burrow. pic.twitter.com/rjXWt5gqaA

As much as Burrow’s improved in the pocket, he’s made even larger strides outside of it.

Much of his work this summer, then, focused on his on-the-run throwing. Using throwing nets, Burrow would sprint right and left, working to improve his accuracy on those occasions when staying in the pocket simply wasn’t an option

“I was also working on the on the run throws, which I was very, very bad at last year,” he says. “And I was disappointed in myself for that. But that was something that I worked really hard at. I did a ton of off platform work.”

It’s paid off. His on the move numbers through three games in 2019: 10-of-12 (83.3 percent) for 142 yards, two touchdowns, and a 155.6 NFL passer rating. Burrow was particularly deadly outside of the pocket against Northwestern State, connecting on all five in-motion attempts for 57 yards and a touchdown.

(Also, watch how in sync Dillon and Jefferson are on the first route. Kinda cool.) pic.twitter.com/CH9gWDfkDh

“Joe made a couple of throws out there that you just go, ‘Wow.’ You turn back the film time and time again and say, ‘How did he do that?’” Orgeron says. “Tremendous athlete. Tremendous touch.Tremendous will to win.”

Burrow swears his arm strength hasn’t improved all that much in the past year, but he’s never been more effective throwing down field.

Orgeron emphasizes taking shots in LSU’s offense – eight per game was his stated goal last season. And while Burrow had success going long as a junior – he picked up 856 yards and 10 touchdowns on 76 attempts of 20+ yards in 2018 – his accuracy came and went, as he completed just 25-of-76 (32.9 percent) of his deep throws a season ago.

In 2019, those numbers – you guessed it – have only gotten better. Burrow is 7-of-10 for 261 yards and two scores on throws of 20+ yards through three games, good for a 152.1 deep passer rating that ranks first among Power 5 quarterbacks.

1. Thad Moss can do it all. Perfect pass pro on the edge. Been quietly excellent in two games this year.

It’s a stat Burrow says is a product of the entire offense’s improvements. He’s got more time in the pocket to let deep balls develop – his 44 completions of 2.5+ seconds to attempt rank second nationally, and his time in the pocket is up from 2.81 seconds per throw last year to 2.91 this year – thanks to an improved offensive line. And his receivers, well, they’re catching everything he can throw their way.

“One, the receivers are catching every ball I throw to them, whether they’re covered or not,” he says. “Two, the o-line is giving me a lot of time to protect. And three, I worked really hard on this offseason on my footwork and being more accurate. The combination of those three things, our completion percentage is pretty high.

Third Down and Red Zone

It’s a cliche among quarterbacks that goes back to the invention of the forward pass: “Third down is money down.”

A year after struggling to move the chains consistently, Burrow’s been straight cash on money down in 2019.

In 2019, Burrow’s up to a 108.0 NFL rating (9-of-14, 146 yards, five touchdowns, one interception) and has almost doubled his third down scores from three to five. As a team, the Tigers rank eighth nationally in third down offense, moving the sticks 57.6 percent of the time.

Those drastic advances get even more drastic in the red zone, where Burrow has become among the nation’s best at finding the end zone. He’s completed 12-of-15 passes for 97 yards and eight touchdowns inside the opponents’ 20 yard line this season, good for a 133.2 NFL rating. Compare that to last year’s 47.3 red zone NFL rating (16-of-54, 99 yards, five touchdowns, three interceptions). In just three games, Burrow has nearly doubled his red zone touchdown figures from last year’s five to this year’s eight.

Both red zone and third down throws require anticipation. The windows get smaller, the pressure dials up, and quarterbacks must be at their sharpest.

“I’m throwing with a lot more anticipation this year, which just has a lot to do with concepts that we’re running,” he says. “I really understand where I need to throw it, when it needs to be there. I’m seeing defenses a lot better this year, just because we’re spreading it out more which makes it easier for me to see. So that makes me hit the window a lot faster.”

He’s also developed a better chemistry with his receivers. In 2018, he arrived in June and had little time to learn tendencies and timing before the season started. Now, he’s had an entire year to grow familiar with his targets, and the product is evident on the field.

“I’m throwing the ball before they’re coming out of their break,” Burrow says. “and they’re exactly where I expect them to be when I expect them to be there. Last year it wasn’t that way. I had only been here for a month and a half before the season and we couldn’t really get that timing we really needed and then me being here year all those guys come back it’s really benefited us.”

1. Joe Burrow‘s eyes are key here. Looks right, the linebackers follow, and he’s got a window to throw through.

Put it all together – improvements under pressure, on the move, down the field, and in third down and red zone situations – and Burrow’s body of work is among, if not the best in college football.

To those on the outside, he looks like a Heisman contender. Those on the inside see the makings of a championship contender.

Burrow sees something else: the need to improve even more. He’s proud of the progress he’s made, but he’s not satisfied. It’s why coaches had to calm him down after he left the Northwestern State game with a 21-of-24, 373 yard, three touchdown (two passing) performance.

There was one person upset with Joe Burrow‘s performance on Saturday, when he completed 21-of-24 passes for 373 yards and 2 TDs: Joe Burrow.

“My goal for the game was completing every ball. I was kind of upset with myself.” pic.twitter.com/fwSBnskC0l

“They had to kind of calm me down because I was upset,” Burrow says. “My goal of the game going into Saturday was completing every ball, and I was kind of upset at myself for, one, the interception, and, two, the two other incompletions. So they had to make me realize that we still completed 88% and threw for over 400 yards as a team. We were really good on offense on Saturday. And, I still feel like we can get a lot better.”

How did Joe Burrow get better this summer? The same way he plans to keep getting better this fall.

“We still feel like we can get better,” Burrow says. “There’s always room to improve.”