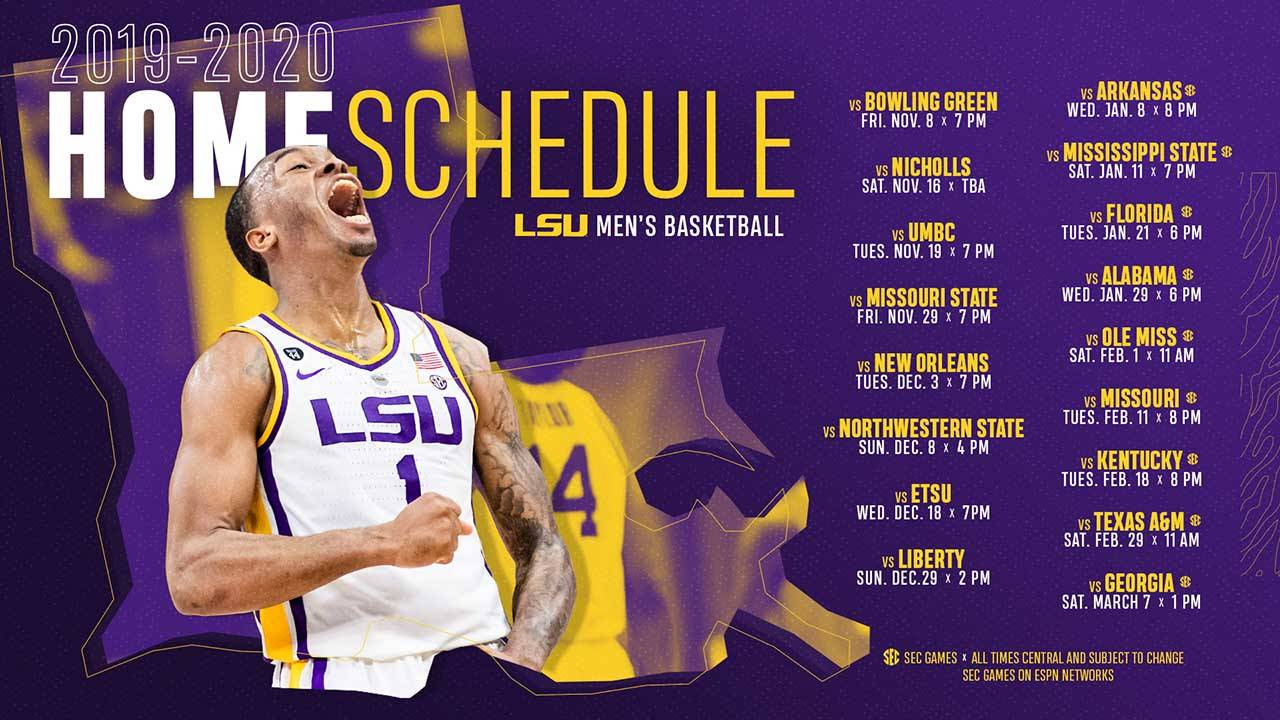 BATON ROUGE – The Southeastern Conference and its television partners announced the 18-game league schedule for the 2019-20 season on Tuesday.

In total, with nine home conference games, the LSU Tigers will play 17 times at the Pete Maravich Assembly Center.

Season ticket information for the defending Southeastern Conference champions can be found online at www.LSUtix.net.

LSU will face 14 teams in the regular season that advanced to post-season play a year ago.

The Tigers will open conference play on the road in their only regular-season meeting with Tennessee in Knoxville in a game televised on ESPN2 or ESPNU at 11 a.m. CT on Saturday, Jan. 4.

There will be two special events at the Maravich Center in February. LSU will celebrate the 50th anniversary of Pete Maravich breaking the NCAA career scoring record on Saturday, Feb. 1, against the team Maravich broke the record against, Ole Miss. The game will be at 11 a.m. on ESPN/2/U.

Then in LSU’s next-to-last home game on Feb. 29, at 11 a.m. against Texas A&M, LSU will retire the jersey of Mahmoud Abdul-Rauf in halftime ceremonies. Abdul-Rauf under the name Chris Jackson had a spectacular two-year career at LSU (1988-90), setting an NCAA freshman scoring record of 30.2 points a game during the 1988-89 season. The 50-year-old, who was named SEC Player of the Year in both LSU seasons, is continuing to play basketball successfully professionally in the BIG 3 league.

LSU will play Alabama, Arkansas and Texas A&M as usual both home and away, in addition to Ole Miss and Florida.

In addition to these five opponents and LSU’s league opener at Tennessee, the Tigers are scheduled to travel to Vanderbilt (Feb. 5), Auburn (Feb. 8) and South Carolina (Feb. 22). LSU was a perfect 9-0 on the road in league play last year.

The Tigers, winners of 28 games a season ago and advancing to the NCAA Sweet 16, will open the third season of Coach Will Wade‘s tenure at LSU on Friday, Nov. 8, at 7 p.m. against Bowling Green in the Maravich Center. LSU will have eight home games in the month of November and December prior to conference play.

The Tigers will also have important road non-conference games at VCU (Nov. 13, 5 p.m., ESPN2) and in Los Angeles at the Staples Center (against USC) on Dec. 21. LSU will also be back in the SEC/Big 12 Challenge and will travel to Austin on Jan. 25 to take on Texas. The game time and broadcast network has not been set by ESPN, which has the television rights to the Challenge.

The Tigers will also travel to Jamaica for the Jersey Mike’s Jamaica Classic in Montego Bay with LSU facing Utah State on Nov. 22 and Rhode Island on Nov. 24. Those games will be televised on CBS Sports Network.