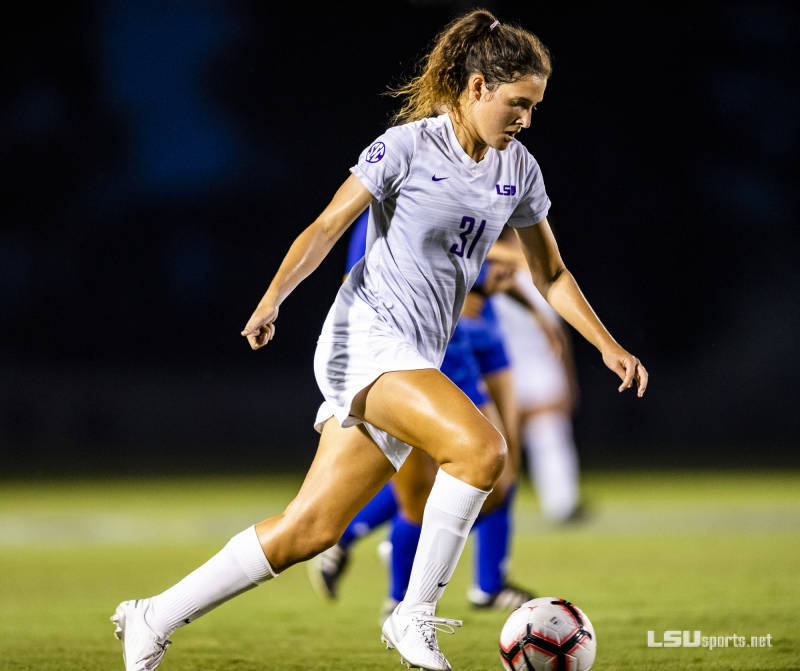 Durham, N.C. – The LSU soccer team did battle with the No. 1 North Carolina Tar Heels on Thursday afternoon at a rainy Koskinen Stadium as part of the Duke Nike Classic. The Tar Heels prevailed by a score of 1-0. The loss drops LSU’s record to 2-2-1 on the season, while UNC improved to 5-0-0.

The gamewinner was scored by Brianna Pinto in the 71st minute of play. It was the Tar Heels’ 11th corner kick of the match that ended up netting them the advantage. The initial service into the six was fisted away by Emma Grace Goldman and that ball ended up on the foot of Rachel Jones about 25 yards from the net. She played the ball over to Pinto who buried the ball in the top left portion of the goal  from 20 yards out to give UNC the lead that it wouldn’t relinquish.

LSU became the first team in 2019 to hold UNC to one goal as the Tar Heels had scored two-plus goals in each of their previous four matches this season. Meghan Johnson (18th minute) and Molly Thompson (89th minute) had LSU’s only two shots on goal of the match. The Tar Heels held the advantage in shots on goal (8 to 2) and corners (12 to 0).

Emma Grace Goldman made seven saves in the match and only allowed one goal to UNC’s potent offense. She made four saves in the first half and closed the match out with three more in the the second half.

LSU’s backline of Reese Moffatt, Shannon Cooke, Chiara Ritchie-Williams, Maddie Moreau and Rammie Noel played absolutely out of their minds to keep UNC’s attack at bay for most of the match. Good challenges, solid tackles, great communication, and tons of headed balls out of the box kept the Tigers in the match for as long as they were in it.

The Tigers will turn around and play No. 12 Duke on Sunday afternoon at 12:30 p.m. CT to conclude play at the Duke Nike Classic.