Tigers Fight Back to Earn 2-2 Draw at Samford 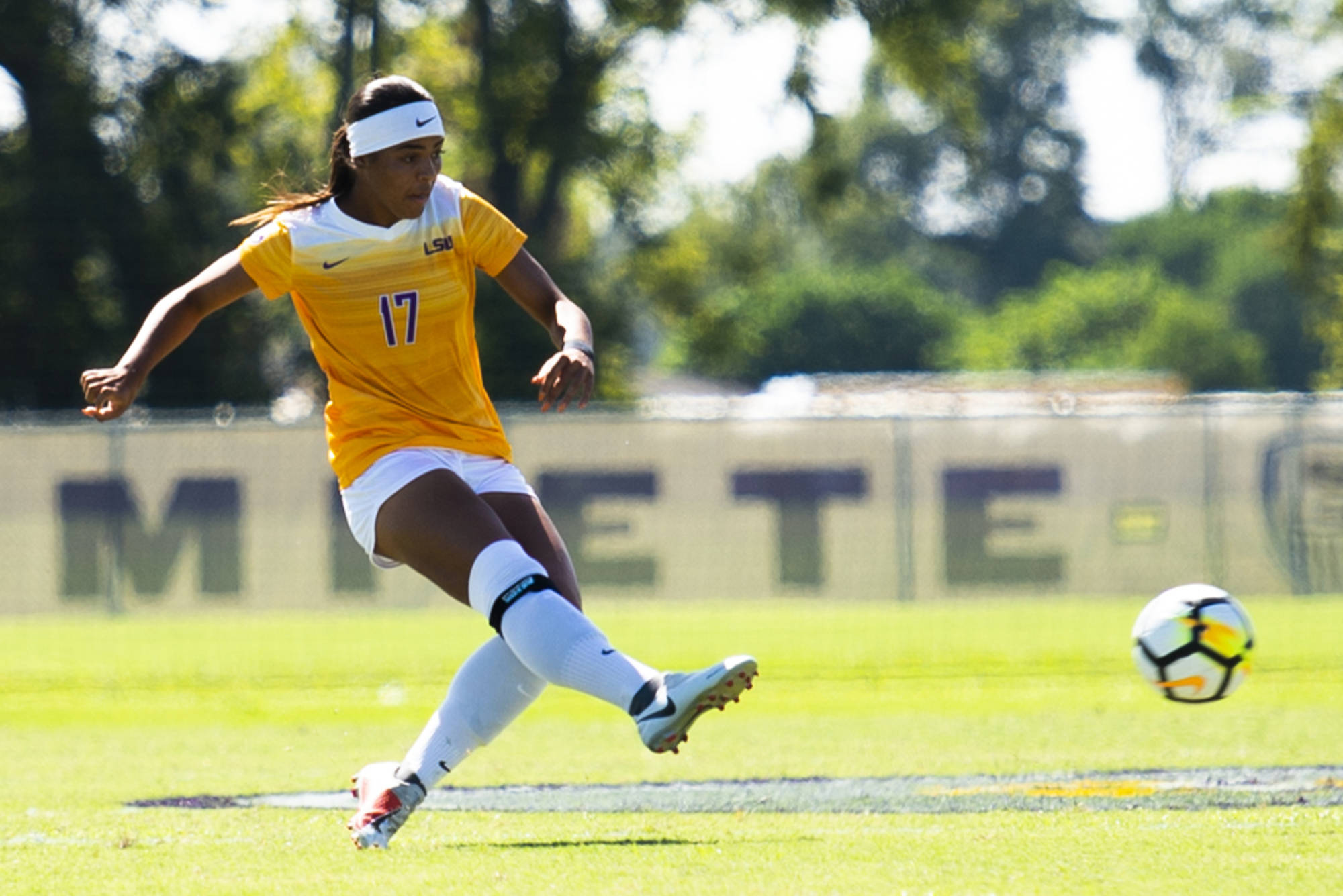 Birmingham, Ala. – Goals by Tiana Caffey and Lindsey Eaton earned the LSU soccer team a 2-2 draw on Sunday against Samford at Samford Soccer Stadium. The draw moves LSU’s record to 2-1-1, while Samford now owns a record of 1-1-2.

LSU got off to a quick start again on Sunday by scoring a goal in the first 10 minutes of play for the second-straight match. The Tigers earned their first corner of the match after a Anna Rockett throw in bounced off Meghan Johnson‘s shin before hitting a Samford defender and caroming out of bounds. Johnson would take the corner for LSU. Her play found the foot of Marlena Cutura who put a shot in the direction of the goal. A Samford defender, or two, blocked the shot, and then the loose ball landed on the foot of Tiana Caffey who took a nice first touch and played a low shot off a bounce towards the bottom left part of the goal. Samford’s keeper nor any defenders could stop the shot and hit the back of the net in the 10th minute of play to give LSU the 1-0 lead. It was Caffey’s second-career goal and first of 2019.

LSU had two other brilliant chances to extend their lead later on in the first half. In the 19th minute of play, Shannon Cooke hit a curling shot from 22 yards out that almost gave LSU a 2-0 lead, but instead it ricocheted off the crossbar. In the 35th minute of play, an Emma Grace Goldman goal kick carried past midfield and Lindsey Eaton battled to gain possession in Samford’s territory. She had two defenders on her and she played a ball to her left near the top of 18. Alexander played it right away towards the net and her curling, right-footed attempt sailed just wide of the far post.

Right before half, Goldman was called on to make a save to preserve LSU’s 1-0 lead as the clock ran down. A corner kick was awarded to Samford with five seconds left on the clock and Samford’s Taylore Miller had a point blank look from inside the 6 that Goldman squared up with her two feet.

Video evidence of the save by @emmag_goldman ⤵️

Samford came out on the attack to start the second half with goals in the 49th minute by Taylor Yount and an own goal charged against LSU in the 54th minute to take a 2-1 lead.

Twelve minutes later the Tigers pulled one back to even the match. The second of two consecutive corner kicks resulted in the equalizer for Eaton in the 66th minute. Cutura started the play with the service into the box and Courtney Henderson headed the ball way up in the air towards the Samford net. A loose ball scrum inside the six saw Eaton get her toe on the ball to get the equalizer for LSU. It was the first goal of the season for Eaton, and the third of her LSU career. Henderson picked up her first-career assist on the play as well, and for Cutura it was her second-ever multi-assist game; the other one came in 2018 against Stetson.

Alexander took LSU’s only other shot on goal in the second half in the 71st minute that was secured by Samford’s Morgan McAslan. The Tigers best chance of a win after regulation came in the first overtime as Caffey almost pulled a brace. Cutura sent a corner to the far post and Caffey headed back towards the far post and the ball slid just right of the net.

Goldman was called on to make a total of nine saves on Sunday. Reese Moffatt played the full 110 along with Chiara Ritchie-Williams and Rammie Noel. Moffatt was all over the place on Sunday playing a solid centerback alongside Ritchie-Williams and blocking a number of shots. Maddie Moreau grinded out 108 of the 110 minutes taking only a short break at the end of the first half.

LSU will travel to the Duke Classic in Durham, N.C., to take on a pair of nationally ranked foes in No. 2 North Carolina and No. 10 Duke.