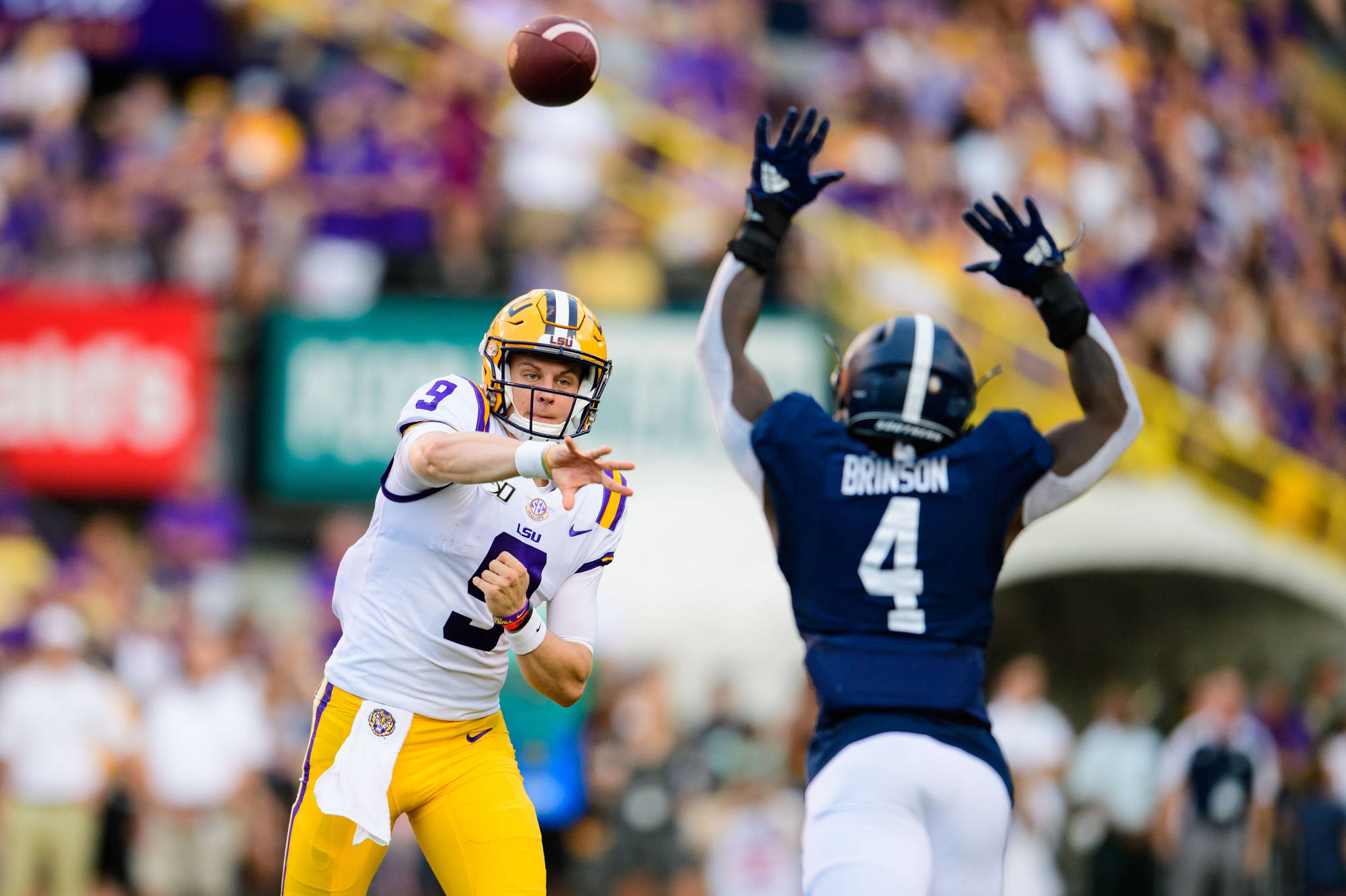 LSU (1-0) tied its second-most points in a season opener in the SEC era (since 1933), amassing 473 yards of total offense while holding the Georgia Southern (0-1) to only 98 in its first trip to Baton Rouge.

The Tigers travel to Austin to face now 10th-ranked Texas in a 6:30 p.m. CT matchup that will be televised by ABC and broadcast on the LSU Sports Radio Network. It will mark LSU’s first trip to Austin since 1954, and ESPN College GameDay will feature the game.

Burrow, LSU’s senior quarterback, was 23-of-27 for 278 yards and five touchdowns, tying Zach Mettenberger’s school record set in 2013. All five of Burrow’s scoring passes came in the first half. Myles Brennan entered in the third quarter and finished 7-of-12 passing for 72 yards.

Fourteen different Tigers caught passes in the contest, as Justin Jefferson led the way with 78 yards on five catches. Sophomore Terrace Marshall Jr. scored on three of his four receptions, TD’s of 8, 3 and 11 yards.

LSU was balanced offensively, rushing 33 times for 122 net yards. Clyde Edwards-Helaire had team highs of 45 yards on nine carries including a 1-yard touchdown on the Tigers’ second drive.

Georgia Southern managed only eight first downs and was 1-of-12 on third down against a fast and furious LSU defense coach Ed Orgeron challenged prior to the season to dominate opponents.

The run-first Eagles managed only 74 yards on 39 rushing attempts, while completing only 4-of-11 passes for 24 yards.

Georgia Southern won the coin toss and deferred its decision until the second half. LSU elected to receive and defended the south end zone. LSU received the opening kickoff and needed just 2:24 and six plays to record the game’s first score, a 13-yard TD pass from quarterback Joe Burrow to wide receiver Ja’Marr Chase that culminated a 75-yard drive.

The march was highlighted by a 44-yard pass from Burrow to wide receiver Justin Jefferson that gave the Tigers a first-and-goal at the three-yard line. LSU was backed up 10 yards on the next play by a holding penalty, but Burrow hit Chase on the subsequent snap to give the Tigers the lead.

The Tigers quickly covered 34 yards in six plays as running back Clyde Edwards-Helaire increased the advantage to 14-0 on a one-yard touchdown burst.

After another three-and-out for the Eagles, LSU drove 52 yards in 10 plays, capping the march with a nine-yard scoring pass from Burrow to Jefferson. The drive featured a 4th-and-1 conversion at the Georgia Southern 32-yard line when running back Lanard Fournette dashed 10 yards to the 22.

LSU defensive tackle Rashard Lawrence sacked Georgia Southern quarterback Shai Werts on the second-to-last play of the first period, forcing a fumble that was recovered and returned to the Eagles’ 26 by linebacker Patrick Queen.

The Tigers reached paydirt five plays later on an eight-yard strike from Burrow to wide receiver Terrace Marshall Jr., widening the gap to 28-0 with 13:10 left in the second quarter. The touchdown marked the first career scoring reception for Marshall.

LSU forced another turnover on the Eagles’ next possession when outside linebacker K’Lavon Chaisson forced running back Matt LaRoche to fumble, and the ball was recovered by safety Grant Delpit at the Georgia Southern 25-yard line.

Burrow connected with running back John Emery Jr. for a 17-yard gain to the Georgia Southern eight-yard line, and two plays later, Burrow fired to Marshall for a three-yard TD completion with 9:58 remaining in the first half.

LSU scored a touchdown on its first five possessions of the game, marking the first time it had accomplished the feat since September 6, 2014, versus Sam Houston State.

Georgia Southern got on the scoreboard with 5:13 left in the half when placekicker Tyler Bass nailed a 47-yard field goal, capping a 10-play, 45-yard drive.

The Tigers scored again on their final possession of the half, culminating an 80-yard, five-play march with a touchdown strike from Burrow to Marshall. The drive was highlighted by a 44-yard completion from Burrow to tight end Thaddeus Moss to the Georgia Southern 21.

Burrow tied the LSU single-game record with this fifth touchdown pass, equaling the effort of Zach Mettenberger, who threw five TD aerials against UAB on September 7, 2013.

The Tigers’ 42 points marked their most in a first half since November 1, 2003, when LSU scored 49 in the first half against Louisiana Tech.

LSU freshman placekicker Cade York was successful on his first career field-goal attempt, hitting a 38-yarder with 10:48 remaining in the third quarter, giving the Tigers a 45-3 lead. LSU moved 44 yards in seven plays to set up the three-pointer.

LSU backup quarterback Myles Brennan engineered a nine-play, 59-yard drive that was capped by running back Lanard Fournette’s two-yard TD run, giving the Tigers a 52-3 advantage at the 5:47 mark of the third quarter.

York added another field goal with 10:58 left in the contest, this time connecting on a 48-yarder.