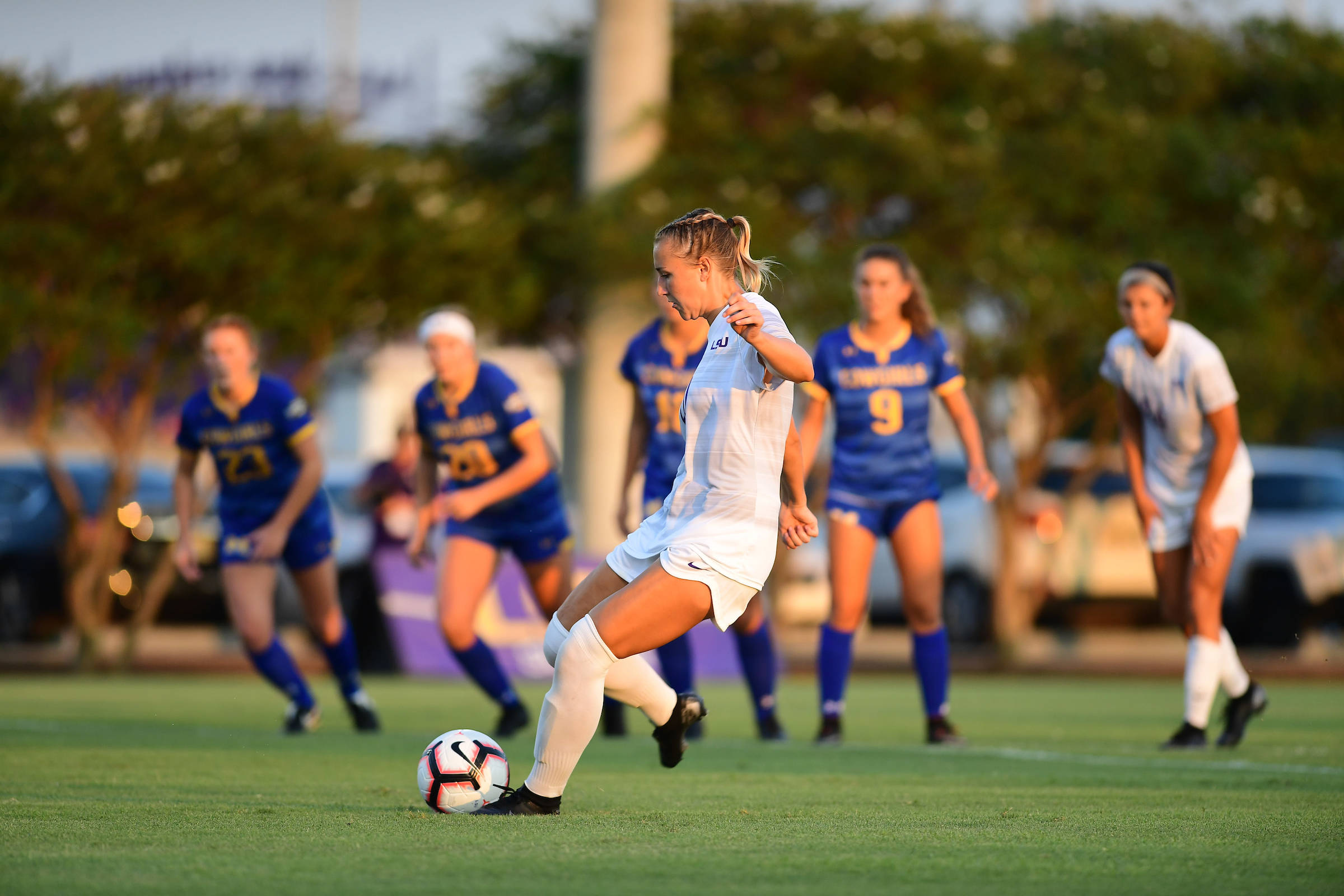 Baton Rouge, La. – The LSU soccer team (2-1-0) played under the lights of the LSU Soccer Stadium for the first time this season after playing the first two games of the season on the road. The Tigers were victorious against the Cowgirls from McNeese State (1-1-0) by a score of 1-0.

They talk home opener, energy, and how the team is progressing.#GeauxTigers pic.twitter.com/288eu9kLnq

LSU’s goal was off a penalty kick conversion by senior Marlena Cutura. Maddie Moreau, a freshman from Youngsville, La., got it all started with a solid run down the middle of the pitch into McNeese territory. Sensing two defenders collapsing on her, she made a pass just in the nick of time to a streaking Molly Thompson to her right. The ball was played so beautifully that Thompson had a 1v1 against McNeese’s keeper, Kelly Hines. Thompson played a small touch and was in the midst of maneuvering her way around Hines when Hines fouled her resulting in a penalty kick for Cutura. Cutura toed the spot and put it in the back of the net to give LSU the lead in the third minute of the match, and the Tigers would never look back.

The Tigers dominated the first 45 minutes of play. They had four additional shots on goal compared to the zero from McNeese State. Moreau was all over the place Friday night creating a handful of opportunities for herself and her teammates. Shortly after Cutura’s PK conversion, Moreau made her way into the left side of McNeese’s box but her shot from 12 yards out was saved. In the 24th minute, Moreau crossed a ball into Meghan Johnson; Johnson played it down and made a sliding shot attempt from 10 yards away, but that attempt was blocked before it could get on net.

A corner kick in the 38th minute for LSU resulted in two good opportunities. Chiara Ritchie-Williams took the first rip on a loose ball from the right side of the box. Less than 30 seconds later after McNeese attempted to clear the ball, Courtney Henderson played a nice touch to Johnson who weaved her way past three defenders and had her shot saved by the McNeese keeper. Rammie Noel found herself on the endline late the first half and she managed to toe flip the ball up and over the keeper but it didn’t’ have enough angle and rolled wide left.

Two other scoring chances arose for the Tigers in the second half. In the 54th minute Cutura and Johnson teamed up on a give and go that saw Johnson nutmeg a McNeese defender. Cutura ripped a low, left-footed shot that forced a diving save by Hines. The final opportunity came after Moreau played Alexander into McNeese territory in the 67th minute. Alexander drew two defenders and put a pass out to the left for Shannon Cooke whose one touch left footed curler was grabbed by a leaping Hines.

Emma Grace Goldman made three saves in the second half to secure her second-career shutout. Caitie Cantrill made her 2019 season debut and the Tigers used

LSU will take on Samford Sunday at 2 p.m. CT in Birmingham, Ala., at Ellis Field.

The Tigers have won the only previous two matches against Samford in program history. The first meeting came back in 2007 on Nov. 16  in LSU’s first-ever appearance in the NCAA Tournament. Roslyn Jones headed in the gamewinner in the 107th minute of the second overtime frame to advance LSU to the Round of 32. The second meeting came a year ago and LSU won the match by a score of 2-0 in Baton Rouge. This will be LSU’s first ever match at Samford; the 2007 NCAA Tournament game was played in Tallahassee, Fla.

You’d have to go all the way back to 2008 to recall the last time that Samford did not reach double digit wins. The Bulldogs are 1-1-1 on the season with a 2-0 loss to Murray State on Aug. 25 and a nil nil draw with UAB on Aug. 22. They defeated Western Kentucky Friday night. Samford is picked to finish second in the preseason Southern Conference and they are looking to win their sixth-straight SOCON title this season. Erin Bonner (6 goals) and Caroline Orman (4g & 1a) are the two biggest offensive threats for Samford. They will take on Western Kentucky on Friday night before hosting LSU Sunday afternoon.