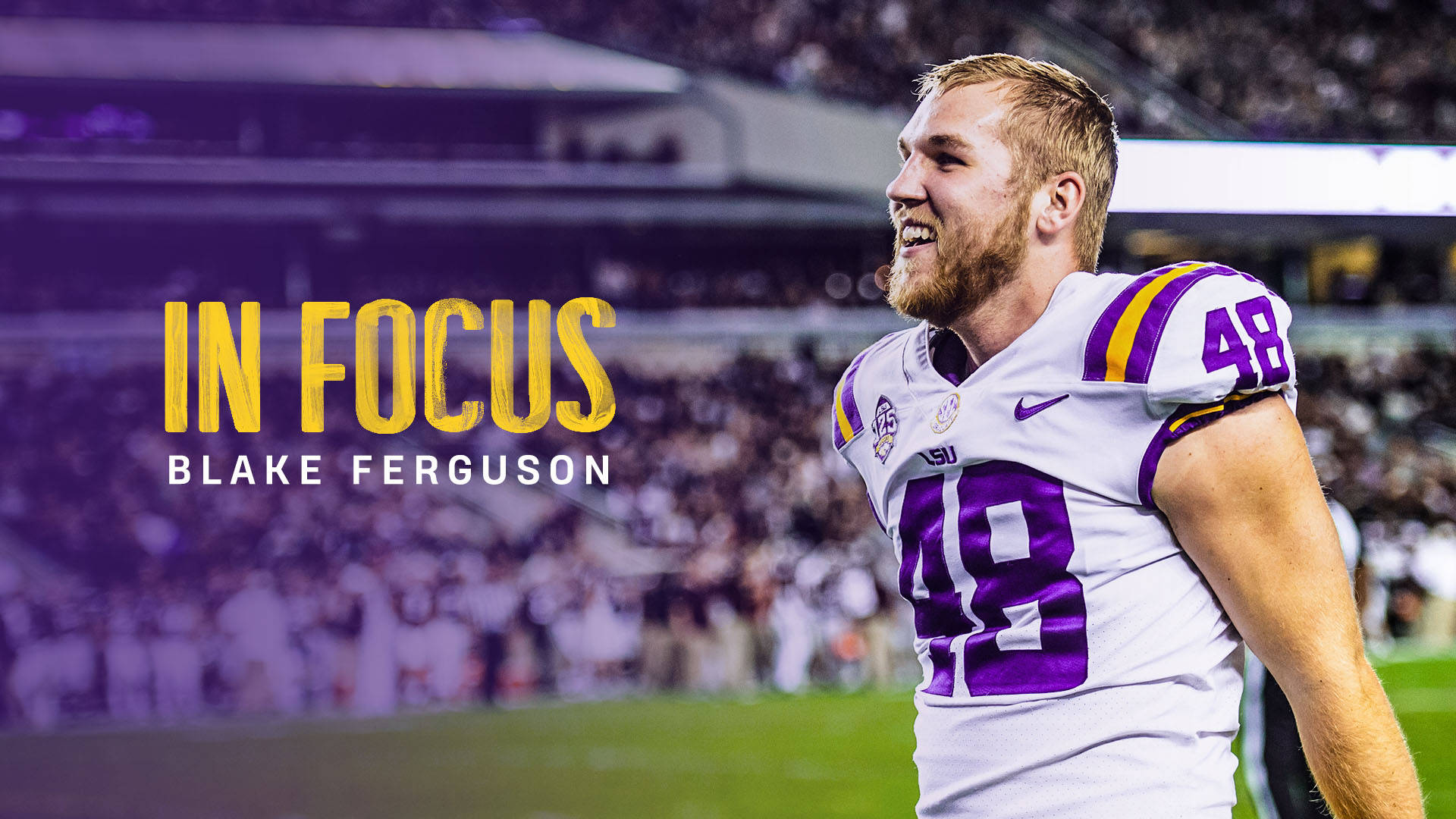 Back in row 25, his father, Kevin, crammed his knees into the seat in front of him, surely regretting his decision to give his son a hard-earned upgrade.

“Luckily,” Blake says, “he still gave me his upgrade on our flight the next year. But he was pretty upset.”

Every athlete’s journey is different, but few rival the Ferguson family’s forays – in miles traveled, games attended, and flights delayed.

Since Reid – the firstborn Ferguson and the founder of the family’s long-snapping dynasty – first stepped foot on LSU’s campus in 2009 for a specialists camp, surely no household has covered near the distances demanded by their sons’ sport of choice.

For a decade, Kevin and Tracy Ferguson have traveled the country, pursuing Reid and Blake’s dreams of snapping in the SEC and NFL right alongside their sons.

Since Reid first threw a ball backwards between his golden-panted legs in the 2012 season, they have not missed a single LSU game – not even after Reid left for the Buffalo Bills and Blake took over as the Tigers’ snapper in 2016.

Every game, every season, every snap, if a Ferguson was on the field, another was in the stands.

“My parents are troopers for what they do,” Blake says. “Luckily, we are blessed enough to be in the position to where they can take off on Fridays and Mondays if they have to travel. And obviously, it’s a big financial burden as well. So being able to do that as well is such a blessing.”

Both Blake and Reid prepped at Smyrna, Ga., football factory Buford High School, owner of 11 state championships, including two for Reid (2008, 2009) and three for Blake (2012, 2013, 2014). It was Reid who first picked up snapping as an eighth grader at his dad’s behest. Initially, it was a chance to simply get more playing time, but before long, Reid realized it could be a chance to get a scholarship, too.

Kevin still remembers driving the boys to school one day and telling them to take the position and make it their own. Who knows where this journey can take you?

“You just need to set your goals,” Kevin recalls saying. “Your first goal is to play on Friday night , then play on Saturday, and if it’s meant to be, play on Sunday.”

If their kids were going to pursue anything, the Ferguson parents had one rule: pursue it as hard as you can, and we will, too.

“My parents, from the time we were little until now, have always been 100 percent behind everything that we do,” Blake says. “They back us 100 percent. I can remember when I was little, my mom and dad telling me, ‘If you want to be a doctor, if you want to be a lawyer, whatever you want to be, we’ll find a way to make you that.’”

When we don’t have anything else, we always got them.

After picking up the position in junior high, Reid started attending former NFL snapper Chris Rubio’s camps in Georgia, finding he had an aptitude for the craft and parlaying his success with Rubio into attendance at college specialist camps. While none of the programs in their home state showed much interest, Reid landed offers from Tennessee and LSU.

“Both my parents are Tennessee alums,” Blake says. “My dad’s actually from Knoxville. And that would have been obviously closer to home than coming all the way down to Baton Rouge.”

It must have been tempting to follow in their parents’ footsteps. Knoxville is just a four-hour drive from where the Ferguson family lived at the time, and just two-and-a-half hours from where they live now.

“When Reid asked us, ‘Hey, what would you like for me to do?'” Kevin recalls, “I said, ‘This is your decision, not ours. You need to do what you think is best for you.’ He just had built such a relationship with the whole LSU program, I think he had already started to picture himself there.”

Reid picked LSU and was Baton Rouge bound, and his family followed. In the blink of an eye, Blake – who started snapping in seventh grade – became both an LSU fan and an LSU prospect. Three years his brother’s junior, Blake became a Tiger Stadium regular during football season, falling in love with the same atmosphere his brother did and developing relationships with prospects who would eventually become his college teammates.

“When I was in high school, we never missed a game,” Blake says. “We would fly Saturday morning to Baton Rouge after my game on Friday night, and we would be there around midday for that. We hardly ever missed unless I had to for football. So it was a lot of fun coming to see Reid, and obviously as a recruit, that was a lot of fun – being able to be here and get to know the other recruits and making relationships here as well.”

Only once or twice in Reid’s first three seasons at LSU did the brothers’ schedules conflict. Buford’s annual foray deep into the Georgia high school state playoffs would occasionally mean the parents had to split up.

“There were a couple games when I was in high school that they had to split games, one go to one game, one go to the other, because I was in the playoffs late in the season and Reid was still playing,” Blake says. “But they haven’t missed a game.”

“It’s worth making the effort,” Kevin says, “because they won’t play forever. It could go away tomorrow, and you’re just grateful for the time you do have.”

The brothers’ LSU careers overlapped for a single season in 2015, when Reid was a senior and Blake was redshirting as a true freshman – a brief respite from the two-game-per-weekend grind. The next year, Reid landed with the Buffalo Bills, adding more miles and memories to the slate.

Blake estimates his parents fly five or six days out of some weeks during football season, a schedule he occasionally experiences when the Tigers’ wrap up the regular season in December.

Take Christmas 2018, for example. Blake flew home to Atlanta on the 22nd, then hopped on a plane to Boston on the 23rd for Reid’s game against the Patriots. On the 24th, he was back on a plane to Atlanta for Christmas on the 25th. On the 26th, he flew back to Baton Rouge for bowl preparation, before the team flew to Phoenix on the 27th for the Fiesta Bowl.

“It was,” Blake laughs, “pretty hectic.”

It could’ve been worse. In fact, the year before, it was worse. The 2017 trip to Boston for a Christmas Eve Bills-Patriots game went smoothly enough, but the return flight on a snowy Christmas morning was the wayward snap of holiday travel arrangements.

“We were on the plane, we’re getting ready to take off,” Blake remembers. “And as we were getting ready to back away from the gate, they said, the entire airport is shut down until the storm passes. It started snowing, and you couldn’t even see out the window, it was snowing so hard. We sat there for like three hours before everyone took off.”

Of course, Blake sat in first class, the happy recipient of that crucial upgrade.

“Blake and Tracy are eating a nice catered meal,” Kevin recalls, “and I’m back there eating a pack of peanuts i saved in my backpack. Blake walked me a banana back there and said, ‘Here, I saved this for you.'”

Travel enough, and you’ll collect a few similar stories. The Fergusons have plenty, but it’s a collection they’re happy to have. They know their sons play a role that is limited – a handful of snaps every game on punts, field goals and extra points. But it’s a vital one, too, which is why it’s vital for them to be there.

They’ve also found that being there matters to their LSU family, especially after hard-fought road games.

“I feel like, not only have we been there for our boys, you get to know the other players and build relationships with them. We fulfill a need for them, too, because it’s a friendly face, a handshake or hug after the game to get them a feeling of home and someone they know.”

The end of that journey is near, at LSU at least, as Blake enters his final season of eligibility. He’s got a chance to follow his brother into an NFL career, and Kevin and Tracy plan to keep following.

Their seats may change, but their mission won’t. Wherever a Ferguson is snapping, there’s another in the stands – from Baton Rouge to Buffalo, and any destination in between.