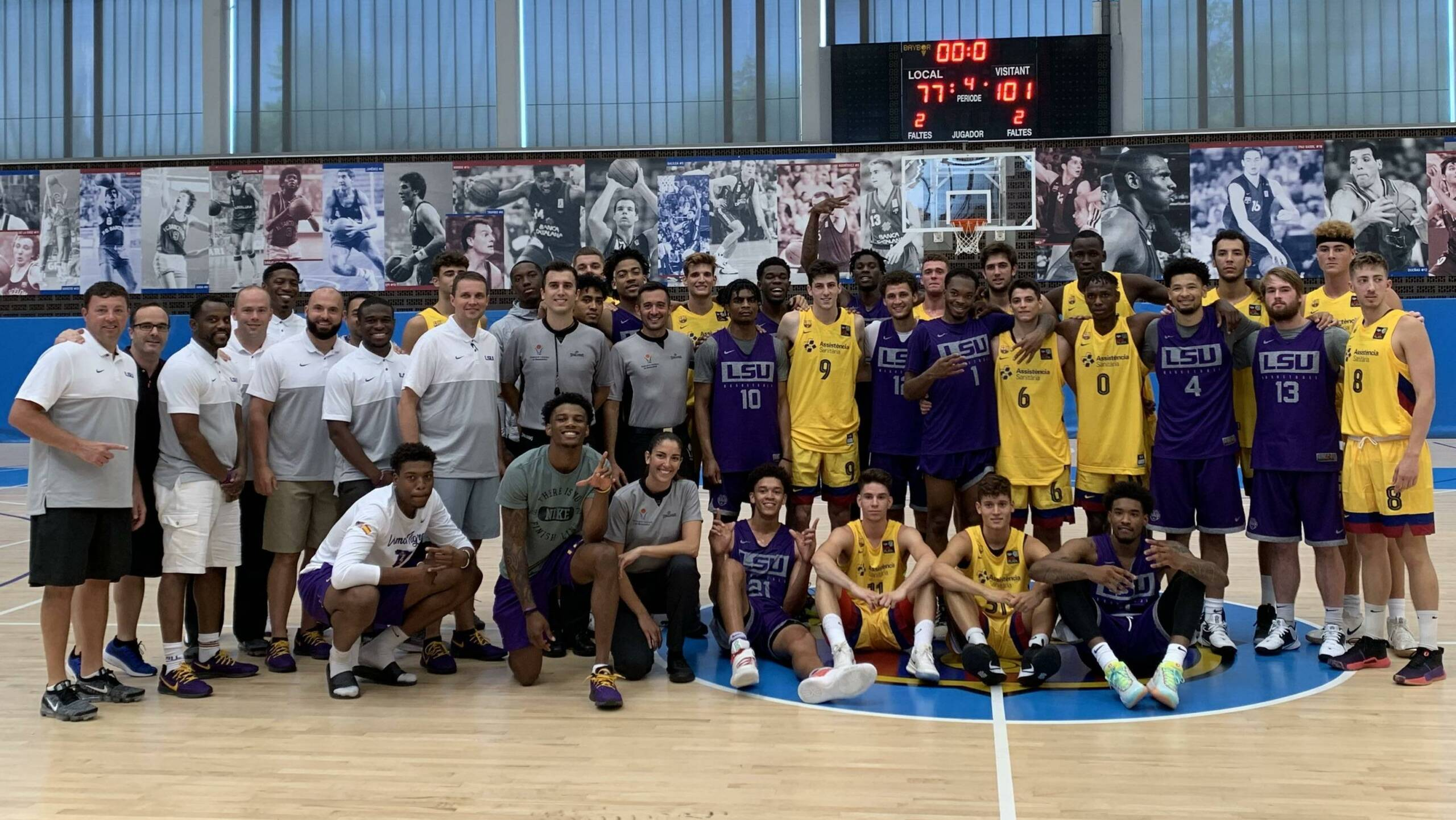 BARCELONA, Spain – LSU completed its four-game tour of Spain with a workmanlike and balanced win over its second toughest opponent, the FC Barcelona B squad, 101-77, Wednesday at the Ciutat Esportiva Joan Gamper, the training grounds for all the FC Barcelona squads.

As the LSU team arrived late morning at the heavily controlled site, several dozen fans were outside the facility waiting to catch a glimpse and possibly an autograph from the football (soccer) team which was practicing on the other side of the complex.

LSU finishes the tour at 3-1, following up an 92-88 loss to the Dominican Republic with wins over All-Star teams from Valencia and Barcelona and the FC Barcelona team, scoring over 100 points in each of the last three games.

For the third straight game, LSU had at least six in double figure scoring with Darius Days leading the way with 15 points. Charles Manning Jr., was really good in the game scoring from inside and outside the arc to get 14 points, the same total that Trendon Watford and Skylar Mays totaled. Mays went inside again several times for easy buckets including one time he tangled and scored with the 7-1 Badji.

Javonte Smart and Emmitt Williams had 13 points each for the game. Smart had five assists and Williams was the leading rebounder with 8.

“I thought we played better. This is probably the best game since we’ve been here. I thought our defense was a little crisper. We did a little more switching than we have been doing,” said third-year LSU Coach Will Wade. “I’ve very, very impressed with Charles Manning. He’s been tremendous all trip. He’s so solid and affects winning in so many ways. You could see that out there today. He’s going to be a huge component for us this season. He’s a really, really good player and that showed throughout this trip. That’s one of my biggest takeaway from the trip how solid he is and how much we are going to be able to count on him and depend on him this coming season.

“The stat sheet read like it needed to,” Coach Wade said. “We beat them 60-32 in the paint. We doubled them up in the paint. We forced 23 turnovers and only turned it over ourselves nine times. Three or four of those were us trying to get the ball inbounds. Two were side out-of-bounds, two were full court inbounds. Stuff we haven’t spent a lot of time working on yet preparing for the trip. That’s stuff we can clean up on and cut the nine turnovers down to four or five. But forcing them to 23 turnovers and then doubling them up in the paint that’s how we are going to have to play.”

After FC Barcelona took the lead early at 10-7 highlighted by a 7-0 run, the Tigers eventually got the lead back for good at 12-11 with 4:31 to go in the first quarter and were never headed, leading 21-16 after the first ten minutes.

In the second quarter, FCB would tie the game at 23-23, but LSU continued to force FC Barcelona mistakes and got the lead to 10 twice, the last at halftime at 48-38.

LSU closed the half with two free throws and a steal and score and then opened the third quarter with 10 straight points, their longest run of the game at 14, to take the lead to 58-38 before the host team could get a free throw.

FCB tried to pressure the Tigers man-to-man full-court a lot of the game, but not with a lot of success.

“Once we got it in, we were able to use our quickness and our athleticism,” said Coach Wade. “We have the court a lot more spread now with the new offense. It’s not so ball screen-centric. When the court is spread, the paint is open. It’s basically one-on-one once you get by the guy. You just have to keep him on your hip and go in and finish. I wish we’d done a little bit better job of finishing. We missed four or five layups and they hit two or three threes off our missed layups because it puts your transition defense in a tough spot. But overall we got good film. We got a lot of stuff we know we need to go back and get better at and know that we need to go back and correct. Now it is on us to go back and get to work.”

The Tigers will fly back on Thursday to the United States and the players will prepare for the start of the fall semester at LSU which begins on Monday.