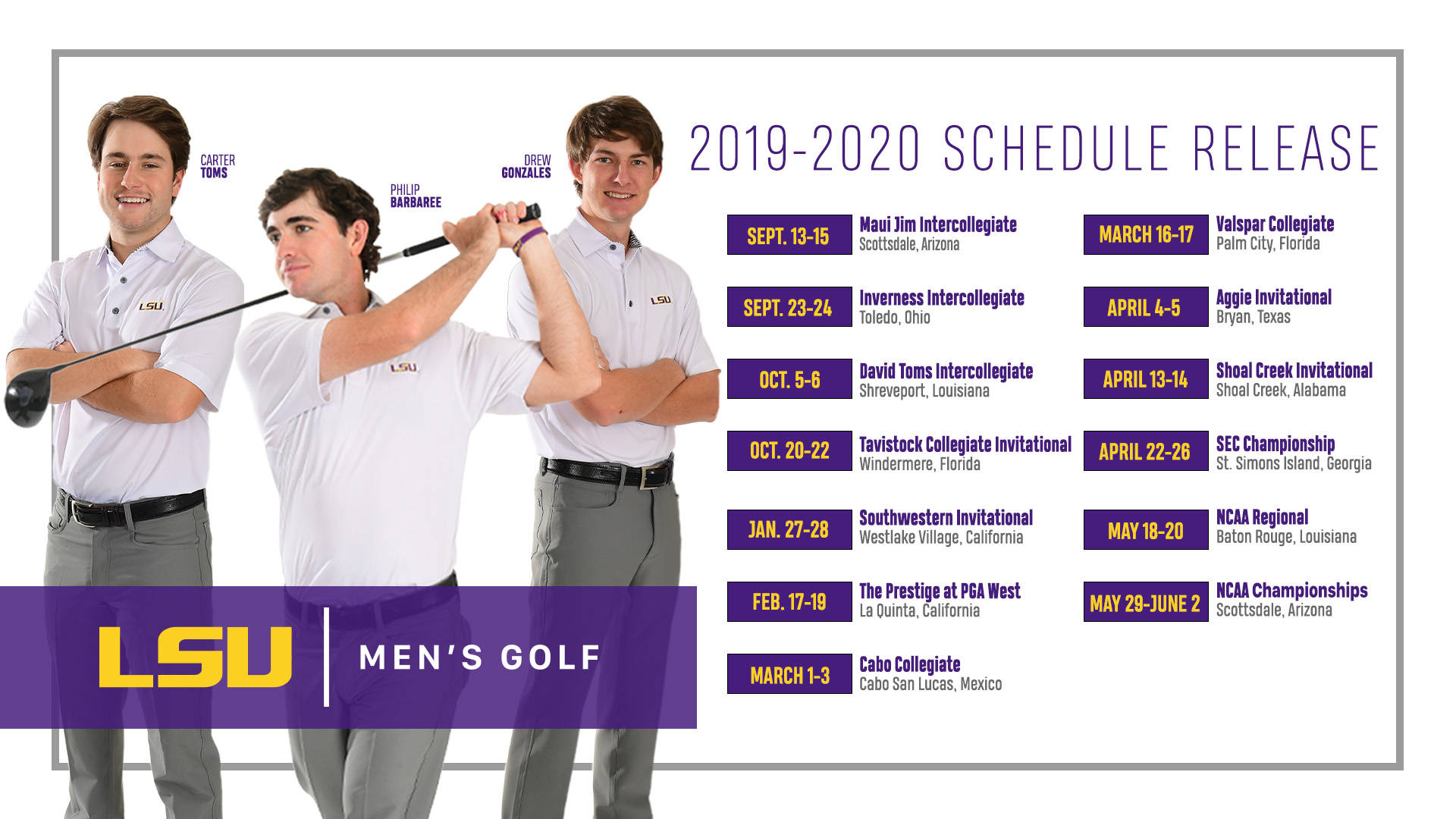 The fall portion of the schedule will feature four tournaments while the spring will have the other nine. It’s right back to action shortly after classes begin for the Tigers with a trip to Scottsdale, Ariz., for the Maui Jim Intercollegiate Sept. 13-15. Tournament No. 2 of the season will come a little over a week later with the Inverness Intercollegiate in Toledo, Ohio, hosted at the Inverness Club (Sept. 23-24).

A little bit of a twist comes into play with the 2019 David Toms Intercollegiate as it will be hosted at Southern Trace Country Club in Shreveport, La., Oct. 5-6. The Tigers are not allowed to host a home tournament during the 2019-20 regular season at University Club due to NCAA rules prohibiting a team hosting a tournament at the same course it will host a NCAA Regional at later that season. The NCAA Baton Rouge Regional will be played at University Club (May 18-20) in 2020. It will be LSU’s first time hosting the David Toms Intercollegiate at Southern Trace since 2011.

The fall season will wrap up with the Tavistock Collegiate in Windermere, Fla., Oct. 20-22 at the Isleworth Golf and Country Club.

The Tigers will get 2020 started by playing back-to-back tournaments in the state of California. First up will be the Southwestern Invitational at the North Ranch CC in Westlake Village on Jan. 27-28; the Tigers will make a return back to California in mid-February as they will look to defend their 2019 team title at The Prestige at PGA West in La Quinta.

LSU will tee it up twice in the month of March with the Cabo Collegiate (March 1-3) and Valspar Collegiate Invitational (March 16-17). The Cabo Collegiate will take place in Cabo San Lucas, Mexico, while the Valspar will be contested in Palm City, Fla., at the Floridian GC.

The month of April will see the Tigers play their final two regular seasons tournaments – Aggie Invitational (April 4-5/Bryan, Texas) and Shoal Creek Invitational (April 13-14/Shoal Creek, Ala.) – before postseason play begins. The SEC Championship will be contested, per usual, at the Sea Island GC in St. Simons Island; that event will take place from April 22-26.

The 2020 NCAA Regional at University Club will take place May 18-20 and the top five teams at that tournament will earn a bid to the NCAA Championships which will begin on Friday, May 29, and carry through Tuesday, June 2, in Scottsdale, Ariz., at the Grayhawk GC.