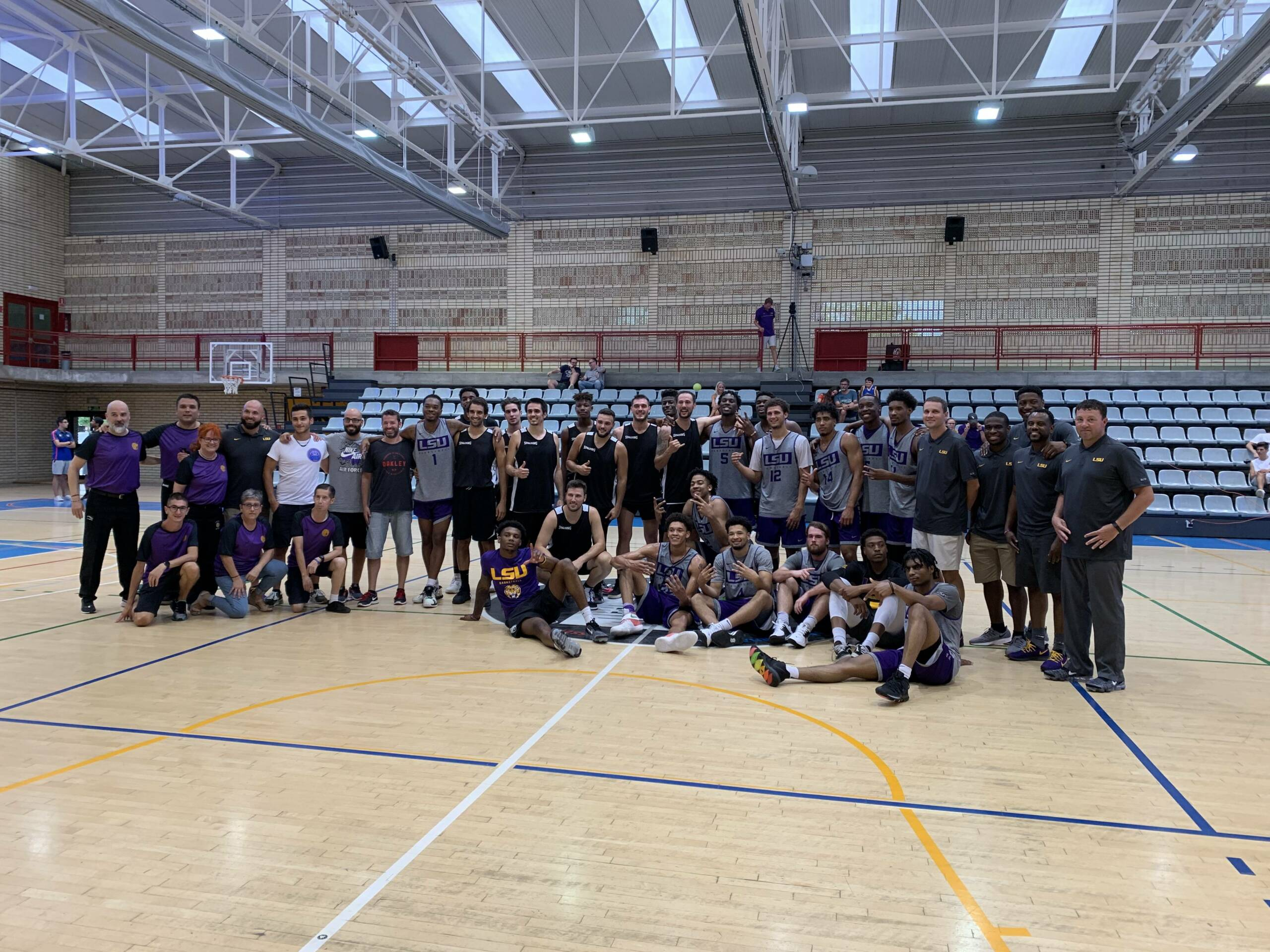 BARCELONA, Spain – For the second straight game, Coach Will Wade was allowed to experiment with several different quintets against a Barcelona All-Star team that was content to shoot three-pointers and the result was a 107-78 win Tuesday for the LSU Basketball Tigers to run their record to 2-1 on the Spain exhibition tour.

There will be little time for resting as LSU will play its final game on Wednesday at noon CET against the FC Barcelona Silver Team (part of the famed FC Barcelona sports program that includes its soccer (football) team and facility which the team toured on Monday evening after arriving here.

“We’ve got to get back and get back at it early (Wednesday),” Coach Wade said. “We are playing a really good team. They’ve got a potential NBA lottery pick, a seven-footer. We will see how we do against a bigger, more physical team. A team that has been playing together for a long time. (Wednesday) will be a big test just like the Dominican Republic game was and hopefully we have improved since that game and we’ll be better than we were at the start of the trip.”

The Tigers had another good offensive day with seven players scoring in double figures and using a couple of runs in the first half to separate themselves from the All-Stars. According to the final stat sheet, Courtese Cooper and Marshall Graves each had 13 points for LSU, with Trendon Watford and Emmitt Williams scoring 12 each, James Bishop and Charles Manning Jr., each totaled 11 and Aundre Hyatt had 10 points.

Cooper led a 47 rebound effort with 12 boards. The Tigers had 26 assists on 39 made field goals (including 10 treys) with six assists for Bishop and five assists for Javonte Smart.

Barcelona made 23 field goals in the game, 16 were three-pointers as they attempted 46 shots from outside the lane, passing up at least eight to 10 opportunities under the basket to throw it back out for a three.

LSU outrebounded the All-Stars by a 47-28 advantage.

All 12 players that dressed played and scored. Parker Edwards, the walk-on transfer from Southeastern, scored his first points on the tour and totaled nine with two assists.

“It was good to get some guys some minutes,” said Coach Wade. “See what some guys can do in some game situations they may not have been in before. I thought Cooper made some good progressing finishing around the rim, had a couple good blocks to protect the rim. Our offense was good as it has been. Our defense was a little bit better. We did a little bit more switching. Overall it was good for our guys.

“They shot a ton of threes and they played some zone,” Wade noted of the Barcelona’s style of offense and defense. “We hadn’t seen much zone over here so it was good for us to work on our zone offense to be able to go against a zone and realize we don’t need to settle for threes all the time against the zone. I thought it was overall a good learning experience and we need to carry it over.”