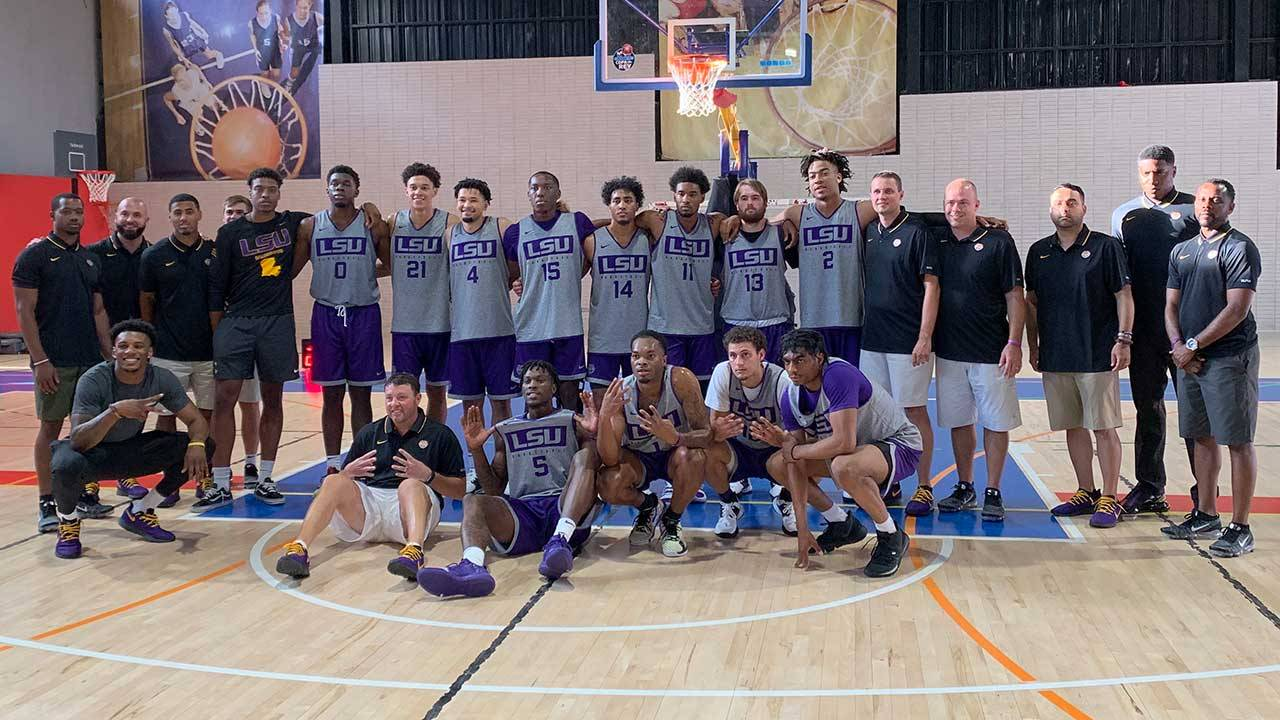 MADRID, Spain – The LSU men’s basketball team got 28 points and nine rebounds from Emmitt Williams but gave up points in the paint late after rallying to take a lead, falling to the Dominican Republic National Team, 92-88, Thursday night at the Comunidad de Madrid.

The game was the opener of the NCAA-allowed once-every-four-years exhibition tour of Spain by LSU against an older and more experienced team that is 18th in the FIBA World Poll and warming up for the FIBA World Cup in China that begins at the end of the month.

LSU was able to rally from 10 down in the third quarter, 64-54, and came all the way back to take the lead after an intentional foul on Javonte Smart led to two free throws and a Charles Manning Jr., put back on the in-bounds that gave LSU the lead for the first time in the second half at 81-80 with less than four minutes to play.

Marshall Graves, two possessions later, would drive the lane to give LSU an 85-82 advantage with 2:42 to play. From there, the Dominican Republic scored 10 points to LSU’s three for the final margin.

Besides Williams, Tendon Watford had 18 points with Javonte Smart and Skylar Mays each getting 12.

The Dominican Republic team, which will play Spain in its final tune-up here next week, was led by Eulis Baez with 14 points. Rigoberto Mendoza and Victor Liz had 13 points each. Juan Miguel Suero had six rebounds as did Juan Jose’ Garcia to lead the winning team, which out rebounded the Tigers, 35-33.

The Tigers shot 32-of-66 in the four ten minute quarters played with the 24-second shot clock under FIBA rules with six treys, while the Dominican Republic shot 32-of-66 with 7 treys. Both teams shot a healthy amount of free throws in the five fouls a quarter results in two free throws rules. LSU was 18-of-24, while Dominican Republic was 21-of-29.

“Emmitt I thought played really well. I’m really proud of him,” said Coach Will Wade after the game. “I thought we got off to a great start and then their physicality just wore us down as the game went on. They are just older and bigger. We just wore down as the game went on. It was kind of what we did last year. We hung around, hung around and we made a game of it but we get out of the way and don’t take a charge late in the game and they take a charge late in the game. Those are the details that we really took care of in the past, but we didn’t take care of today.

“But overall for Emmitt to almost have a double double with 28 points and nine rebounds, I thought he played phenomenal. Outside of that, we were average at best,” Coach Wade said. “Our defensive rebounding wasn’t where we want it to be. We turned the ball over way too much (16). The reason we were able to get back into the game in the fourth quarter was we didn’t turn the ball over in the fourth quarter. So we were able to get back into it that way. We have a lot of work to do. We knew that coming in.

Williams had a good opening period for the Tigers as they jumped out to a 19-8 lead with just under five minutes to go in the first quarter, but the Dominican Republic began to establish its game and outscored the Tigers 44-29 the rest of the half to take a 52-48 break into intermission. Several of the points came off LSU turnover situations. LSU led 25-19 after one, but was outscored 33-23 in the second and the lead was at 72-63 after three quarters before LSU rallied.

“It’s a great opportunity for us to play against a very good team,” Coach Wade said of the Dominican Republic. “They run as good an offense as we will see all year. They are physical like playing a Houston or a Michigan State or somebody like that. It will be a good learning experience as we move forward here.”

The Tigers will travel to Valencia on Friday and will play the Valencia All-Stars on Saturday in a game that has seen its start time moved up to 5 p.m. CET (10 a.m. CDT in Baton Rouge). LSU’s other two scheduled games are next week in Barcelona before the team returns home on Aug. 22.