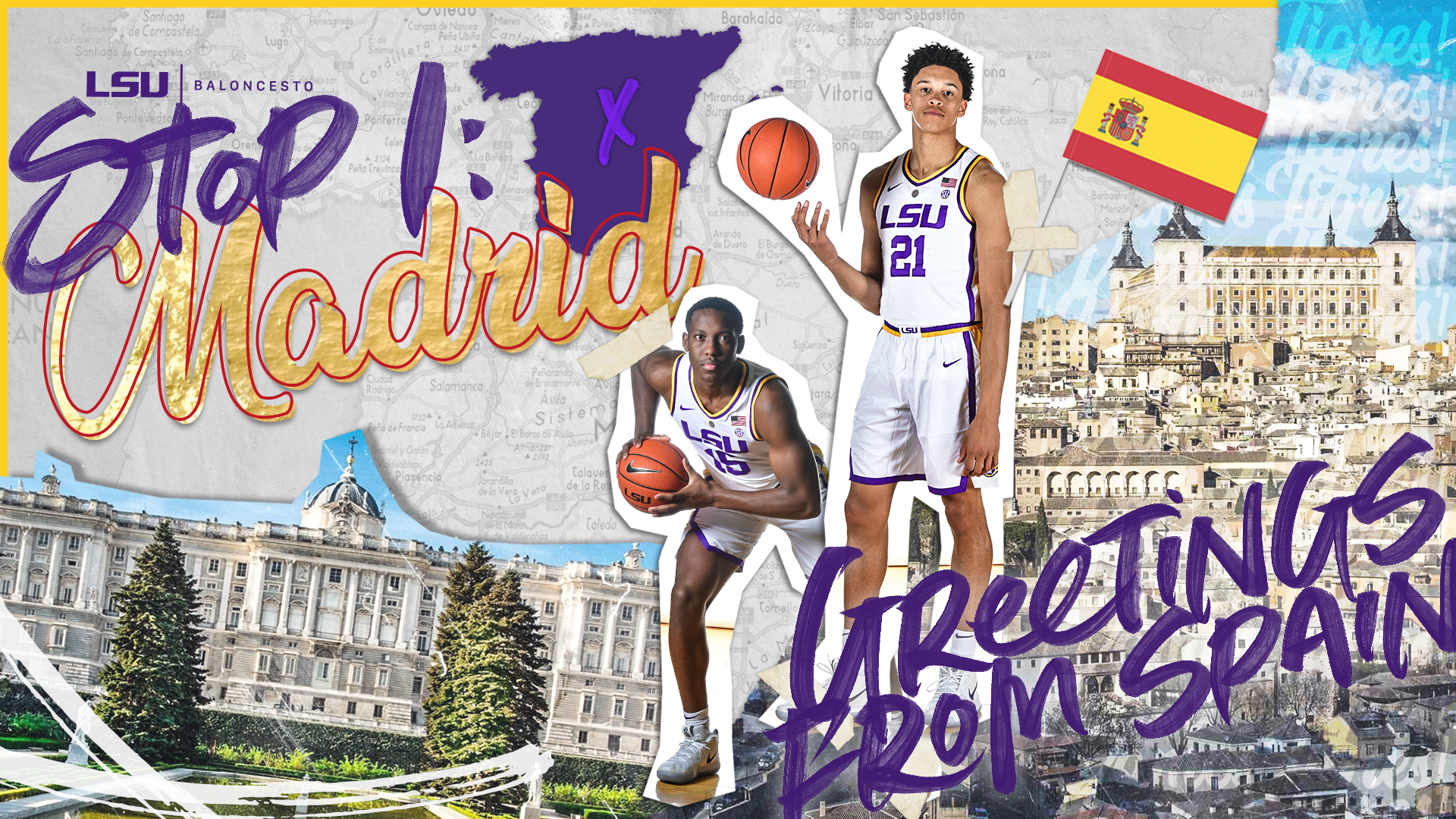 MADRID, Spain – The LSU Basketball team on Day 3 of its 2019 Spanish exhibition tour boarded a bus at its hotel and traveled the 72 meters (44 miles) from Madrid to the historic city of Toledo where they toured on Wednesday many of the highlights of the city named in 1986 a “World Heritage Site.”

Basketball will take center stage Thursday night as LSU will face the No. 18 team in the FIBA world poll from the Dominican Republic. The Dominican Republic will play this game and a game next week against Spain as it prepares for the FIBA World Cup in China at the end of August. More on that later in this article.

The Tigers took a walking tour with Toledo native Samuel, who is one of several people who are hired as tour guides in several different languages. Samuel provided the narrative in wonderful English of a tour that started in the town square and through two different parts of the historic city that featured steep hills and dodging cars in streets barely wide enough to allow walkers and cars to make it unscathed.

Toledo is known as the Imperial City and the City of Three Cultures for the influences of Christians, Muslims and Jews reflected in its history. The old city LSU toured is on a mountaintop surrounded on three sides by a river. The city is just 89.6 square miles with a population of over 83,000.
—

Thursday at 7 p.m. Central European Summer Time (Noon Central Daylight Time in Baton Rouge) the Tigers will open their exhibition tour on court against the Dominican Republic National Team, in a change of opening opponents that was made just before the team left Baton Rouge for Spain by Global Sports Management which is overseeing the management of the tour.

The Dominican Republic team is in Spain preparing for the World Cup and was looking for a game prior to its friendly with Spain next week and Global and LSU were able to change the teams out for the first game and make things work.

What LSU has inherited is what Head Coach Will Wade has called a “tough opponent” that will feature some names that may have a familiar ring for those who have followed college basketball in the last decade or so.

For example, Eloy Vargas graduated from Kentucky in 2012 and played in 71 games for the Wildcats during the 2011 and 2012 seasons. Edgar Soza is expected to be one of the starting guards for the Dominican Republic who played for Louisville from 2006-10 and in 140 games had a career average of 9.7 points.

Eulis Baez has done well for the Dominican Republic averaging 12.5 points, 6.0 rebounds and 3.3 assists a game. He played collegiately at Florida International and West Illinois. Victor Liz is the leading scorer in 2019 for the national team, averaging 13.7 points per game and Rigoberto Mendoza averages about 10.7 a contest.

The Tigers worked out under NCAA rules prior to leaving for Spain, opening team workouts on July 30. Coach Will Wade said in a media session prior to the first practice that there will be very little to gleam from those worrying about game minutes and lineups he may use during the exhibition.

“We are going to see how different guys react,” Wade said at the time. “I know what Javonte (Smart) and I know what Skylar (Mays) can do, so playing them 30 minutes a night will not do a whole lot for our team. I am much more interested in James Bishop to see if he can take the things he learned on the practice floor into a game. I am looking to see what Charles Manning can do. I want to see how Trendon (Watford) looks. How does (Darius) Days look as he just played spot minutes last year, as well as Emmitt (Williams) in a much more featured role? I am a lot more interested in Courtese Cooper, Aundre Hyatt and Marshall (Graves) and how they look. We will not play Skylar and Javonte more than 15 minutes a game because I know those guys can play and it is not the point of us going over there. We need to get these other guys major minutes and see how they react in different situations.

“I will (probably) start a different line-up each game as I have done that in the past. It is whatever I think will work and we want to see different things so we will definitely plan the line-ups that way. We will get to see who plays well together and who plays well off each other and get a feel for that.”

This will be the first of four games scheduled for the trip with the team scheduled to leave Madrid on Friday for the bus trip to Valencia where the team will play its second game against a Valencia All-Star team on Saturday night. The other contests in Barcelona are set for Aug. 20 and Aug. 21.

The team will take a walking tour a short distance from the team hotel here Thursday morning to the Royal Palace. It is the official residence of the Spanish Royal Family in Madrid, although now it is used only for state ceremonies. It is the largest functioning Royal Palace and the largest by floor area in Europe.

There will be no broadcast or streaming video of the game, but updates will be available on Twitter @LSUBasketball during the contest and a full recap with comments from Coach Wade will be posted on LSUsports.net as soon as possible after the game.