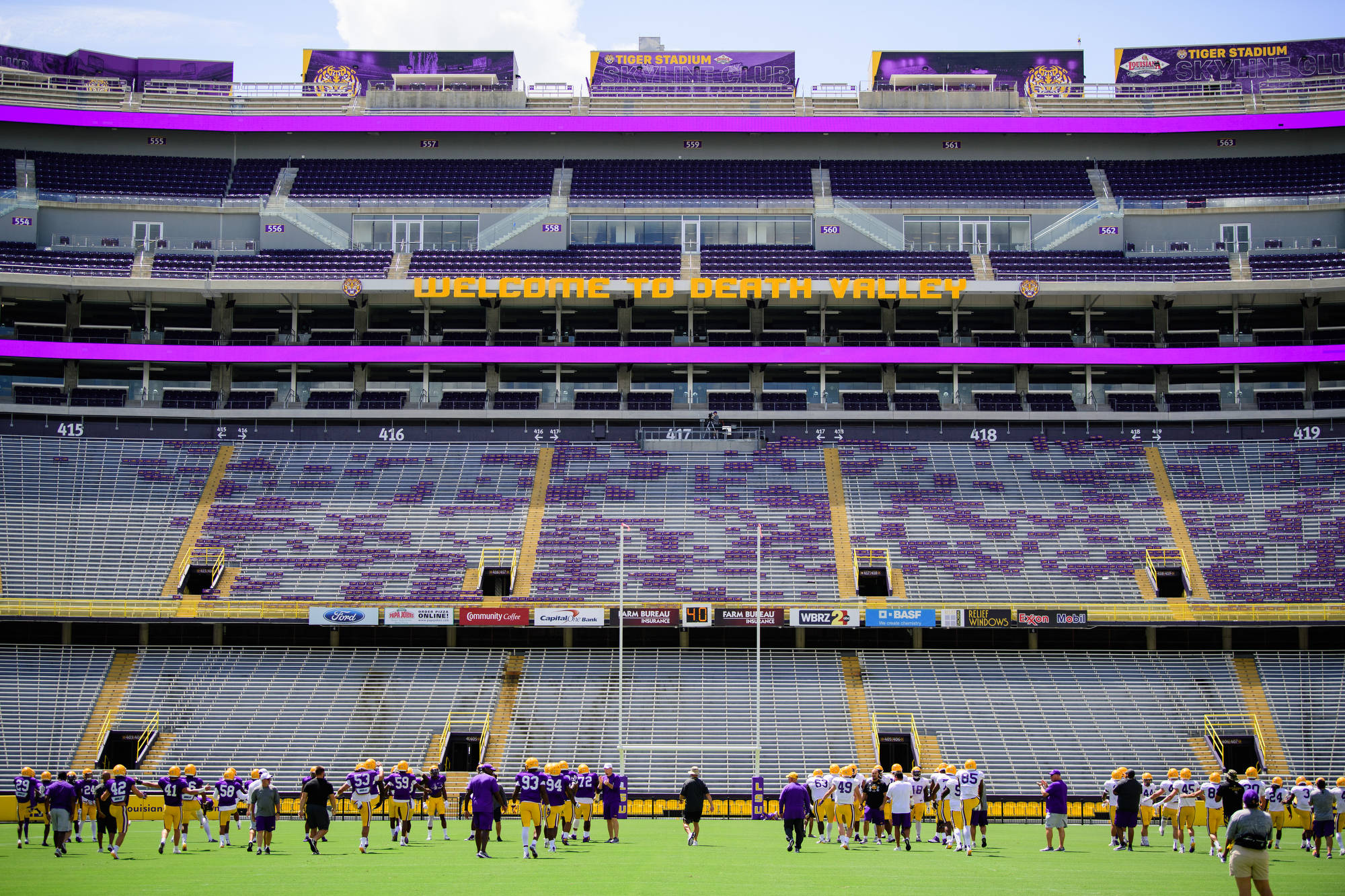 BATON ROUGE – LSU made big plays on both sides of the ball on Saturday as the Tigers held their first preseason game of training camp here Saturday in Tiger Stadium.

Saturday’s scrimmage – which focused on situations, including redzone, third-down and first-down – capped the first full week of camp for the Fighting Tigers. LSU also spent time working on different areas of special teams, which included punting and field goals.

“We had a great scrimmage,” LSU coach Ed Orgeron said. “Our players and coaches did a great job with preparation. There was a lot of energy on the field.

“There was a lot of work put in to the preparation, the game planning, and the substitutions. We had a lot of special teams work. We had an outstanding week of practice and I thought our guys finished on a great note.”

Always great to be back in Tiger Stadium pic.twitter.com/mBzAdfbSZd

Sophomore quarterback Myles Brennan, who played in place of Joe Burrow with the 1s, completed 8-of-13 passes for 158 yards and a touchdown. Junior running back Clyde Edwards-Helaire led the Tigers in rushing with 47 yards on 13 carries, while redshirt freshman Chris Curry added 12 yards on the ground.

Orgeron said Burrow was held out of Saturday’s scrimmage as a precaution and is expected to return to practice next week.

“He walked up there with some confidence. He started off under a lot of pressure, but he came back with two tremendous drives and made some great throws. He still has a ways to go, but I think he is much improved over last year.”

Ja’Marr Chase led all receiver with three receptions for 101 yards, including a 56-yard TD from Brennan. Stephen Sullivan added a pair of receptions for 48 yards, while Tyrion Davis-Price, Lanard Fournette and Derrick Dillon each caught two passes.

Defensively, linebacker Damone Clark paced the Fighting Tigers with five tackles, including a sack. In all, the Tiger defense recorded five sacks. Defensive lineman Breiden Fehoko scooped up a fumble and returned it 40 yards for another defensive highlight.

Orgeron said he was pleased with the overall performance of the defensive line, including the play of Fehoko and Tyler Shelvin.

On special teams, true freshman kicker Cade York connected on 8-of-10 field goals, including a 51-yarder in what was his first scrimmage in Tiger Stadium.

“The defense started off with the upper hand,” Orgeron said. “The offense came on and made some big plays. It was a seesaw battle.

“Overall I thought it was a good day on both sides of the football and on special teams. We still have a lot of work to do.”

Saturday’s workout was the first of three preseason games for the Fighting Tigers as LSU is scheduled for scrimmages in Tiger Stadium on August 17 and 24. LSU will take tomorrow off from football-related activities and then return to practice on Monday.