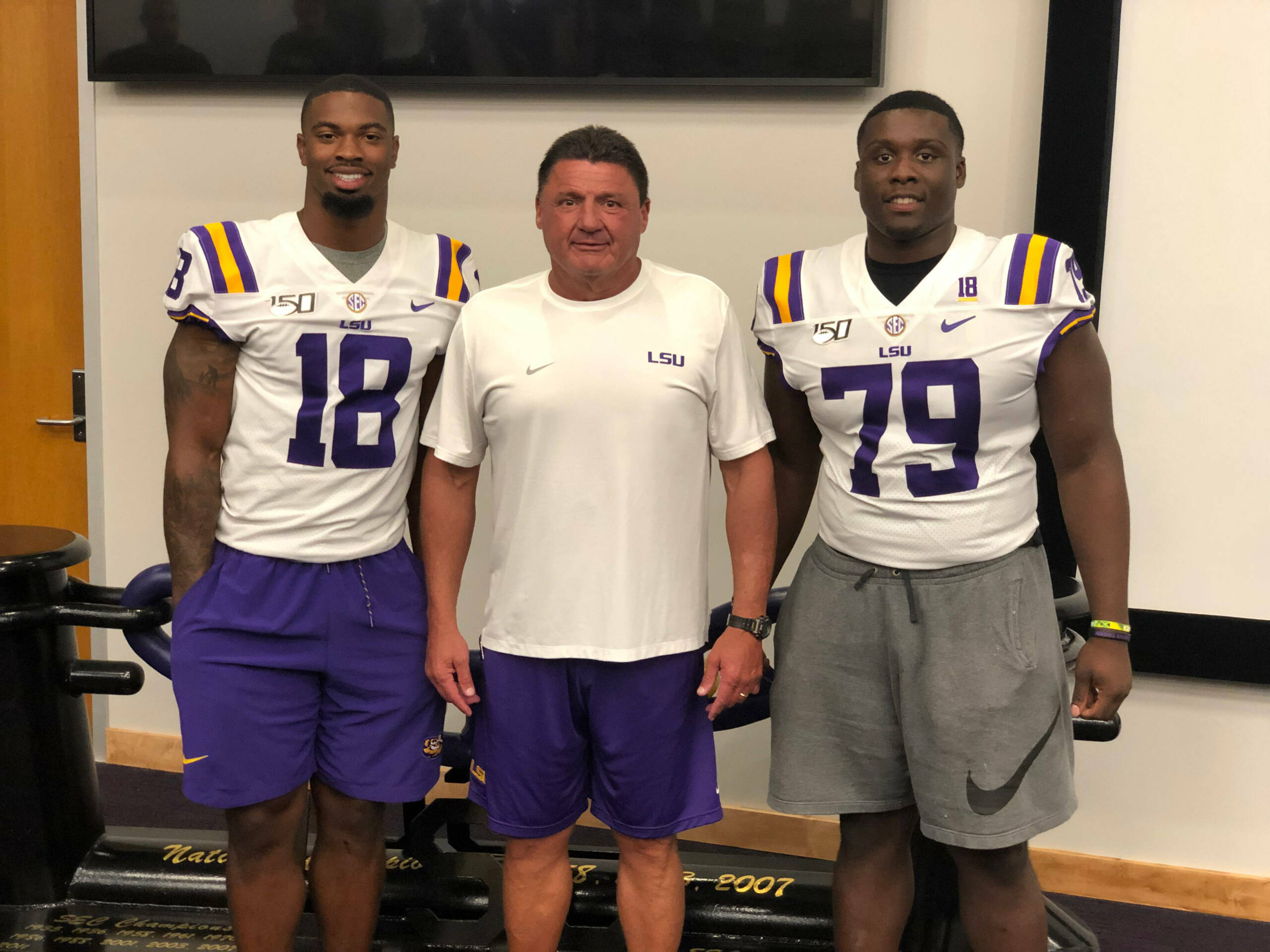 BATON ROUGE – Two LSU standouts – both in the classroom and on the football field – have been awarded the No. 18 jersey as head coach Ed Orgeron presented center Lloyd Cushenberry III and outside linebacker K’Lavon Chaisson with the prestigious number on Thursday night.

Cushenberry, a junior from Dutchtown High School in Carville, becomes the first offensive lineman to wear No. 18. Chaisson is a redshirt sophomore from North Shore High School in Houston.

Both players were presented their new number at a team meeting that wrapped up LSU’s first day of training camp.

As an offensive lineman, the rules of college football prevent Cushenberry from actually wearing the No. 18 jersey so instead his No. 79 jersey will be accompanied by a No. 18 patch. Chaisson, who wore No. 4 a year ago, will wear No. 18 on the field.

It’s the second time since the tradition started back in 2003 that two Tigers have been issued the No. 18 jersey in the same season. Tight end John David Moore and current LSU graduate assistant Christian LaCouture both wore No. 18 in 2017.

LSU’s jersey No. 18 tradition was born in 2003 when quarterback Matt Mauck led the Tigers to their first national title in football since 1958. Mauck’s No. 18 became synonymous with success – both on and off the field – as well as a selfless attitude that has become the epitome of being an LSU football player.

After his final season at LSU, Mauck passed the No. 18 jersey down to running back Jacob Hester, who later led the Tigers to another national title in 2007.

Cushenberry and Chaisson join an impressive list of LSU standouts to wear No. 18, including tight end Foster Moreau, who donned the jersey in 2018. Moreau was drafted in the fourth round of the 2019 NFL Draft and graduated from LSU in December of last year with a degree in sports administration.

Here’s a complete list of the former players to wear No. 18

The prestigious No. 18 tradition continues with Lloyd Cushenberry III and K’Lavon Chaisson! pic.twitter.com/2jG6y7xhg0

It’s an honor to be rewarded to Number 18 in this program. A way to recognize true leadership on and off the field. Thank you @LSUfootball and others that selected @LCush79 and myself to represent. I can assure you it is in the right hands. #GeauxTigers