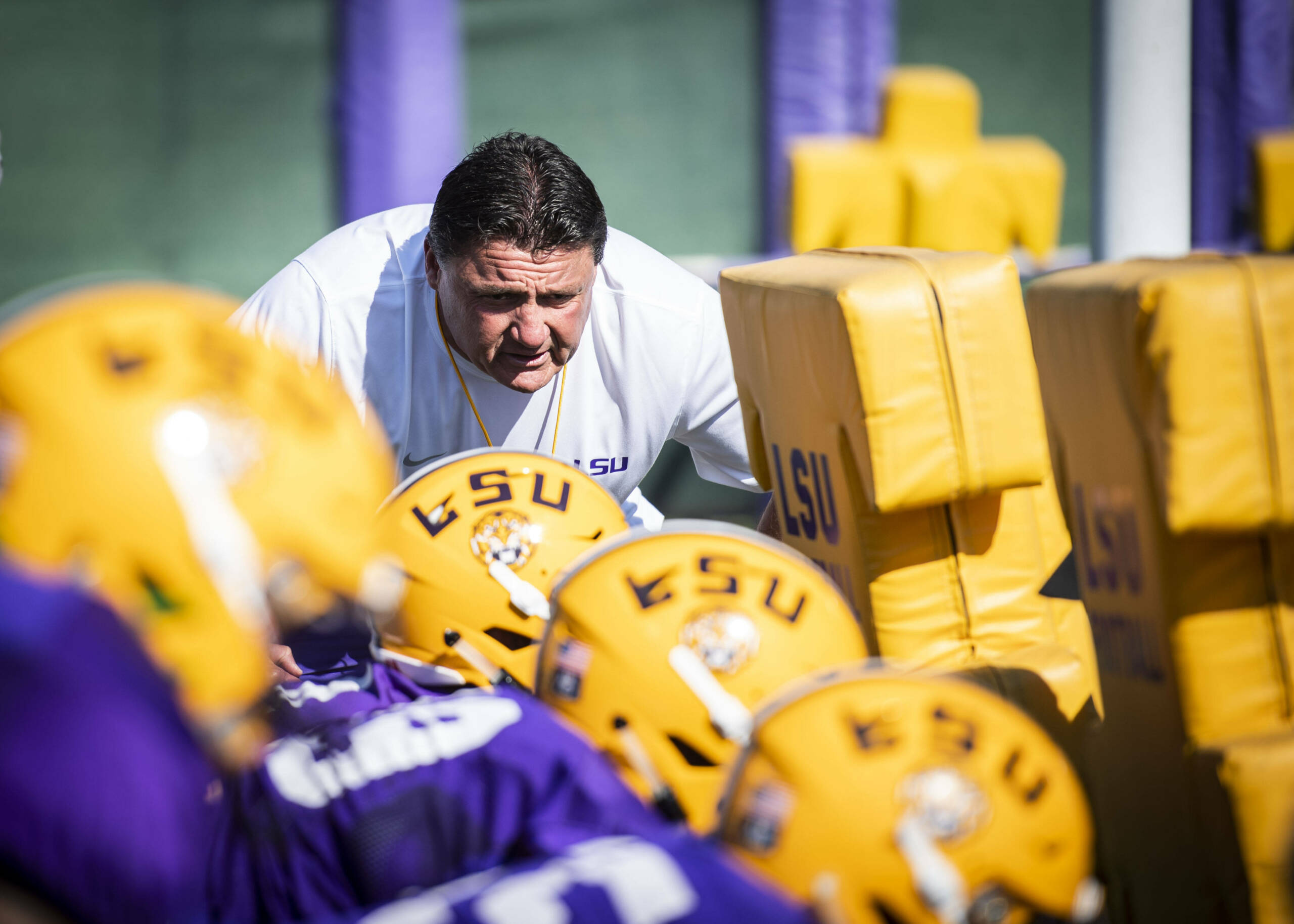 On Thursday, LSU’s players and coaches report for the start of fall camp.

Coaches will move in to their new office, players will size up for equipment and gear, and media and fans will start talking about football season – if they ever stopped in the first place.

Before Friday’s season-opening practice and Thursday’s media session with Coach O, here are a few story lines to monitor as the preparation for the season-opening kickoff against Georgia Southern begins in full.

Few programs are of LSU’s caliber.

Devin White and Greedy Williams are gone, and they leave massive holes to fill. Consider this: White was the first LSU defender to make contact on 95 plays last season. The next closest: Jacob Phillips at 59.

Williams, meanwhile, posted a team-high 10 pass break ups in 2018 and picked off eight passes in his two seasons of play. (He also had the perfect nickname for a cornerback. Seriously.)

That kind of production and impact isn’t replicable in a like-for-like sense, not to mention the leadership voids to fill, but the Tigers have some excellent candidates.

Michael Divinity Jr. slides from outside linebacker – where he was the team’s leading pressure-generator at 45 hurries, hits, and sacks in 2018 – to the inside, and he’ll be a versatile leader there.

Phillips and Patrick Queen have played important snaps and will duel it out and rotate next to Divinity. Queen was a sure a tackler as any Tiger last year (9.3 tackles per missed tackle, higher even than White’s excellent figure of 8.1), while Phillips was rock solid next to White last season.

In Greedy’s stead, Kristian Fulton returns as one of the best corners in the country. Last season, he held passers below 40% completion and a 51.9 NFL passer rating when targeted. Next to him, freshman Derek Stingley Jr. has all the makings of a superstar, entering as the No. 1 player in the country per Rivals.com

We saw a taste of it in the spring, but everyone is hungry for more of LSU’s new-look offense under offensive coordinator Steve Ensminger in year two and passing game coordinator/receivers coach Joe Brady.

More spread, RPOs, and quarterback runs. A veteran quarterback in Joe Burrow who was as good as any player in the country over the final four weeks of the season. A pass-catching running back in Clyde Edwards-Helaire and a proven No. 1 receiver in Justin Jefferson.

There’s a lot to like about the potential of this unit, but the fall fun will be in seeing how it operates schematically.

Plenty of spots will be up for grabs this fall. No one’s job is guaranteed, of course, but certain position battles will draw most of the focus.

Left guard is a key spot to watch after the departure of Garrett Brumfield. Orgeron has mentioned the likes of Adrian Magee, Chasen Hines, and Kardell Thomas as candidates.

The pecking order at receiver should be fun to watch unfold. Jefferson is a proven commodity, and Terrace Marshall Jr. and Ja’Marr Chase are poised for sophomore break outs. But Dee Anderson and Derrick Dillon have made critical plays as veterans, and Orgeron has raved about true freshman Trey Palmer.

Stephen Sullivan‘s transition to tight end highlights a spot that’s wide open and hard to predict. The new offense might count on more pass-catching from the position, which Sullivan is perfect for. But Thaddeus Moss and TK McLendon each bring their own skillsets to the position, too.

Ensminger talked this summer about running back by committee, and that committee is full of talent. Edwards-Helaire is proven, while true freshmen John Emery Jr. and Tyrion Davis-Price are talented. Throw in the versatile Lanard Fournette and the hard-running Chris Curry, and there are plenty of options to pick from. Don’t forget about fullback/H-back/tight-end/resident mad man Tory Carter, either.

On defense, Phillips and Queen will each get time next to Divinity, while finding ways to get Grant Delpit, JaCoby Stevens, Todd Harris Jr., and Kary Vincent Jr. all on the field together at once will keep Dave Aranda up at night – if he sleeps at all. Mannie Netherly‘s development at corner might be key in building depth in the secondary.

K’Lavon Chaisson‘s return to the edge gives LSU a legitimate double-digit sack threat, while Rashard Lawrence, Breiden Fehoko, and Glen Logan are all proven commodities in the trenches. Tyler Shelvin and Siaki Ika‘s race to start at nose tackle will bring out the best in both talented big men.

Everyone loves seeing freshmen and newcomers in the purple and gold for the first time.

Davis-Price and Emery will draw eyes in the backfield, as will quarterback Peter Parrish.

Palmer and Devonta Lee add talent to the receiver room, while Marcel Brooks could be the heir to Delpit and Stevens in the hybrid safety quarter role.

Two-sport standout Maurice Hampton Jr. will start his career at safety before playing baseball in the spring.

Don’t forget about Thomas up front and Stingley in the back.

And don’t forget about kicker, either. Cole Tracy‘s highly-accurate shoes will not be easy to fill. Cade York could very well be counted on to make some big kicks this season.