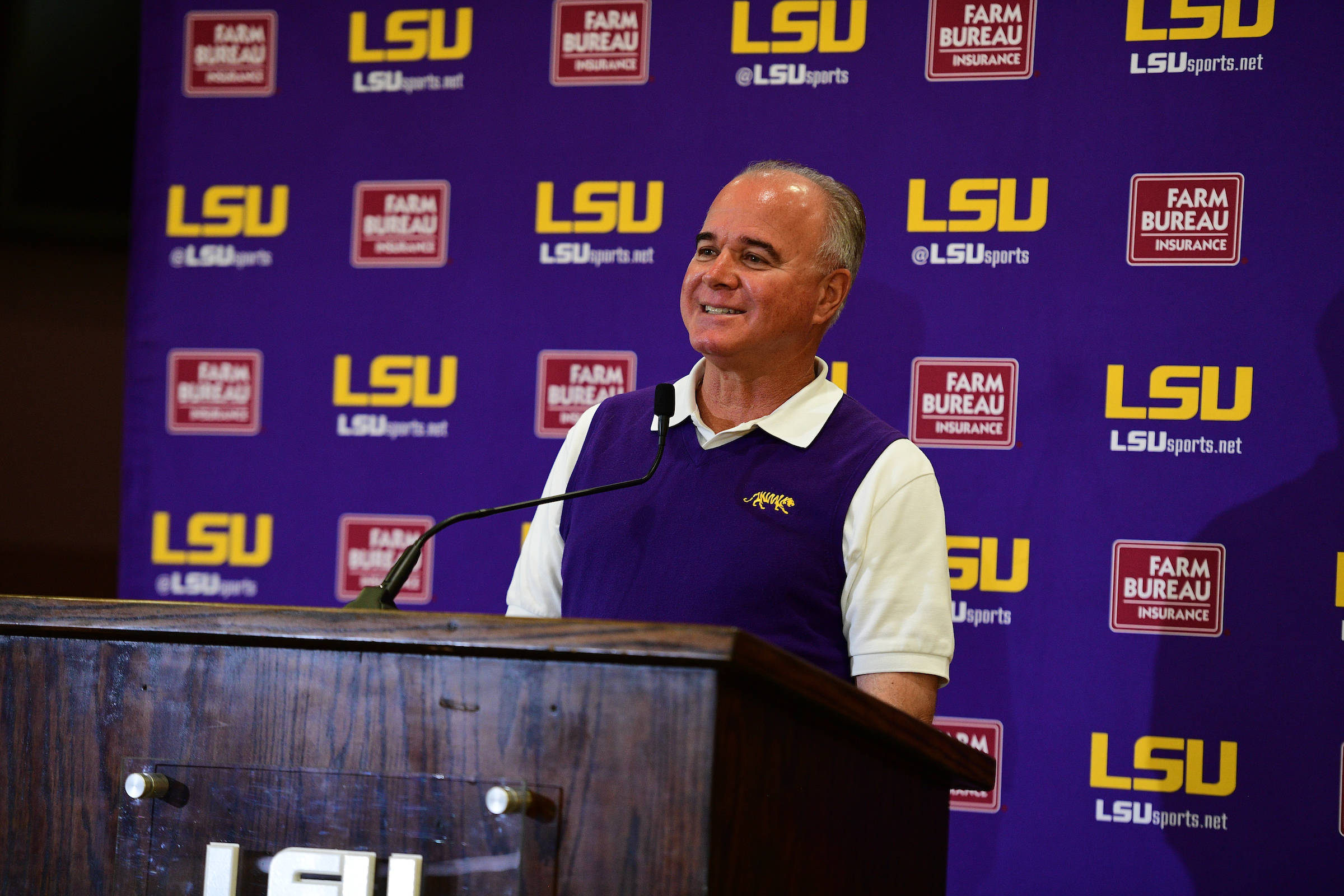 Below are some of Mainieri’s quotes excerpted from the event:

On the ending to last year’s season…
“Last year, the season ended a couple wins short of getting us back to Omaha. That’s always a disappointment to us at LSU if we can’t finish the job. In a lot of ways, I think we did some tremendous things considering the adversity we had to deal with. We had so many injuries to our pitching staff. We didn’t have what we thought would be our weekend rotation together for an entire weekend in the season. When you add Eric Walker with (Cole) Henry and (Landon) Marceaux, I think we only had that one time the entire year. It really was a struggle for us on the mound to keep guys out there and get some fluidity with our rotation. I thought we did a tremendous job overcoming adversity in a lot of areas.

“Certainly around here the goal every year is to get to Omaha and play for a national championship, and we came up a little short of that goal. Everybody asks ‘Well is next year going to be the year?’ Every year, we roll out of bed and believe that this will be our year, and 2020 is no exception. We certainly have a lot of areas to fill. We lost virtually a third of our everyday lineup. The three-headed monster of Josh Smith, Antoine Duplantis, and Zach Watson are going to be huge voids to fill. We also lost Chris Reid and Brandt Broussard, so really five everyday players in our everyday lineup. We lost Zack Hess and Todd Peterson, two major cogs on our pitching staff, so there’s certainly going to be some areas that we need to address and fill. But, I feel like we’ve done that with this recruiting class coming in.”

On the incoming recruiting class…
“We have 12 new players at this point, and may add a 13th player in the next couple of weeks. Right now, the 12 players coming in I think are significant players. You can tell by looking at the names that there’s much more emphasis on the position-player type of athlete compared to last year, where we brought in mostly pitchers.

“This year, I think our pitching depth is going to be good. I think we have great, young talent that once (LSU pitching coach) Alan (Dunn) gets out there and starts working with them and they can stay healthy, we have a good chance of having a very dominant pitching staff. We addressed the catching position, the infield where we added two new infielders, and we brought in some outfielders that I think are impact players as well.

“I feel we’re very fortunate to have (freshman infielder) Cade Doughty. I have the same feeling about him being here as I had about Alex Bregman or Aaron Nola, someone that you knew if they signed professionally, you wouldn’t blame them. They chose instead to come to LSU first, have the experience here for about three years, and hopefully that time here will prepare them to move even quicker through the minor league system and get to the big leagues. I’m really happy Cade had the faith in LSU and our baseball program and wants to have the experience here.

“We were able to sign two really good players this summer. These players became available because the schools they signed national letters of intent with decided to make coaching changes at the head coaching spot. Because of that, these players requested releases and they were granted. I’m talking about Zack Mathis, who is a junior college transfer from northern California, and Zach Arnold, a freshman infielder from Temecula, California. They’re both really good all-around ballplayers, and there’s no question they’ll give us greater depth, but also have a good chance to step in and be impact players for us right away. I’m very excited about the possibilities of our infield with (sophomore first baseman) Cade (Beloso) and these two additional players and also see what we have coming back. I think that could really be the strength of our team.

“I’m real excited about the two freshmen catchers that are coming in, Alex Milazzo from Zachary (La.) and Hayden Travinski from Airline High School in Shreveport (La.). I think between those two guys, combined with (junior catcher) Saul Garza, give us a really good catching core.

“I’m excited about (freshman LHP) Jacob Hasty. We scouted him and loved him. You hear people from the state of Texas say they thought he had the second-best breaking ball in any pitcher in the state of Texas. Jacob can run it up there at 92 miles an hour, has that outstanding breaking ball, and is a very intelligent kid. I think he can help us in a big way. Whether as a starter or reliever, we’re not 100% sure until we go through fall practice. Hopefully he’ll stay healthy and pitch great.”

On returning players’ performances in the summer collegiate leagues …
“(Sophomore first baseman) CJ Willis was killing it in the Northwoods League. He was hitting .362 until he dove to a bag trying to beat a base runner and reinjured his right shoulder, so we had to bring him home, where he’s currently rehabbing his shoulder. He showed that he has the capabilities of really stepping it up and having a great impact on our team next year.

“I’m really happy about the way (sophomore RHP) Rye Gunter threw this summer. He had some good outings and has a good fastball. He’s going to throw the ball close to the mid-90s and if we can just get that command and off-speed pitches a little better, I think Rye can be a guy that can end up helping us a lot next year. Some very good things happened this summer, and I’m excited about it.”

On returning pitchers’ recoveries through the summer…
“I believe a few of the guys start their throwing program next week, talking about (sophomore RHP) Cole (Henry) and (sophomore RHP) Landon (Marceaux). I know Landon talked to our strength and conditioning coach, and I believe he is coming in today or tomorrow to start working out again and starting to throw. But we shut Cole Henry down, we shut Marceaux down, we shut (junior RHP) Devin Fontenot and (junior RHP) Trent Vietmeier and all the rest of the guys down for the summer. All the reports from them right now is that they’re feeling great.

“I will tell you that (sophomore RHP) Jaden Hill looks good. He has been here all summer in the weight room and he has developed his body into a man. He is about 225 right now and looks great, and we’re hoping that all that additional strength will give his elbow good stability and he’ll be ready to go. (Sophomore RHP) AJ Labas has been here all summer going to school and rehabbing and he is throwing. We are excited about having him back as well.”

On new hitting coach Eddie Smith…
Eddie Smith is someone that I’ve known now for about 15 or 16 years. I had the privilege of having him in the baseball program for two years at Notre Dame, and I can tell you that he was that guy that would do anything for the team. He was a super utility infielder for us, and you could tell that while he was there that he was more than just a student, more than just an athlete; that he had a desire to someday go into coaching.

I did some careful analysis of our program after last season ended, and I just felt that we needed to get a person of experience, of proven record, somebody that really had a game plan of how to develop hitters and when I sat down with Eddie to talk about it, I was really mesmerized by his organization, his plan, his drills that he does and the purpose of the drill along with the success that they’ve had, and I just felt like we were on the same page when it comes to hitting and offensive baseball. He is going to be a great addition to our staff and with him working with our guys, I think they are going to benefit from it and do tremendous job. I think that Eddie will do a great job bringing the potential out of our guys.”

On working with Director of Athletics Scott Woodward…
“Scott Woodward in my opinion is the best Athletic Director in the country. The visits I’ve had with him and his staff makes you really excited about the future of LSU Athletics. He wants to win and win championships, but he wants to do it the right way. I’m all about integrity and doing things the right way and representing a great university, the greatest university in the world, and that is something that Scott and I have in common. He wants excellence, he wants greatness, he wants to do it the right way and represent LSU the way it’s supposed to be represented.

“I think his expectations are going to be high. He is going to hold me accountable as well as our coaching staff. He is going to expect a good return for what they’re providing for us, but that is what you want. You want to be given the tools for success and then have people expect you to be successful. LSU is all about excellence in everything we do on both sides of Nicholson Drive, so we’re all in this together. This is a wonderful place to work and everyone that comes to work here every day should be highly motivated to give their very best effort.”