"It's a Game-Changer" | Tigers Wowed by New Locker Room 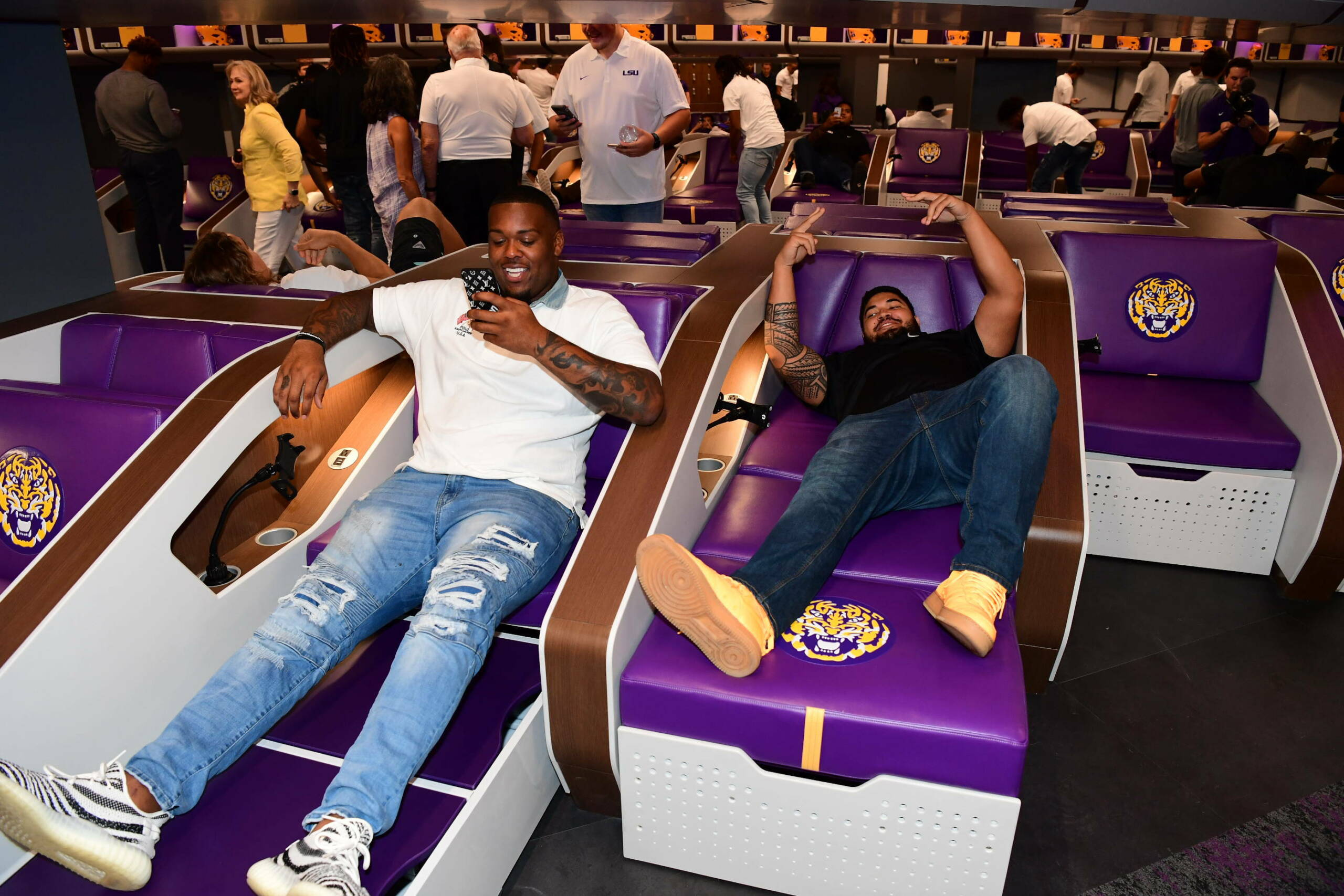 Kary Vincent was standing in his locker, shouting. Grant Delpit was lying supine in his, grinning.

“One more year!” Vincent yelled, first to Delpit, then to anyone nearby, though it’s unlikely very many heard over the celebratory whooping. “Everybody at LSU is staying all four years now! Maybe even five or six! Nobody’s leaving!”

Welcome to the brand new LSU Football locker room, unlike any other in the country. It’s the heart of a newly-renovated Football Operations Facility that achieves exactly what Vincent was suggesting, and what junior JaCoby Stevens put most succinctly a few minutes later.

“There’s no point in going home,” Stevens said. “Why would I need to leave? I got everything I need right here.”

Unveiled to the players for the first time Sunday night, the Phillips-Bordelon Locker Room – one part of the larger renovation to the entire facility – is the first of its kind anywhere in the world.

Imagine a cross between first class cabin on an airplane and a space station from a science fiction film. Featuring custom-manufactured, open, two-part lockers, the room combines state-of-the-art design with practical functionality, engineered with one goal in mind: to provide an all-needs-met, time-efficient space for the Tigers to prepare, rest, and recover – as a team, and as individuals.

“We walked in, and you know how you walk in on those charter flights we take?” Breiden Fehoko said. “That’s literally the first thing that came to mind. You’re in first class. You walk in here, you don’t even think it’s a locker room. You just feel comfortable.

“This is a game-changer.”

Walk in, and the first thing that stands out is how open the locker room is. There are no closed-off rows boxed into walls.

Instead, the new locker room, designed by Kansas City-based firm HNTB, has wall-to-wall, corner-to-corner line of sight, something that LSU’s principals wanted for both aesthetic and functional purposes.

Yes, it looks phenomenal, but it also maintains connectedness between players, who are no longer separated boxed-in lockers and, instead, are visually connected across the entire room.

This is why you come to LSU pic.twitter.com/qoDcoguQ2y

“It’s unprecedented in a locker room of this size to be able to see from one side of it to the other,” says Greg Stringfellow, LSU’s Director of Equipment. “It’s probably one of the cooler things about it.”

Within that open concept, LSU’s stakeholders also wanted to ensure some privacy and seclusion for players, too.

The program has done proprietary research into rest and recovery. Prior to renovations, athletes in need of a nap would grab a spot on the floor or occupy valuable space on a training table for quick snoozes.

And while other programs have built special sleeping rooms for that purpose, LSU wanted to make sure each player had his own space to sleep or recover, whenever he needed it.

Fehoko’s intuition was spot on. The lockers were inspired by a first class airplane pod, and the goal was to combine openness on a macroscale and seclusion on a microscale.

“They can also watch film, they can get hydrated, and they can have the NormaTec recovery boots. So this is where we kind of brainstormed and put together an idea.”

Or, as Justin Jefferson said: “I’ve got a bed. In my locker. My locker is a bed. Who else has a bed in their locker?”

I’m truly at a special place

His teammates. And nobody else.

THE LOCKER OF THE FUTURE

The execution of the concept is unprecedented and brilliant to behold.

The individual locker itself is two parts. The upper portion includes digitally locked storage, charging ports for personal electronics and helmets, and custom, magnetic name plates for each player.  The lower portion is loaded with features: a seat that folds out into that bed for napping or laying out with a NormaTec recovery boot; an iPad dock for watching film or consuming non-football content; more charging ports; and a custom-fit cup-holder for hydration.

Each portion connects to its own ventilation – the upper ventilates through the roof, while the lower ventilates through the floor, keeping both spaces clean and sanitary. (A mudroom with shoulder pad racks and shoe dryers separates the locker room from the practice field, offering an additional layer of sanitary protection. It also uses its own ventilation and air conditioning.)

And in between top and bottom: wide open space.

The idea is to create a space where, as Stevens recognized, the athlete never has to leave. No more need to drive back to the apartment for quick meals or a power nap. Every need the player has when away from the field can be met, and it’s all in one building.

“The locker room, it goes without saying, I think it’s absolutely one of a kind,” says Shelly Mullenix, LSU’s Senior Associate Athletic Director for Health and Wellness. “This is where they live, this is where they spend most of the time. We want them to be comfortable here. And having a place like the locker room where they can actually put on their NormaTecs, put on their headsets, watch film in their own little cubbyhole, where they could actually be comfortable is just a tremendous asset, because you do waste time going back and forth. And we really want it to be as easy as it can be for them.”

It’s also a place they can unplug, too, Mullenix says. Camp hours are long and grueling, and there are serious benefits to getting away from football, metaphorically, without getting away from the facility in a literal sense.

“Having that space for them to be able to turn everything off is unique,” she says. “You really don’t turn off when you’re in the football facility. When you’re here, you’re supposed to be on. But we recognize that’s actually not a good thing. We need to have more time where they’re actually out of their head, out of football and more into themselves. And that’s what the locker room brings to them.”

Future applications are limitless. Marucci foresees locker rooms like this popping up everywhere. They’re ideal for baseball clubhouses, he says, but he also imagines doctors and surgeons utilizing similar spaces in hospitals across the country.

“This was LSU being the industry leader and coming up with something that’s pretty dynamic and pretty exclusive right now,” he says. “There’s nothing else like it, anywhere.”

PAST, PRESENT, AND FUTURE TIGERS

Also inside the locker room is a space dedicated to former Tigers still playing professionally, while outside the locker room is an NFL corridor honoring former Tigers. Blank jerseys are mounted on the walls across from mapping projectors, which use the jersey as a display that flashes back and forth between the athlete’s LSU uniform, his professional uniform, and highlights of his play at both levels.

“We’re celebrating our NFL players with the mapping projectors on those jerseys in the back hallway,” says Doug Aucoin, LSU’s director of video. “Some of that stuff is for recruiting. But it’s also celebrating our current players and our past players’ accomplishments.

“That’s what it’s all driven by: player comfort. Current players, previous players and future players. It’s all about the players’ experience.”

On Sunday, the players’ experienced it all for the first time. They raced to tour the entire building, joking they’d need a map or else find themselves late for team meetings come fall camp.

Several stretched out in their lockers and joked that they were going to run home and grab sheets to spend the night.

“We spend time driving to the cafeteria, driving to the apartments,” Fehoko said. “I guarantee a lot of guys are just gonna spend their night here. It’s like no brainer. You’ve got your own bed. You’ve got chargers here. You can plug in stuff. This is a game-changer, right here.

“You’ll pull in at least four or five more five-star, top-tier athletes a year, just because of this.”

And if Vincent’s right, maybe a few more guys stick around for an extra year or two. Even those that do go to the NFL – there’s a bunch of those, these days – are sure to come back.

It’s home. Everything they need is right here.