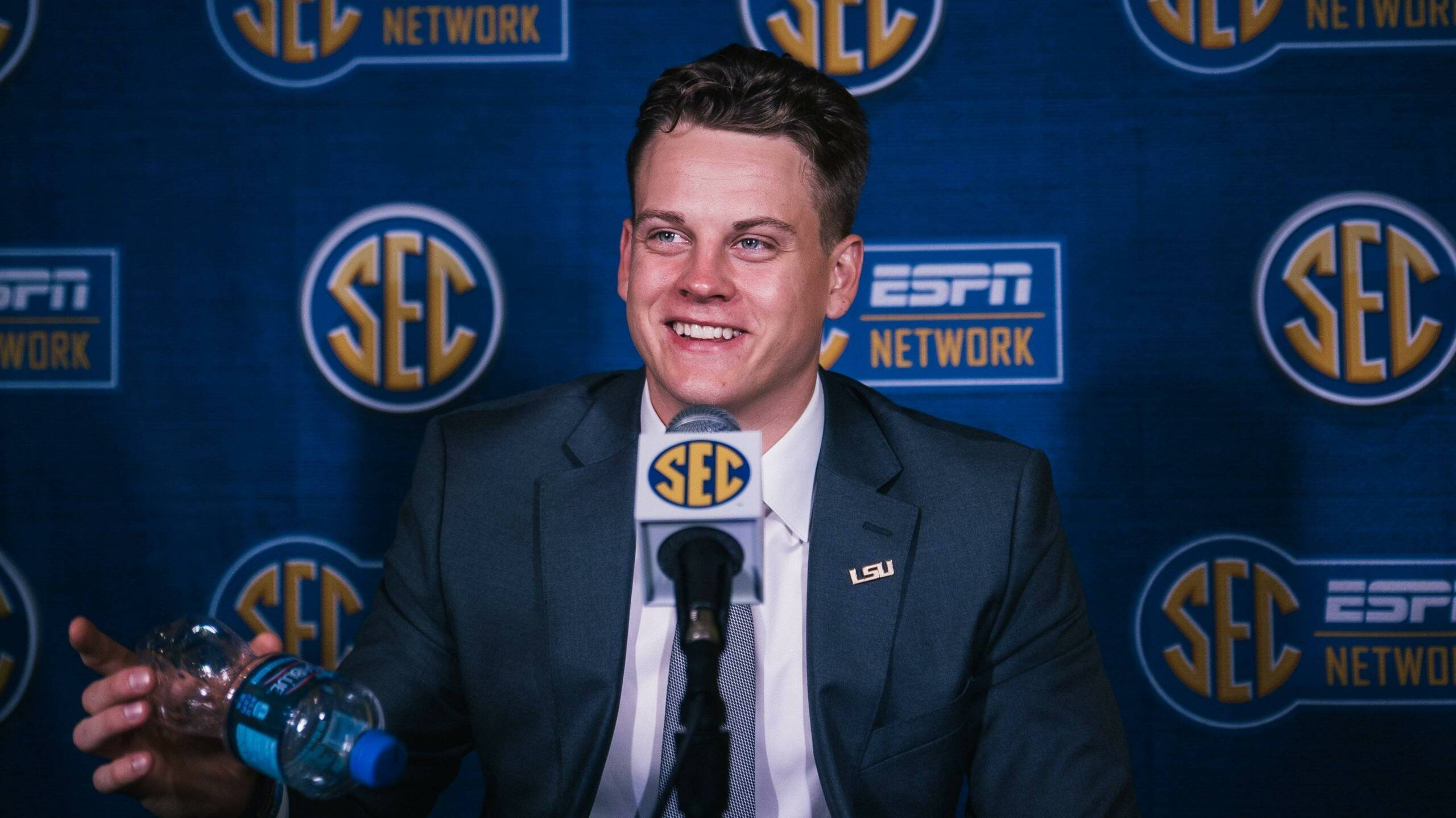 On Monday, Ed Orgeron, Joe Burrow, Grant Delpit, and Lloyd Cushenberry boarded a plane for Alabama to take part in the 2019 SEC Football Kickoff. For a few hours, each spoke at length about the season ahead, the state of the LSU football program, and, at one point, relativity and black holes.

The Tigers’ annual trip to Hoover is also equal parts informative and interesting. Here are a few talking points they touched on throughout the day.

Orgeron’s been around a lot of talented defensive secondaries, between his days at USC and now at DBU.

None have been quite so talented as the 2019 unit in the Tigers’ defensive backfield.

“I think this is the best group of defensive backs I’ve ever coached,” Orgeron said. “That’s 35 years of coaching.”

It’s the collection of talent that catches Coach O’s eye. Led by Unanimous All-American safety Grant Delpit and preseason Bednarik Watch List cornerback Kristian Fulton, the Tigers are loaded at every spot in the secondary. That includes former five-star safety and late 2018 breakout star JaCoby Stevens, as well as freshman Derek Stingley, the No. 1 recruit in the class of 2019.

“I’ve been around some singular guys that may have been as good or better, but I think collectively – you look at Grant Delpit; you look at Kristian Fulton, who’s the top rated cornerback coming back in the league; you look at Derek Stingley,  who was the number one player in the country. Derek could’ve started – he came and practiced with us for a week — he could’ve started for us in the bowl, he’s that good; and then you look at JaCoby Stevens, who was a five star out of Tennessee, a tremendous football player,” Orgeron siad.

“You look at Todd Harris. Look at Marcel Brooks. Backing those guys up, you’ve got Cordale Flott, you’ve got Jay Ward, you’ve got Kelvin Joseph. I mean, we just have a lot of depth at that position. And those guys know how to play. And they’re well coached by Bill Busch and Corey Raymond. I think that those guys are going to be a force for this year.”

It starts with Delpit, though, who will wear the playmaker’s No. 7 jersey this year for the Tigers after sharing No. 9 with Burrow last year. Orgeron called him “the best defensive player in the country coming back this year,” and Burrow said “he’s going to make a lot of money playing football.”

Delpit, meanwhile, is taking it all in stride.

.@showtime9_ breaks down the summer and what to expect in the fall#GeauxTigers pic.twitter.com/mYfz5QAsr0

“Man Joe was wearing 9 so good, I just had to switch numbers,” Delpit joked. “It’s definitely a blessing for the coaching staff to choose me to uphold that tradition of being No. 7. Just the guys that’s worn it before me, it definitely speaks for itself, so I don’t have to really talk a lot about that. Just let my play do the talking.”

As strong as the secondary looks, the Tigers have as much optimism on the offensive side of the ball as there’s been in a decade. Nine starters, including Burrow under center, are back to run a new-look, spread offense with a heavier dose of quick routes, run-pass options (RPOs), and quarterback runs.

It’s a style that suits Burrow. The Ohio State transfer is used to more spread looks and has quickly adapted to the scheme.

“This is a system that Joe’s used to,” Orgeron said. “So he fits into it. The quarterback runs, the checks at the line of scrimmage, this is the stuff that he ran at Ohio State, so he was very, very quick to learn it. Loved it. I think he’s gonna do well.”

The new offense is fun, but it’s the familiar faces that gives Burrow the most confidence. After throwing for 2,894 yards and 16 touchdowns in 2018, he’s ready to build on that success thanks to increased continuity of personnel.

Asked why he was so confident the Tigers could score “40, 50, or 60 points” per game this year, Burrow made that point clear.

“The main thing is we have everybody back,” he said. “And we only lost two guys that really played a lot for us on offense last year. So the experience coming back is the main thing. And there’s some new concepts that we have that I’m really excited about.”

The doubters, the critics, the pundits who worry that LSU’s line can’t protect Burrow enough to make the shiny new offense hum.

Orgeron tells his team to block out the noise, but sometimes, they’ll use the noise for blocking fuel, first.

“We understand it,” said Cushenberry, one of the highest-rated centers in the country a season ago, “that we have to be better. And we look forward to the challenge this year.”

What gives Cushenberry confidence is the talent around him on the offensive line. From left to right, Sahdiiq Charles, Chasen Hines, Damien Lewis, and Austin Deculus all got plenty of reps a season ago, as did veteran Adrian Magee. Add in freshman Kardell Thomas, who is in the mix to start at left guard, and Cushenberry likes the personnel around him.

Cushenberry reserved his best praise for Lewis, who started all season for LSU at right guard last year and formed a formidable tandem with him in pass protection and inside runs.

“We’ve got Damian Lewis coming back, who’s probably the best guard in the country, in my opinion,” Cushenberry said. “He’s a guy that does his job every single play, and doesn’t get a lot of credit, but that’s just the position that we play. He keeps his mouth shut and does his job.”

Orgeron is known for his affinity for coaching defensive linemen, and he’s ratcheting up his approach with the big boys in the trenches this season.

With more depth at defensive tackle and returning talent on the edges, his plan is to let the line loose in 2019, with a more aggressive approach in the trenches than in years past.

“I’m going to be a lot more loud on the defensive line as coach than I’ve ever been,” Orgeron said. “That’s something I know we can do well. We’ll go back and attack as a defensive line.”

Breiden Fehoko and Rashard Lawrence are both back, offering versatility as tackles in a four-man front or ends in a three-man front. And Tyler Shelvin and Apu Ika give Orgeron two fierce nose guards who can shade to either side and get into the backfield.

Shelvin “is down to a slim 340 now,” Orgeron said, 40 pounds lighter than his arrival weight at LSU. Ika, a true freshman, is battling Shelvin for a starting role as well, having ascended to the first team in the spring.

Whoever gets the nod, expect them to end up in the backfield more often in 2019.

“We’ll enable these guys,” Orgeron said. “We are going to make some slight adjustments on how we play with the guys, but it will be more of a freestyle attack, getting back field making plays. I think you’ll see that with those guys.”

It wouldn’t be media days without a strange quote or two.

Burrow was happy to deliver a few, freelancing on topics from Louisiana and Ohio culinary comparisons to binge-watching Netflix’s Stranger Things this summer.

And when Hurricane Barry caused his Internet to go out, he turned to YouTube videos on his phone.