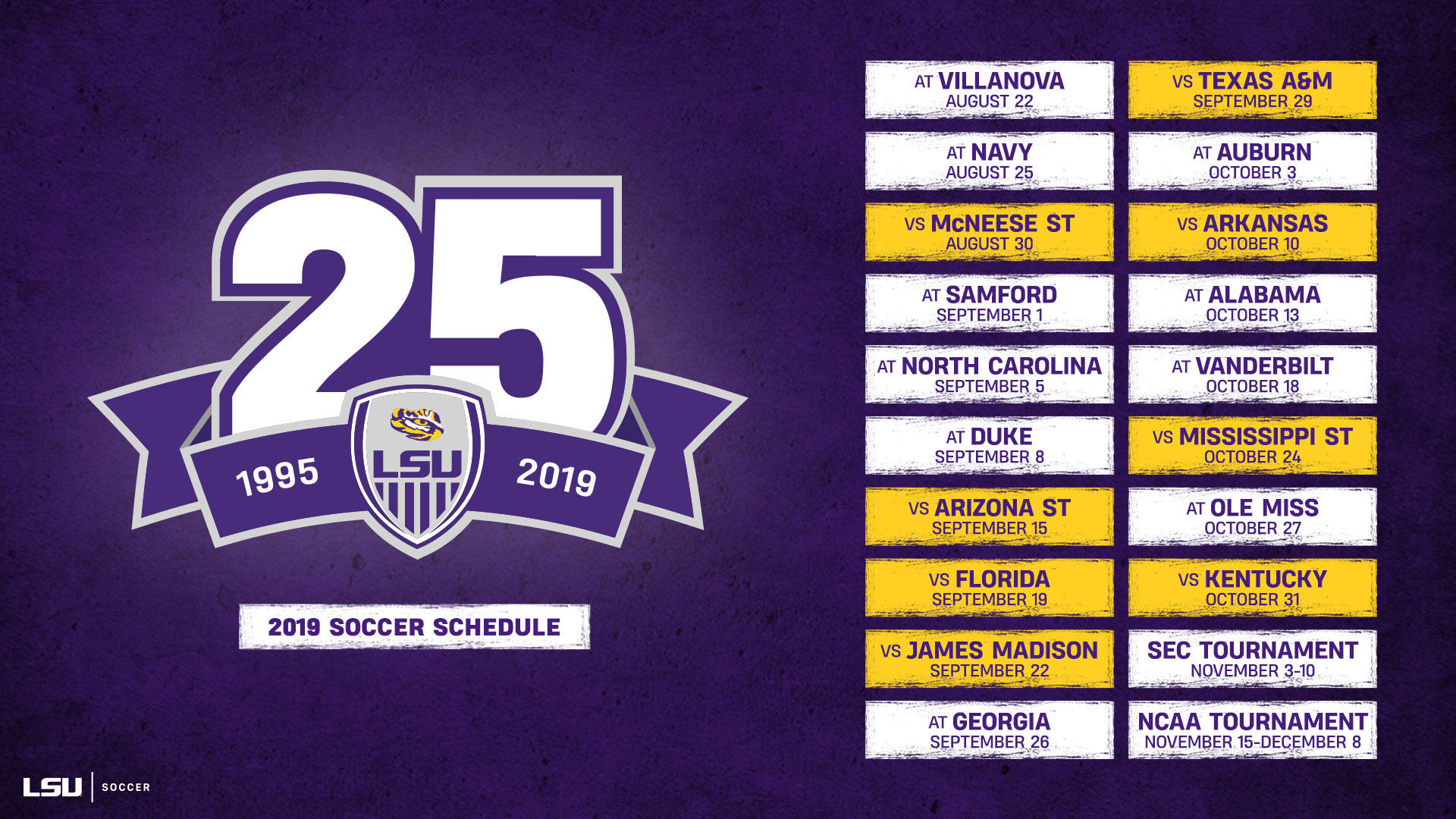 Baton Rouge, La. – The 2019 schedule for the LSU soccer team has officially been released and will feature a total of 18 regular season matches, eight of which will be played in Baton Rouge at the LSU Soccer Stadium.

The Tigers, the reigning 2018 SEC Tournament champions, will be under the direction of interim head coach Debbie Hensley. The 2019 schedule for LSU is considered one of the toughest in the nation with nearly half of the matches (8 out of 18) against NCAA Tournament teams from a year ago. The 2019 season will serve as the 25th year of LSU soccer dating back to 1995.

The 2019 squad will report to Baton Rouge on Aug. 5 to prepare for two exhibition matches that will take place at LSU Soccer Stadium. Fans can come get a glimpse of the 2019 team as they host Southern Miss (Aug. 9/7 p.m.) and Southern Methodist University (Aug. 15/8 p.m.) at LSU Soccer Stadium for friendlies prior to the start of the regular season.

The 2019 campaign will officially get underway with a road trip up north with away matches against Villanova on Aug. 22 and Navy (Aug. 25). The home opener for the Purple and Gold will take place on Aug. 30 as the Tigers welcome McNeese State to LSU Soccer Stadium for a match at 7 p.m.

Five of LSU’s first six matches will be on the road with a three-match road swing following the home opener. LSU will take on Samford (Sept. 1) in Birmingham, Ala., to open up the month of September. Following that contest the Tigers will head to the 2019 Duke Nike Classic to take on two NCAA tournament teams from 2018. The first match of the Duke Classic will be against 2018 national runner-up North Carolina on Sept. 5. The Tigers will then have a two-day break to prepare for a Duke (Sept. 8) squad that made it to the third round of the 2018 NCAA Tournament.

Following the trip to North Carolina the Tigers will head home for a three-game homestand that will take place from Sept. 15-22. LSU will host the Sun Devils of Arizona State on Sept. 15 with a duel at 12 p.m. The SEC opener will take place on Sept. 19 against Florida at LSU Soccer Stadium with first kick set for 7 p.m. The three-match homestand will see LSU close out the non-conference portion of the schedule with a game against James Madison University on Sept. 22 at 1 p.m. The month of September will end with SEC matches at Georgia on Sept. 26 and a home match against Texas A&M on Sept. 29 at 1 p.m.

A road match against Auburn will open the month of October on the third day of the month. LSU will then welcome Arkansas on Oct. 10 for a match at 6 p.m. before hitting a two-game road trip. The Tigers will take on Alabama in Tuscaloosa on Oct. 13 and will then head to the Music City for a showdown against 2018 SEC regular season champions, Vanderbilt, on Oct. 18. The regular season will come to a close with a pair of home contests sandwiched around an away match. Mississippi State (Oct. 24/7 p.m.) and Kentucky (Oct. 31/7 p.m.) will make the trip to Baton Rouge and LSU’s last road match of the season with be on Oct. 27 at Ole Miss.

The SEC Tournament will begin on Nov. 3 in Orange Beach, Ala., and the first round of the NCAA Tournament is slated for the weekend of Nov. 15-17.