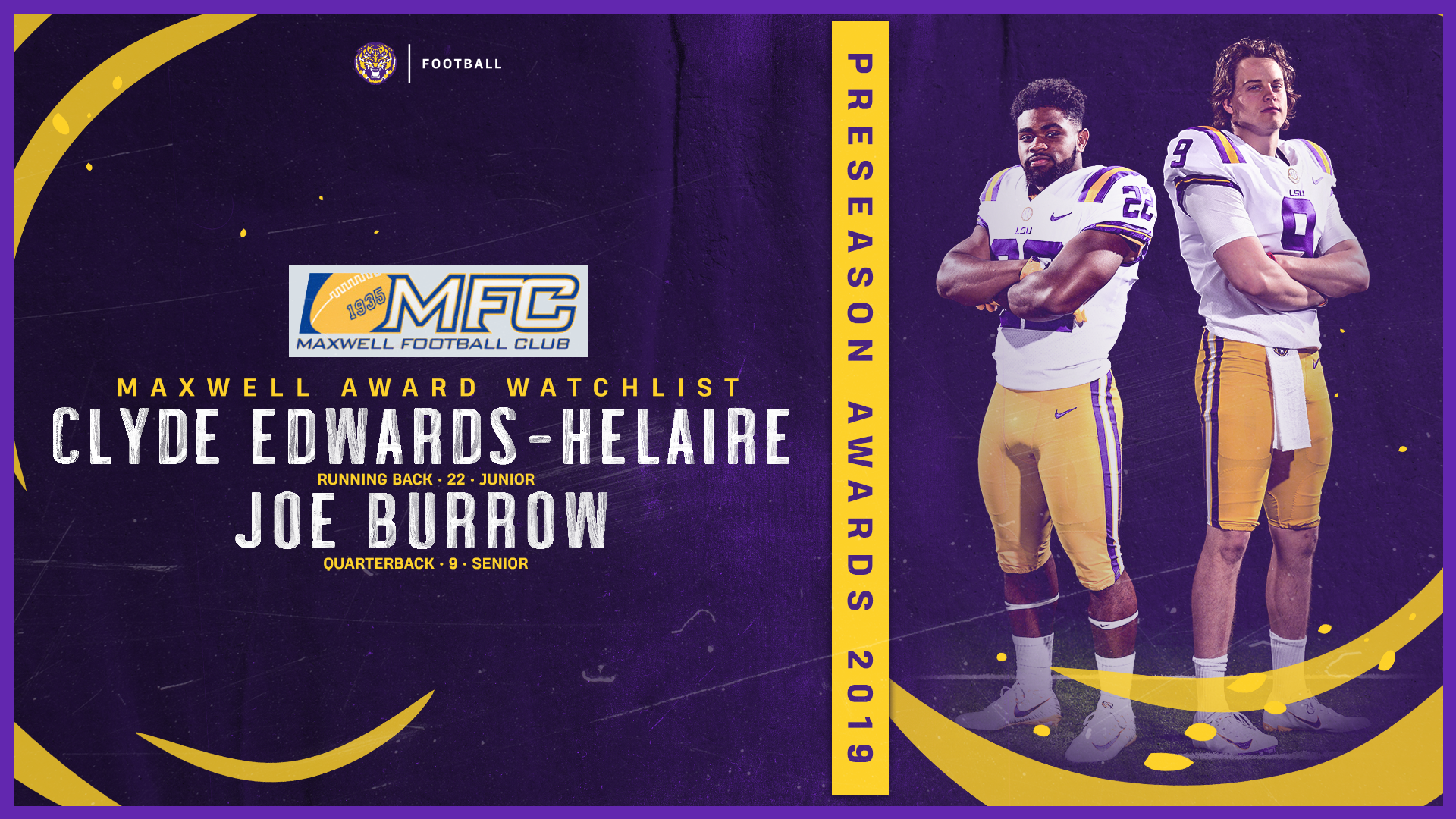 BATON ROUGE – LSU quarterback Joe Burrow and running back Clyde Edwards-Helaire have been named to the preseason watch list for the Maxwell Award, which has been presented annually to America’s College Player of the Year since 1937.

Burrow, a senior from The Plains, Ohio, and Edwards-Helaire, a junior from Baton Rouge, are both making their first appearance on a preseason award watch list.

Burrow returns as LSU’s starting quarterback after guiding the Tigers to a 10-3 mark and a Fiesta Bowl win over UCF last year. In 2018, Burrow became the first player in LSU history to throw for 2,800 yards and rush for more than 350 yards in the same season.

Of Burrow, LSU head coach Ed Orgeron said, “he’s a tremendous football player that has all the intangibles of a leader. He’s tough; he’s going to lead by example and his team believes in him. We expect him to have a great year.”

A year ago in his first year with the Tigers, Burrow set five school records on his way to passing for 2,894 yards and rushing for another 399 yards. He accounted for 23 total touchdowns (16 passing, 7 rushing) in putting together one of the best seasons for a quarterback in school history.

Burrow set the LSU single-game record for touchdowns accounted for with six (3 rushing, 3 passing) against Texas A&M, a game in which he also ran the ball 29 times for 100 yards and threw for another 270 yards.

Edwards-Helaire finished second on the team in rushing last year with 658 yards and seven TDs. He also ranked fifth in the SEC in kickoff return yards (416) and kickoff return average (24.5). He also led the Tigers and finished No. 11 in the league in all-purpose yards with 1,170, an average of 90.0 yards per game.

Edwards-Helaire had his best game as a Tigers in the win over No. 2 Georgia last year, rushing for 145 yards in the victory over the Bulldogs. Edwards-Helaire also rushed for 136 yards and a pair of touchdowns in LSU’s win over Louisiana Tech last season.