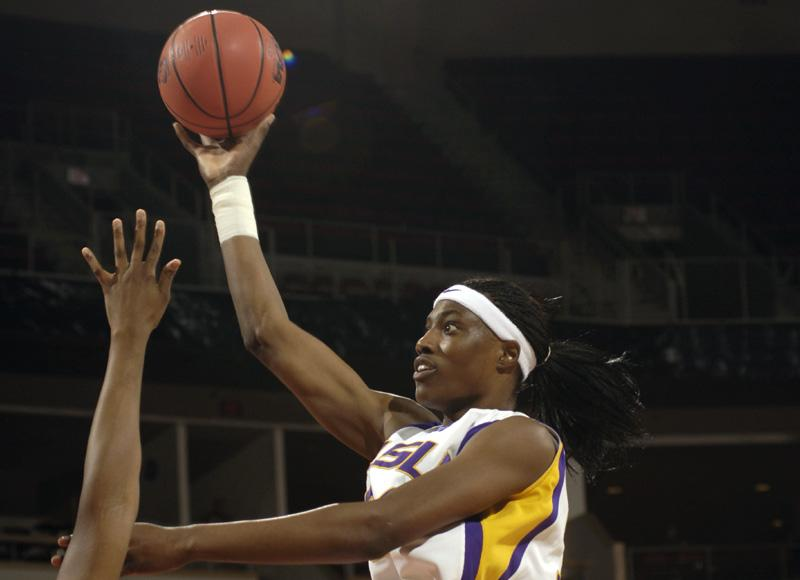 POMEZIA, Italy — Sylvia Fowles, a senior-to-be on LSU’s women’s basketball team, helped the 2007-08 United States Basketball Women’s Senior National Team to a 81-41 victory over the Pomezia Regional All-Stars in its final 2007 Tour of Italy Contest on Tuesday evening at the Palavinium.

Fowles scored nine points on 3-7 from the floor and a perfect 3-3 from the free throw line in 16 minutes of action. The 6-6 center also grabbed eight rebounds.

Fowles finished the four-game exhibition swing as the team’s second leading scorer with 10.3 points per game and the second leading rebounder with 7.0 per outing.

The U.S. squad will spend the next two days in Rome working on various strategies before reconvening in early Sept. following the WNBA season.

“We didn’t quite achieve our goals tonight,” said USA and Seattle Storm head coach Anne Donovan. “We wanted to get under 15 turnovers and obviously we didn’t take care of that. Then defensively our goal was to hold them to 40 points and we missed that one by one point. But I thought that overall we had pretty good focus against this team.

“It was really good to see the focus from all of our veterans and it carried down to the younger players. Courtney did a great job off the bench tonight. But (the younger players) don’t have those kinds of performances if Taj and Katie and Catchings aren’t taking care of business.”

The Pomezia All-Stars struck first with a bucket at 9:28, but their lead vanished as quick as it came. Catchings, who opened the USA’s scoring with a three, nailed her second bucket at 7:41 to give the USA a lead it would never relinquish, 5-4. With the USA ahead 13-9 McWilliams-Franklin sparked a USA 10-0 run that opened up the game 23-9 and by the end of the first quarter the USA was up 23-15.

Holding their opponents to five points in the second quarter, the American women sailed into the locker room with a 17-point, 37-20 advantage and never looked back. Outscoring Pomezia 19-7 in the third quarter and 25-14 in the final stanza the U.S. punctuated its four-game 2007 Tour of Italy with the 81-41 victory.

“I think it’s important to play well every night,” said Davenport. “But a lot of times the last impression is what sticks with you until the next training session and hopefully I left a good impression with the coaches and everybody here.”

The USA not only dominated in every fashion on the offensive end of the floor and on the glass (55-31), its defense forced the All-Stars into coughing up the ball 26 times and shooting a USA Tour of Italy opponent low of 23.2 percent (13-56 FGs) from the field. The U.S. connected on 45.5 percent (35-77 FGs) of its shots from the field.

“Our ultimate goal was to keep them under 40 points and obviously they had 41 so that’s kind of a disappointing thing when you look at the big picture,” said Catchings. “But coming into the game, in the fashion that we did, a little later than normal (due to traffic), but still being able to come out and focus as a team was quite a step. I think overall the coaches were pretty pleased with each one of us coming out and playing great defense. Jessica gave us some great minutes, Courtney played great tonight. Letting the young players come in and being able to show they’re focused is key.”

The U.S. was down to nine active players as Alana Beard (Washington Mystics) did not play for her second consecutive game due to a bruised left shoulder. She is listed as day-to-day.