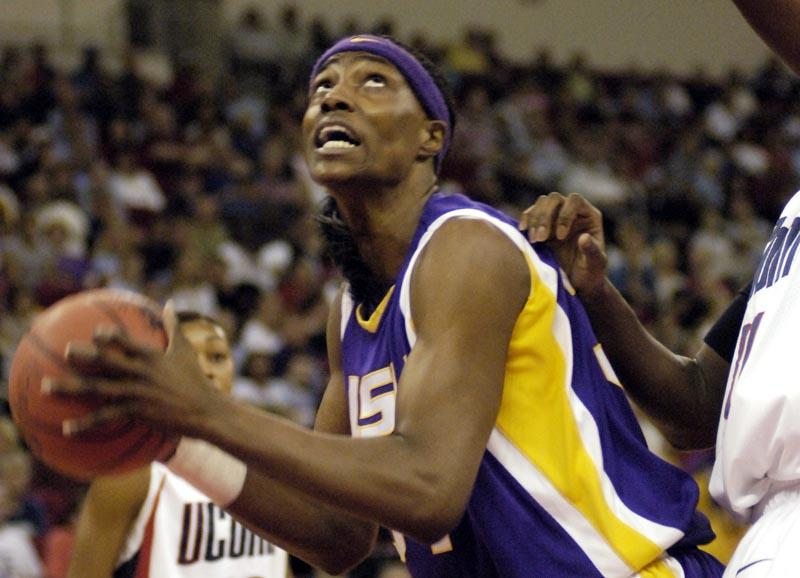 Tamika Catchings paced all scorers and rebounders with 15 points and 12 rebounds, while Taj McWilliams-Franklin contributed 11 points and 10 rebounds. With one game remaining against a Pomezia Regional All-Star Team tomorrow (10:00 p.m. CDT), the USA’s record on its 2007 Tour of Italy is a perfect 3-0.

“We came out of the gates strong and that was one of our goals tonight, to start the game well,” said USA and Seattle Storm head coach Anne Donovan. “Our starters took great responsibility to start it off the right way. We had some lapses in the first half, our goal was to hold them under 20 points, which we missed by one point. But I thought we came out in the second half and although our third quarter was a little weak defensively, we finished strong.

The U.S. scored first and never trailed. However, Viterbo kept it close through the first period that ended with the USA on top 15-12. Receiving points from four different players the Americans were ahead 23-15 less than three minutes into the second quarter. Swin Cash (Detroit Shock) contributed six points and had an assist on a Katie Smith (Detroit Shock) three in a 16-0 run that blew open the contest 39-15 with 4:01 to play before the end of the half. By the midway point in the game it was all USA, 47-21.

“In all three games we’ve had so far we’ve come out flat in the first quarter and that’s something that we continuously talk about,” said Catchings. “It’s something we really need to do heading into tomorrow night’s game. We picked it up after that. Once we set our defensive goals we really picked it up on defense. Our goal was 43 points and they scored 42 so we reached our goal and that’s a big step for us.”

Cruising through the second half, which saw the U.S. open the fourth quarter on a 17-0 tear, the United States came away with their third win in as many games.

In addition to Catchings and McWilliams-Franklin’s double-doubles, the USA’s efforts were further aided by 11 points from Jessica Davenport (New York Liberty) and Cash and Lindsey Harding (Minnesota Lynx) each notched nine points.

Ines Ajanovic had a team-best 14 points for the hosts.

The U.S. was down to nine active players as Alana Beard (Washington Mystics) did not play tonight due to a bruised left shoulder. She is listed as day-to-day.

The U.S. will return to Rome for a game against an all-star squad made up of top players from Italy’s Pomezia Region on April 17 (12:00 p.m. EDT) and will cap its Tour of Italy with practices on April 18 and 19.