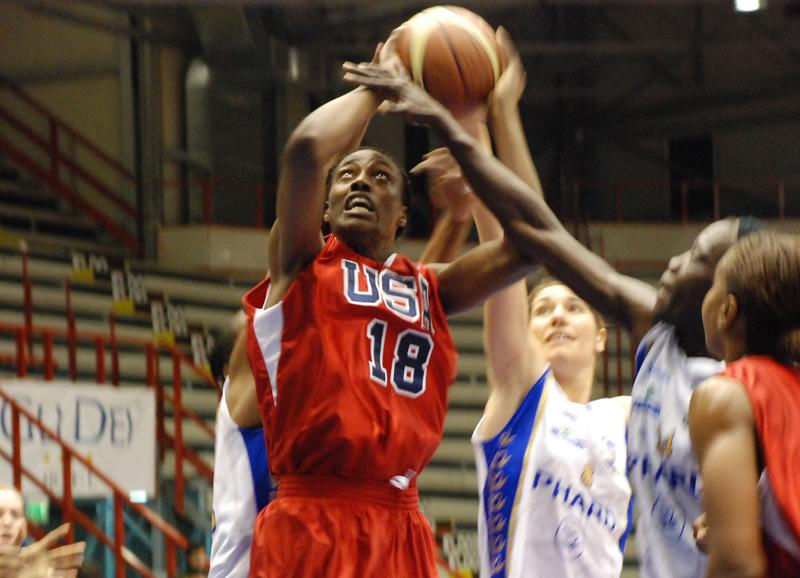 Much like its first game against the Italian National Team last night, the USA squad spent the first half in a tough battle but dominated in the second half for the win and is a perfect 2-0 at the midway point of its 2007 Tour of Italy.

“Once again we came out slow,” said USA and Seattle Storm head coach Anne Donovan. “Last night in the first half and again tonight we’re just not coming out with our starters putting the hammer down. I thought we did a better job at halftime, talked about some defensive adjustments, and our energy was better. That will certainly be our focus moving forward, starting the game and not waiting for the second half to start to kick in.”

Katie Smith (Detroit Shock) hit back-to-back threes to open the USA’s second half scoring, however, the Napels squad would not go away and with 13:46 to play the USA held a 44-43 edge. That was as close as it would get. The red, white and blue outscored Napoli 9-2 over the remainder of the quarter and owned a 53-45 lead heading into the final stanza.

Fowles played a key role in the USA’s run. After getting the first bucket of the spurt, she had a steal and a pair of rebounds on Napoli’s next three possessions, helping to put Katie Douglas (Connecticut Sun) and Swin Cash (Detroit Shock) in scoring position on the offensive end.

Never letting up in the fourth quarter, the USA forced their hosts into shooting a frigid 15.4 percent (2-13 FGs) from the field and coughing up the ball six times, while outscoring Napoli 19-4 for the eventual victory.

In addition to Catchings’ team-high 14 points and 11 rebounds, the USA’s offense was powered by 11 points apiece from Beard and Cash and nine from Smith.

The Detroit Shock’s Kedra Holland-Corn finished with a game-best 16 points, while Nicole Antibe and Astou Ndyiaye each notched 10 points.

The USA will spend the next three days practicing for its final two contests in Italy as the USA is slated to meet the professional team Pallancestro Viterbo on April 16 (3:00 p.m. EDT) in Viterbo. The U.S. will return to Rome for a game against an all-star squad made up of top players from Italy’s Pomezia Region on April 17 (12:00 p.m. EDT). The USA will cap its Tour of Italy with practices on April 18 and 19.