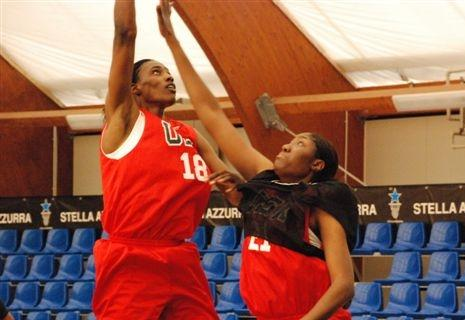 ROME, Italy — LSU’s Sylvia Fowles led the 2007-08 USA Basketball Women’s Senior National Team to a run away 77-47 victory over the Italian National Team on Wednesday evening at the Pallazetto dello Sport in front of a packed house and an Italian nationally televised audience in the 2007 Tour of Italy.

Fowles, a senior-to-be, for the Lady Tigers, scored a team-high 15 points and grabbed eight rebounds in 20 minutes of action. The 6-6 center went 7-10 from the floor and hit one of two free throw attempts in the victory.

“In talking to the veterans I knew I had to go out there and be physical,” Fowles said. “Especially playing on this level, you’re going to get knocked around a little bit so you have to just go out there and help your teammates out, especially defensively. If they’re banging, you have to bang as well.”

The USA won’t have much of a rest as its next game is tomorrow, April 12, versus the professional team Phard Napoli in Naples (2:30 p.m. CDT). After three additional days of practice the USA is slated to meet the professional team Pallancestro Viterbo on April 16 (2 p.m. CDT) in Viterbo. The U.S. will return to Rome for a game against an all-star squad made up of top players from Italy’s Pomezia Region on April 17 (Noon. CDT). The USA will cap its Tour of Italy with practices on April 18 and 19.

The teams traded turnovers, missed shots and baskets over the first six and a half minutes of the game, but with the USA ahead 10-9 the red, white and blue got nine points from four different players to jump in front 19-9 at the 1:53 mark. However, the 10-point lead was short lived. Italy hit a 13-6 scoring spurt that ended with a three with 7:27 to go in the half and the USA’s gap dwindled to 25-22. Italy remained within striking distance and at halftime the Americans were up 36-31.

A 14-0 scoring spree to open the second half pried the game wide open for the U.S., thanks in part to eight points from Mc Williams-Franklin. The Americans continued to dominate the third quarter and outscored Italy 23-4 in all during that 10-minute span to put the game away. The USA’s defensive pressure forced Italy into shooting a paltry 14.3 percent from the field (2-14 FGs) in the third and forced five turnovers, while connecting on 53.3 percent (8-15 FGs), committing just two turnovers and grabbing 13 boards.

McWilliams-Franklin shot a perfect 5-of-5 from the field and 4-of-4 from the line and also collected seven rebounds on the night. While they were the only two U.S. players in double digits, Tamika Catchings (Indiana Fever) had nine and Michelle Snow (Houston Comets) scored eight points.