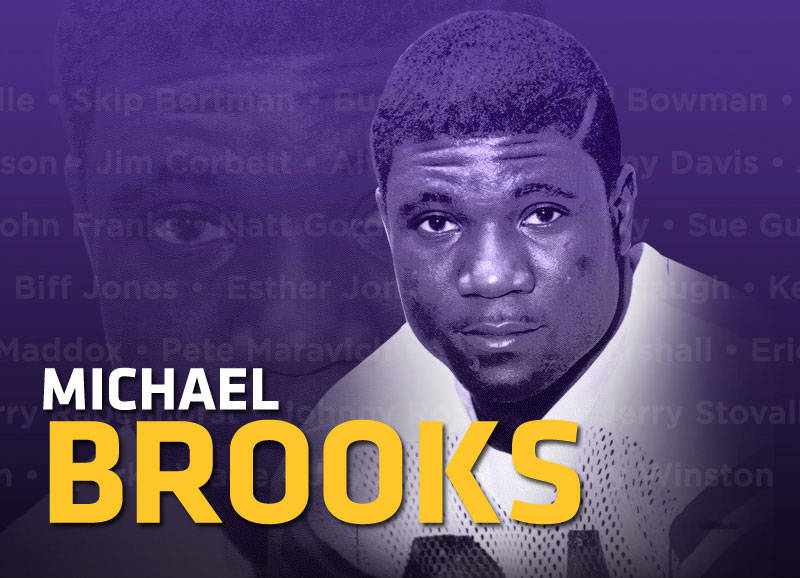 Michael Brooks let his play on the field do the talking.

The ultimate quiet man who enjoyed a solid 10-year career in the National Football League was never one to pat himself on the back or make a big deal out of an  accomplishment.

But his on-the-field performance at all levels spoke volumes, loudly enough to earn him his upcoming induction June 27 in the Louisiana Sports Hall of Fame in Natchitoches.

“We used to call him ‘E.F. Hutton,’ “ said Pete Jenkins, defensive line coach during Brooks’ days at LSU. “You remember they had that commercial that said, ‘When E.F. Hutton talks, people listen’. Well, when Michael said something, folks stopped what they were doing and listened.

“They knew he meant business and had something to say that could help everybody be a better player and our team successful.”

At Ruston High School, he was a two-time All-State defensive end who helped lead the Bearcats to a Louisiana High School Athletic Association Class 4A state championship in 1982. It was the first of four RHS state titles during the Jimmy “Chick” Childress coaching era.

“He was outstanding that entire season,” recalled the Louisiana Sports Hall of Fame coach about Brooks’ contributions in 1982. “Most of the time, folks were trying to run away from him.

“He was a natural. He had a great combination of speed, power and quickness.”

Brooks went from his interior position with the Bearcats to a linebacker slot at LSU and never missed a beat. He was named to two different All-American teams as a junior before a knee injury knocked out his chances of becoming one of the few two-time All-Americans in the school’s history.

No matter. The pro scouts had seen enough. In 1987, the Denver Broncos drafted him in the third round and he went on to enjoy a decade of employment in the NFL, including a Pro Bowl berth in 1992.

“I was fortunate to play in the league 15 years and be around a lot of great players,” said Michael Strahan, the NFL’s Defensive Player of the Year in 2001, a seven-time Pro Bowler and two-time NFC Defensive Player of the Year who was a New York Giants’ teammate of Brooks from 1993 until 1995. “He’s the toughest man I have ever been around and I was with the Giants for one year while Lawrence Taylor was there.

“Of course, ‘L.T’. was tough as nails. But Michael Brooks? Man, I would want him by me if I had to go fight somewhere. That is one solid man of intimidating muscle.”

As the years in Brooks’ sterling career progressed, a variety of nicknames would trail his chiseled 6-1 and 235-pound physique.

Good reason for the latter nickname.

“My first training camp with the Giants, we are running this short yardage drill and one of the running backs breaks for what appears to be a touchdown,” Strahan recalled about a practice session in 1993. “Then out of nowhere, here comes Michael and he delivers a hit so hard that the guy literally flies through the air like Superman.

“And I’m thinking, ‘Oh God, I’m just glad I’ve got Michael Brooks on my side.’ I had never seen anything like that, but it gives you a good idea as to how powerful, quick and strong he was and the type of impact he could make on the field.”

And to think that Brooks almost didn’t even step on a football field.

“As I often did, I would keep a close watch on potential players for our team just walking down the halls,” remembered Childress. “Sometimes, that’s where you find some of your best ones. So, one day, I saw Michael and told him to think about giving football a try and if he didn’t like it, then fine.”

Brooks tried it coming into his junior year, liked it and the rest is history. Brooks had a combined 201 tackles, five pass interceptions, four fumble recoveries and 16 quarterback sacks during his two seasons as a prepster. Each year, he earned first-unit All-State honors in Class 4A, at the time the state’s largest.

“I always liked football, but until coach Childress and coach Williams (Greg, then the RHS defensive coordinator) spoke to me about coming out, I hadn’t thought much about it,” he said. “I had a social studies class under coach Williams and used to tease him about the team needing somebody like me to help keep turning things around.

“The next thing I know, coach Childress is asking me to come out. I’ve been grateful to him ever since because no telling how things might have turned out.”

When the ‘Cats nudged rival Monroe Neville 8-0 in the 1982 championship game at the Louisiana Superdome, it was Brooks who recorded a safety in the final three minutes.

“We would try and double-team him and run away from him, but he was so quick and strong that it didn’t do much good,” recalled former Tigers’ coach Charlie Brown, a Louisiana Sports Hall of Famer. “Whatever you did, Michael would eventually catch on to it.”

Brooks lost his father, Oscar Brooks, at the age of 16. It was a huge blow because father and son were close. The younger Brooks idolized his father.

“I guess I’m quiet by nature because my father never said much, but always worked hard and made sure the family was provided for,” he said.

“He believed in a person making something out of himself by working hard and doing the right things. He did carpentry work and painting and would always be helping one of the neighbors fix up things. So the hard work was instilled in me at an early age.”

That approach helped Brooks make the transition from a down lineman in high school to linebacker in college as if it was second nature.

“Michael would be the right person for whatever spot you put him in. because he was such an intelligent player who could quickly recognized what offenses were going to do,” said Arnsparger, who was at LSU from 1983-86. “He was a quiet guy who didn’t say a lot, but when he did, his teammates respected him and they listened to him.”

Just as running back Jessie Armstead, Strahan and other younger players did when they were with the Giants during Brooks’ three-year (1993-95) stay.

“He made my NFL career just by his work habits,” Armstead said. “I would watch him with the intensity and passion he had for the game and I immediately started pattering myself after him. He never said a whole lot, but he had the presence of a fierce warrior. He never would brag on himself or make a big deal out of something he did, but would rather let his actions show what he was made of and what he meant to others.

“Honestly, because of how he portrayed himself as a leader and mentor, it helped my career start blossoming.”

Mike Nolan, the defensive coordinator for the Broncos, was at LSU and with the Giants during Brooks’ time at both places.

“From a pure physical standpoint, he was a compact guy with tremendous
explosiveness and strength,” he said. “But he also had a tremendous football awareness about him. He was like having another instructor on the field because he knew where the football was going to be. He might not have gotten the attention of an L.T., while he was in New York, but all of us realized the impact he was making.”

Brooks and Wilson were co-captains during their senior year at LSU.

“He had a great passion for the game,” recalled Wilson, whose nine-year NFL career would include eight different teams. “I would call him ‘Killer’ because he had such a great work ethic and intensity about everything he did. I had his back and he had mine and, I tell you, I would definitely want Michael on my side if we were going to war.”

Brooks spent his first six years in the NFL with the Broncos before heading to the Giants and then wrapping up his career with the Detroit Lions in 1996.

Playing a major role in his decision to retire was the death of his mother, Louise, from a long battle with cancer in 1997.

“I moped around and was depressed after she died,” he said. “I didn’t care much about anything and had no desire to keep playing. I had always called my mother while I was still playing and she would always tell me to remain strong, believe in myself and do the best I could. It really hit me hard like when she passed away. It took me about two years to get over her being gone.”

No doubt, when Michael Brooks joins other legends from Louisiana’s sports circles as a Hall of Fame inductee, she will be looking down on her son with pride.

Rick Bishop Mic'd Up During Practice at Air Force Academy

Rick Bishop Mic'd Up During Practice at Air Force Academy