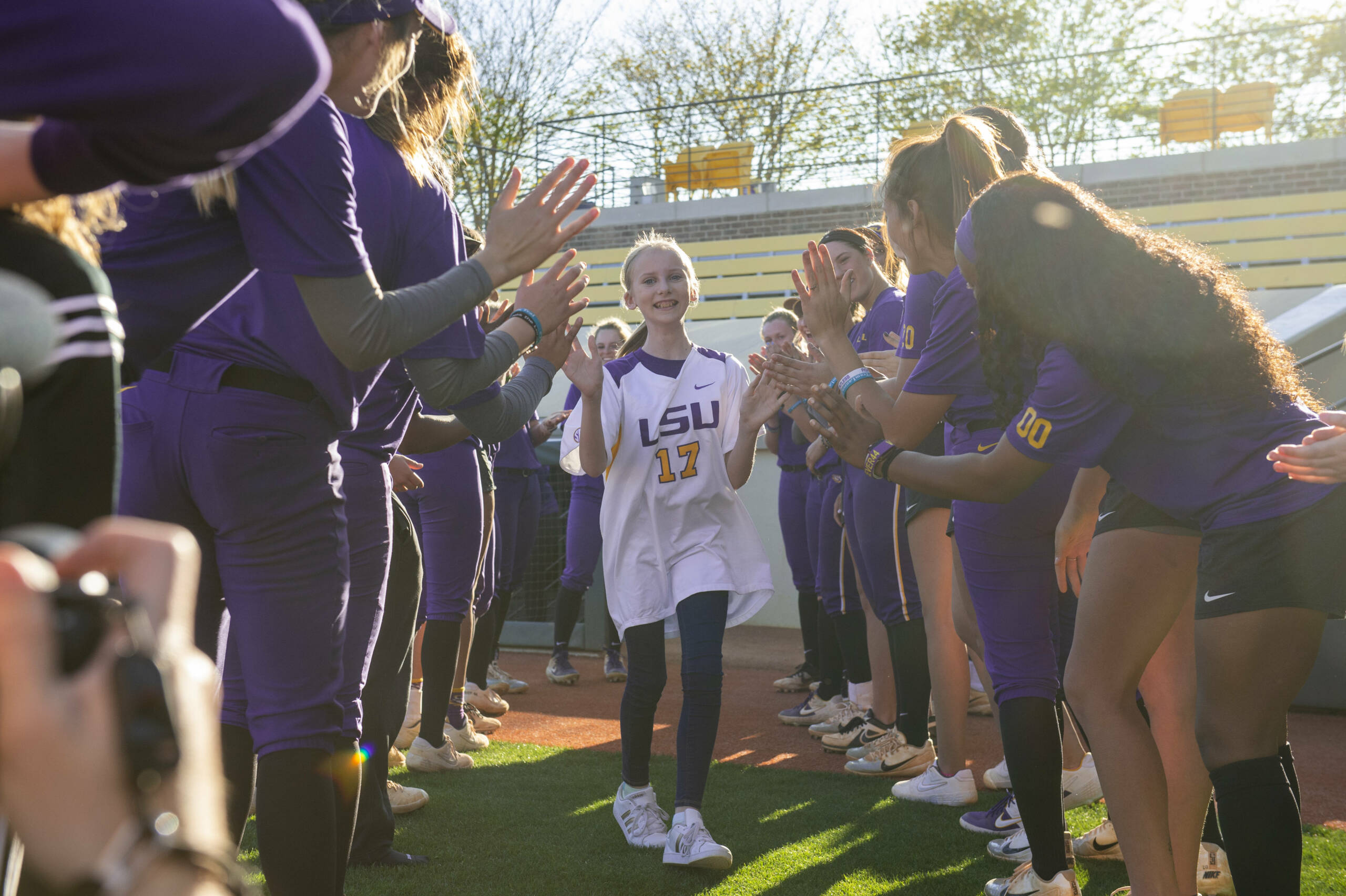 In 11 seasons as a Division I softball head coach, Beth Torina has signed dozens of letters of intent.

The one she signed Wednesday might be the one she remembers longest.

With that signature, the LSU softball program welcomed 12-year-old Jill Vickers and her family to the team. It’s the first step in a new journey that partners the Tigers with Jill and her family as they fight her Ewing’s sarcoma diagnosis.

“I have signed a lot of these in my life for a lot of wonderful people, but I don’t know if I’ve ever been more honored than to sign this one right here,” Torina said.

Torina, her staff, the softball team, and Denis and Jaclyn Murphy of the Friends of Jaclyn Foundation were there at Tiger Park Wednesday to welcome Jill and her family to the program in a special signing day ceremony. Founded by Denis in 2005 while Jaclyn, his daughter, was fighting a malignant brain tumor, the foundation connects children battling pediatric brain tumors and other childhood cancers with local teams, clubs, and community groups.

After team introductions, Vickers heard her name called over the public address, and she took the field through a tunnel of Tigers to her signing station. There, she received the team’s Fighter bracelet, handed out after every game or practice to the player who showed the most fight and earned its possession.

“It’s just evident of the fight you’ve shown,” junior Amanda Doyle told Jill. “We think you’re so deserving of this and so much more.”

The ceremony ended with the singing of the fight song and alma mater, before Jill and her family joined for their first team meal.

Torina first worked with Friends of Jaclyn at Florida International, where she was head coach from 2008-2012.

Denis and Jaclyn shared their story before the signing ceremony, which, serendipitously enough, took place 15 years from the day Jaclyn first received her diagnosis and, thankfully, one day after an MRI revealed she currently has no evidence of disease.

An avid athlete, Jaclyn took up lacrosse at a local camp near her upstate New York home before her diagnosis sidelined her indefinitely. When the coach at the camp called to check in and discovered her situation, he reached out to a contact at Northwestern.

Eventually, the program adopted Jaclyn, bringing her to games and constantly sending her messages of encouragement that helped her stay positive in her fight.

The idea to form a foundation came to Denis and Jaclyn one day on the ninth floor of the Memorial Sloan Kettering Cancer Center.

“The ninth floor of any pediatric oncology hospital is the saddest place on the planet,” Denis said. “You have these good doctors that are caring and trying to save these kids’ lives, but the beast is there, 24/7/365, attacking these children.  That’s, to me, where heaven and hell meet.”

On this particular day, Jaclyn, seated next to a young, terrified girl about to enter chemotherapy, was in her own slice of heaven, smiling and messaging her Northwestern friends in Chicago.

“She’s sitting in hell, and she’s oblivious,” Denis said. “The light bulb started getting brighter and brighter. The little girl got called in for chemo, and Jaclyn said, ‘Dad, you’ve got to get her a team.”

Nearly 15 years later, Friends of Jaclyn has paired more 850 teams with children and their families. Today, they offer three programs: the Adopt a Child program, which is how Jill joined the Tigers. There’s also the Jaclyn’s Angel program, designed for children on hospice not well enough to be adopted by a team. Instead, they and their families receive messages of support from teams across the country.

Finally, there’s the Safe on the Sidelines program to help support the siblings of those children afflicted with cancer.

“My sister was seven years old when I was diagnosed,” Jaclyn said. “My parents were constantly with me, and my parents would put her with neighbors, friends, teachers, and family, and she’d be tossed around like a rag doll. It was unintentional neglect my parents were giving her, because they were trying to get me better.”

Of all the positive benefits each program offers, the one that Denis considers most important is the longevity. Jaclyn still maintains her relationships with the Northwestern lacrosse players who befriended her so long ago.

“This isn’t a one game, one season deal,” Denis said. “Jillian is going to be a Tiger for the rest of her life.”

Her first day was undoubtedly a success. Jill donned her No. 17 jersey, traded high-fives with Mike the Tigers, and signed her letter. Her new teammates, meanwhile, flooded her with hugs, traded phone numbers, and took turns holding her one-year old sister and hanging out with her older siblings.

“Our mentality is to fight on the field,” Doyle added, “but we also need to think to fight for something else and someone else, for someone who can’t. We can fight for Jill and her family just like they fight every day.”

Those interested in supporting the Friends of Jaclyn Foundation can visit their website at FriendsOfJaclyn.org. Fifteen years since the start of their fight, the Murphys have formed an incredible team of fighters across the country. The latest fighter, Jill, left Tiger Park on Wednesday with an ear-to-ear smile, and a team of new friends behind her had smiles to match.

“What I’ve learned on this journey is there’s no chemotherapy, there’s no radiation treatment, there’s no clinical trial drug more powerful than love, support, and friendship,” Denis said. “That’s what the LSU Tigers are going to give Jillian.”