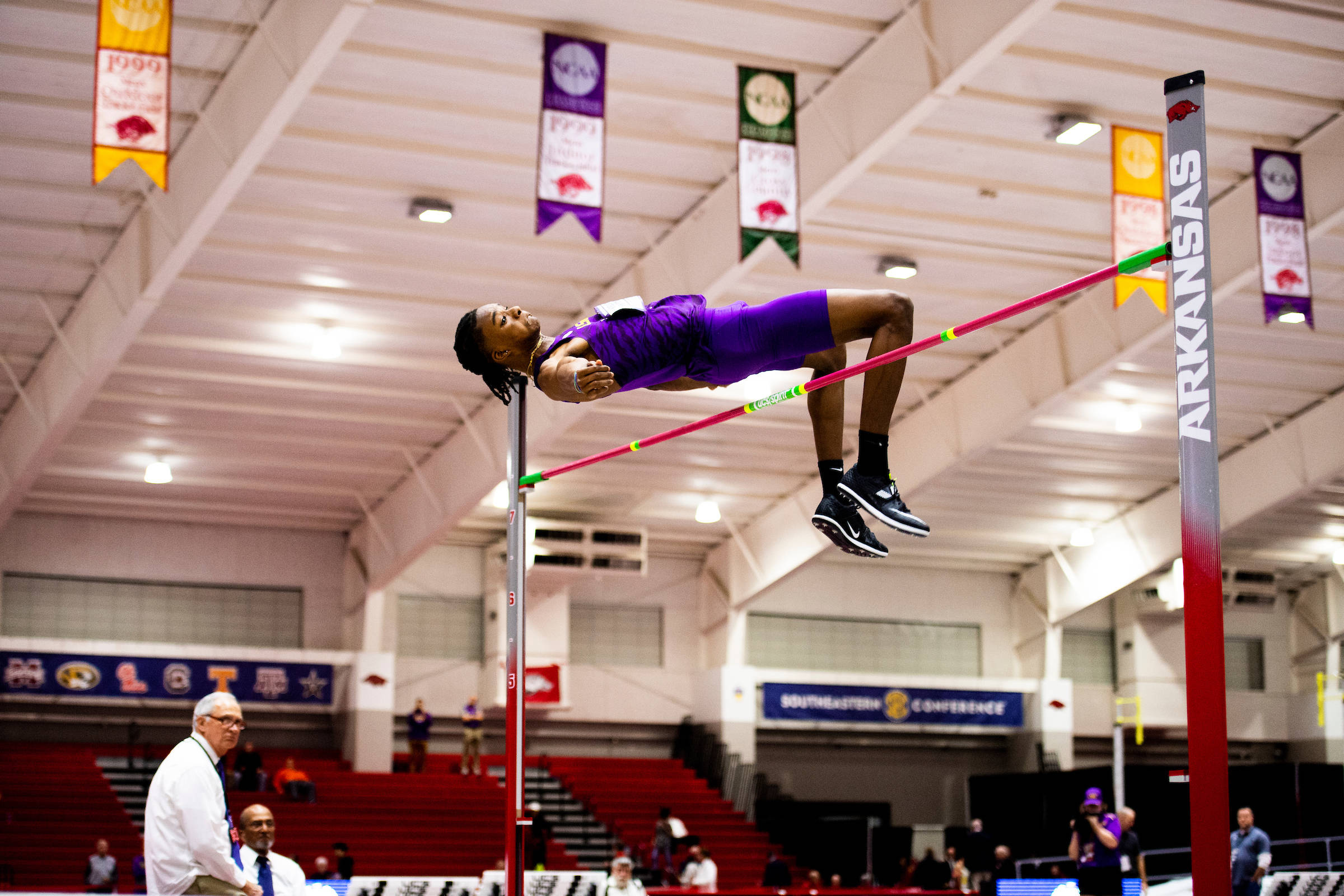 Baton Rouge, La. – The LSU track and field team is sending 21 athletes (11 women, 10 men) to the 2019 NCAA Indoor Track and Field Championships in Birmingham, Alabama. The two-day meet will be hosted at the Birmingham CrossPlex on Friday and Saturday (March 8-9).

The meet will be streamed on WatchESPN Friday and Saturday (links below). A day after the conclusion of the meet, the action will be aired on ESPN Sunday night, March 10, at 6 p.m. CT, and a re-air of the tape-delayed footage will be shown on ESPNU Monday night at 8 p.m. CT.

LSU is making the return trip to Birmingham to close out the indoor season. The Tigers have 14 individual entrants and will close out the meet with the women’s and men’s 4×400 meter relay. Kortnei Johnson (60 meters), Rayvon Grey (long jump) and Mondo Duplantis (pole vault) enter the meet with the top marks in the nation in their events. Both the men and women enter the meet ranked No. 3 in the USTFCCCA rankings.

Kortnei Johnson (60/200m dash), Sha’Carri Richardson (60m/200m dash), Jaron Flournoy (200m dash) and Dylan Peebles (200m dash) are the four sprinters set to compete individually. Johnson owns the fastest time in the nation in the 60 meters, a 7.14 that she clocked at the LSU Twilight on Feb. 15. The time of 7.14 was a personal best for Johnson and it ranks ninth on the world stage in 2019. Johnson and Richardson both rank 12th in the 200 meters with a season-best times of 23.08 that they both clocked at the Tyson Invitational on Feb. 8. Richardson is the only freshman in the country to be qualified for both the 60 and 200 meter dash on the women’s side.

Johnson, an eight-time All-American, has scored at the NCAA indoor meet three times. She took fifth in the 200 meters and seventh in the 60 meters at last year’s championship meet, and she finished sixth in the 60 meters at the 2017 national meet. This is her third-straight year in which she is entered in both the 60 and 200 meter dash at the national meet. Flournoy is a seven-time All-American and has scored at the last two NCAA indoor meets. In 2018, he took fourth in the 200 meters with a personal best of 20.55 seconds and he was a member of the 4×400 meter relay team that finished sixth. As a sophomore in 2017, the Detroit, Mich., native helped the 4×400 meter relay to a fourth-place finish. This will be the first NCAA indoor meets for Richardson and Peebles.

The duo of Ersula Farrow and Katy-Ann McDonald will represent the Purple and Gold in the 800 meter run. McDonald registered her NCAA qualifying time of 2:05.11 in the prelims of the SEC meet to rank 11th nationally. Farrow’s qualifying time of 2:05.45 came at the Razorback Invitational in late January; the 2:05.45 rates 14th in the NCAA. McDonald’s career-best readout of 2:05.11 is the ninth best in LSU history. Both McDonald and Farrow will be making their individual NCAA indoor debuts.

The jumps crew will be on the hunt for some natty titles with three athletes that own top-three national marks. Mondo Duplantis, Rayvon Grey and JuVaughn Harrison will get the meet started for LSU on Friday night at 5:30 p.m. Duplantis, the NCAA collegiate record holder, will compete in the pole vault for the fifth time this season; he set the collegiate record with a clearance of 5.92 meters (19’ 5”) at the SEC Championships to claim gold.

Grey, an SEC champion himself, will look to rise to the top of the sand pit with a quality performance in the long jump. Grey’s NCAA-leading mark of 26’ 5.50” (8.06 meters) came at the Red Raider Invite in mid-January. Most recently, Grey defeated a solid field of long jumpers at the SEC meet to win his first-career SEC title.

Harrison is the only field athlete on LSU’s squad that has a chance to score in two events as he is entered in the long jump (Friday) and high jump (Saturday). Harrison owns the second-best mark in the high jump in the nation with his personal-best clearance of 7’ 5.75” that he registered at the SEC Championships to claim his first-career SEC title. That high jump mark of 7’ 5.75” is the second-best in LSU history. Harrison owns the 12th-best long jump mark in the NCAA this year, a mark interestingly enough that he registered at the season-opening meet in Birmingham. The sophomore, who is from Huntsville, Ala., leapt out to a distance of 25’ 8.25” (7.83 meters) in the long jump that day.

Abby O’Donoghue secured her berth into the NCAA Championships with a personal best clearance of 5’ 11.50” (1.82 meters) at the SEC Championships en route to winning her first-career SEC title. The mark of 5’ 11.50” ranks fifth on the indoor list at LSU alongside her mother, Kelli O’Donoghue.

All four of the jumpers entered in events at the NCAA Championships this weekend won SEC titles just two weeks ago. Of the four jumpers, Harrison is the only one with NCAA indoor championships experience; he finished 14th in the high jump a year ago.

The hurdling trio of Tonea Marshall, Brittley Humphrey and Damion Thomas will line up in the blocks for semifinals on Friday evening. Marshall, who owns a personal best of 8.04, ranks as the fifth-fastest collegian this season. She clocked the 8.04 at the Tyson Invitational on Feb. 8 in Fayetteville, Ark. Humphrey, a native of Hoover, Ala., will be making the trip back home as the 14th-fastest hurdler in the nation. She ran a season best of 8.10 at the SEC Championships in the finals to take fourth overall and qualify for the NCAA meet. Thomas’ career best of 7.66 came at the Red Raider Invite in mid-January. For NCAA qualifying purposes, the mark of 7.66 was converted to 7.68 due to the mark being run at altitude; the time of 7.68 ranks as the sixth fastest in the NCAA. All three of the hurdlers competed at the 2018 NCAA Indoor Championships for LSU. Marshall placed seventh in the women’s finals, Thomas took eighth in the men’s finals, and Humphrey took 11th overall.

Jake Norris will make his first-career appearance at an NCAA indoor meet this weekend with the weight throw on Saturday. Norris registered his career-best mark of 71’ 7.25” (21.82 meters) at the LSU Twilight on Feb. 15 to qualify as the 14th best collegian in 2019.

Both the 4×400 meter relay squads registered season-best marks at the SEC Championships to qualify for the national meet. The foursome of Tyler Terry, Dylan Peebles, Correion Mosby and Jaron Flournoy went 3:04.69 to take silver at the conference meet; the time qualified them for nationals and it was the eighth fastest in program history. The women’s foursome of Rachel Misher, Milan Young, Brittley Humphrey and Kiya Oviosun clocked a time of 3:33.72 to advance to the national meet.

Of the 21 athletes travelling to Birmingham, eight have competed at the NCAA Championships. Kortnei Johnson is the most experienced having earned eight All-America honors during her first three years in Baton Rouge, and Jaron Flournoy of the men’s team is a seven-time All-American. Returning scorers from the past NCAA indoor meets includes Johnson, Flournoy, Tonea Marshall, Rachel Misher and Damion Thomas.

The LSU women have scored the most all-time points at the NCAA indoor meet in the 60 meters, 200 meters, 800 meters, 60 meter hurdles, triple jump, and long jump. The Lady Tigers have athletes entered in the 60 meters, 200 meters, 800 meters, and 60 meter hurdles this weekend with chances to add more points to their NCAA-leading totals in the record book. The LSU women’s 4×400 meter relay has historically performed very well with the second most points ever, 158, in the event.

The men have a number of events in which they have traditionally been successful in. LSU has the third-most long jump points (99) in NCAA indoor history, the fourth most points in the 4×400 meter relay (110 points), and No. 5 all-time marks in the 60 meter hurdles (69 points) and 200 meter dash (62.5 points).

Two school records and 17 additional top-10 marks in school history have been registered in 2019. Mondo Duplantis (5.87m/19’ 3”) and Lisa Gunnarsson (4.51m/14’ 9.50”) are both the school record holders in the pole vault. Duplantis set his mark at the Bayou Bengal on Feb. 1, and Gunnarsson’s mark came at the Razorback Invitational in late January. The latest group of athletes to add or better their top-10 marks to the record book are Jaron Flournoy (200m dash), Dylan Peebles (200m dash), Katy-Ann McDonald (800m run), JuVaughn Harrison (high jump), Abby O’Donoghue (high jump), Julia Palin (3,000m run) and the men’s 4×400 meter relay. All of their marks occurred at the SEC Championships.