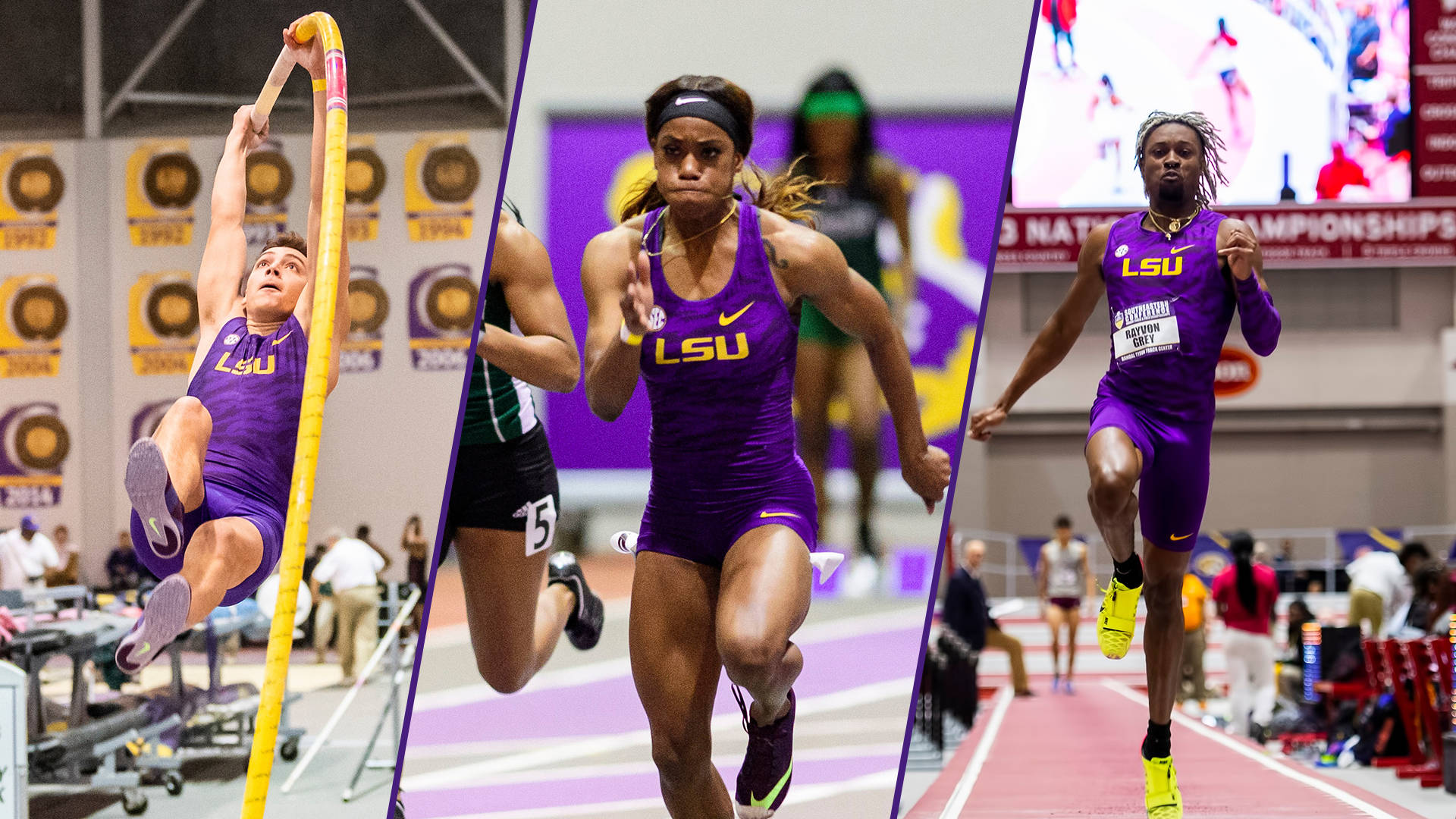 Baton Rouge, La. – The LSU track and field team has advanced 22 athletes to the 2019 NCAA Indoor Championships that will take place next week (March 8-9) in Birmingham, Ala., at the Birmingham CrossPlex.

The two-day meet will begin on Friday and conclude Saturday evening in Birmingham. LSU will have three athletes entered in the meet with the No. 1 seed in their event; Mondo Duplantis (pole vault), Kortnei Johnson (60 meters) and Rayvon Grey (long jump) all have NCAA leading marks. Duplantis set his season best last weekend at the SEC Championships; the freshman from Lafayette, La., cleared a collegiate record height of 5.92 meters (19’ 5”) in the pole vault to win an SEC title. Johnson’s career best of 7.14 in the 60 meter dash came at the LSU Twilight on Feb. 14, and Grey’s career-best long jump bound of 8.06 meters (26’ 5.50”) came at the Red Raider Invite in Lubbock, Texas, in January. All three – Duplantis, Johnson, Grey – won SEC titles last weekend.

In addition to being qualified for the 60 meters, Johnson will also compete in the 200 meters; she owns the 13th-fastsest time in the nation (23.08). Speaking of double qualifiers, freshman Sha’Carri Richardson is entered in the exact same two events as Johnson. Richardson will enter the meet with the No. 5 national time in the 60 meters (7.20) and the 12th quickest time in the 200 meters (23.08). On the men’s side, JuVaughn Harrison will compete in both the long and high jump. His career best of 2.28 meters (7’ 5.75”) that he registered last weekend at the SEC Championships to win a conference title ranks as the third best in the nation; it should be noted though, Harrison took down NCAA No. 1, Shelbey McEwen (Alabama), for the SEC title. Harrison will do the long jump on Friday, an event in which he ranks No. 13 in the nation, and compete in the high jump on Saturday.

LSU is the only women’s team to have two runners in the 800 meter run. Katy-Ann McDonald clocked a personal best time of 2:05.11 in the event during the preliminary round of the SEC Championships to rank 11th nationally, and Ersula Farrow will enter as the 14 seed in the event (2:05.45). McDonald is the only freshman in the event.

Both of LSU’s 4×400 meter relay’s clocked season bests at the SEC meet to earn qualifying bids to the national meet. The men’s foursome of Tyler Terry, Dylan Peebles, Correion Mosby and Jaron Flournoy clocked a 3:04.69, the eighth-fastest readout in LSU history, to earn the No. 6 national seed and take silver at the SEC meet. The women’s 4×400 meter relay – Rachel Misher, Milan Young, Brittley Humphrey, Kiya Oviosun – went a season best of 3:33.72 at SECs to rank 10th nationally.

A full list of qualifiers and their rankings can be found below. The NCAA Indoor Championships will be streamed on WatchESPN both Friday and Saturday (March 8-9), and a re-air of the meet will be shown on ESPN2 on Sunday, March 10 at 9 p.m. CT. ESPNU will additionally re-air the coverage on Monday, March 11 at 9 p.m. CT.