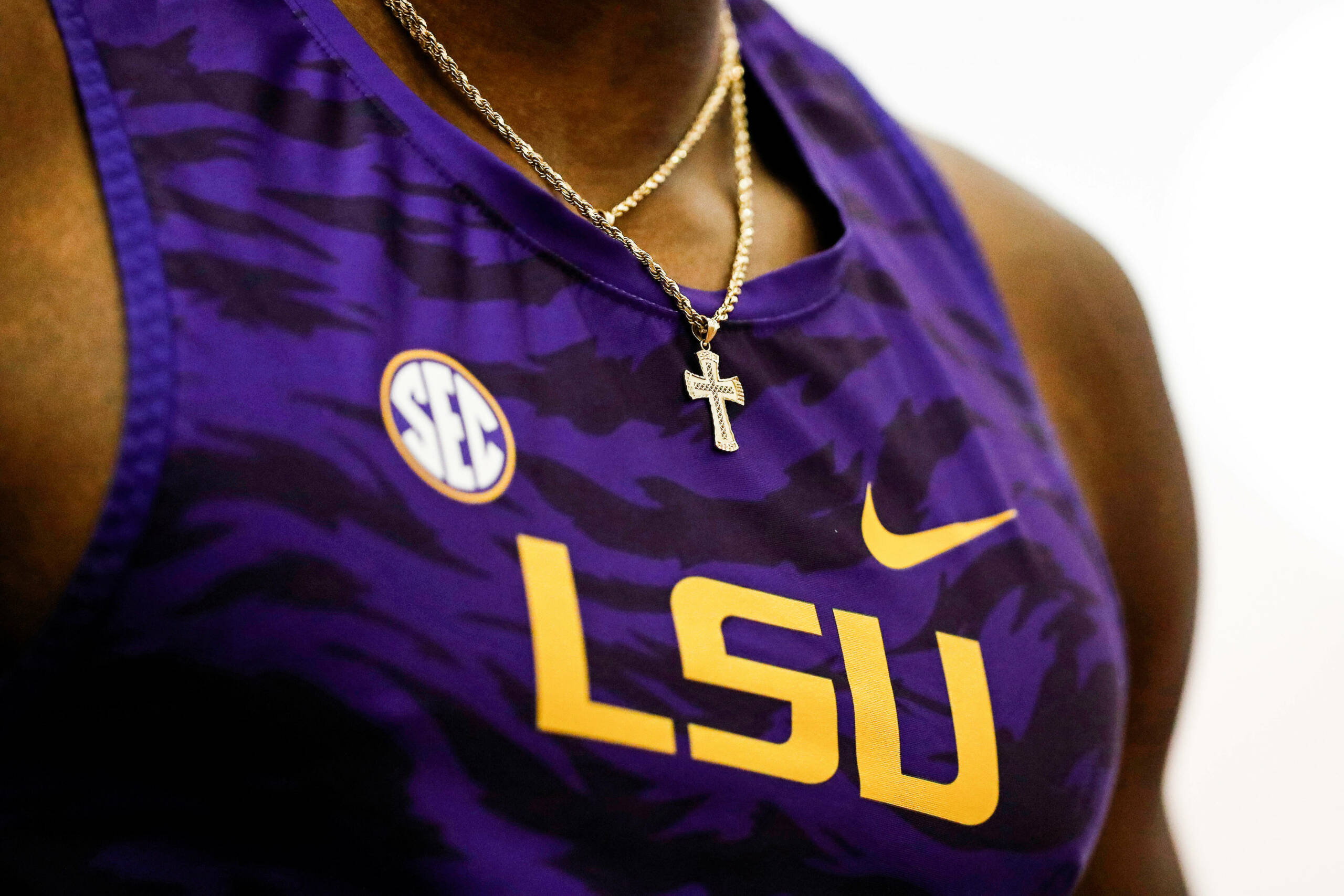 Baton Rouge, La. – The LSU track and field team will make its third trip of the season to Fayetteville, Ark., this weekend for the SEC Championships that will take place on Friday and Saturday. The women enter the meet ranked fourth nationally and the men are ranked fifth in the nation. The two-day meet that will be live streamed will take place at the Randal Tyson Track Center.

Forty-three athletes (22 men and 21 women) are on the travel roster for LSU to the first postseason meet of the year. The two-day meet will be streamed on SEC Network+ on Friday from 3:30-7:30 p.m. CT and Saturday from 2:55-6:30 p.m. CT. A re-air of the meet will be shown on the SEC Network at 7 p.m. CT on Sunday evening. The broadcast talent includes Dwight Stones, Jill Montgomery and John Anderson.

The SEC Championships will officially get started for LSU at 11:15 a.m. CT on Friday morning with freshman RC Walbrook competing in the heptathlon. He’ll do the 60 meter dash, long jump, shot put and high jump on Friday, and then he’ll close it out with the 60 meter hurdles, pole vault and 1,000 meter run on Saturday. The meet will close with the 4×400 meter relays at 5:40 p.m. CT on Saturday.

LSU enters the meet as the only team in America to be ranked top five on both the women’s and men’s side. LSU will be joined by a host of other top-20 squads in Fayetteville. The women’s competition features five additional top-20 teams as No. 1 Arkansas, No. 6 Kentucky, No. 7 Florida, No. 14 Alabama, and No. 17 South Carolina. The men’s side of the field is loaded as well with six teams ranked in the top 20 – No. 2 Texas A&M, No. 3 Florida, No. 6 Georgia, No. 13 Alabama, No. 18 South Carolina and No. 19 Ole Miss.

The defending SEC champions are Alabama on the men’s side (91 points) and Arkansas (108 points) on the women’s side. The Arkansas women have won the last four SEC indoor titles.

The LSU women own the most SEC indoor titles in conference history with 12 ahead of Florida’s nine and Arkansas’ eight. The Lady Tigers were last crowned SEC indoor champions in 2011. Head coach Dennis Shaver has led the women to two of those 12 titles with league crowns in 2008 and 2011. The men’s squad owns four SEC indoor titles with the last coming in 1990 when the Tigers were coached by Pat Henry. Rachel Misher is the only athlete on the travel squad to Fayetteville that has won a conference title indoors – she was the lead leg of 2018’s SEC winning 4×400 meter relay that clocked a 3:30.85 to win the title. LSU’s women finished fourth last year at indoors with 63 points, and the men’s squad took 11th (25 points).

Duplantis (4 p.m. CT) and Grey (5:30 p.m. CT) will both compete in their respective events on Friday afternoon with SEC titles on the line. Flournoy, Johnson and Farrow will all look to advance to the finals of their events on Friday, with the SEC titles up for grabs on Saturday. Gunnarsson will be in a fight for the title on Saturday at 3 p.m. CT with two Arkansas women as all three own the SEC leading and NCAA No. 2 marks of 4.51 meters (14’ 9.50”).

Johnson also owns the fourth-fastest 200 meter dash time in the conference with a season best of 23.08. Freshman sprinter Sha’Carri Richardson has been on the heels of Johnson all season long and she ranks third in the SEC in the 60 meters (7.20) and fourth in the 200 meters (23.08). JuVaughn Harrison will have a busy Friday afternoon as he will attempt to score points in both the high jump and long jump; the two events will overlap a bit and Harrison ranks as the second best high jumper in the league and fourth best long jumper conference wide. In the women’s high jump, Abby O’Donoghue currently rates as the third-highest jumper of 2019 with a season-best clearance of 1.80 meters (5’ 10.75”).

Jake Norris and Christian Miller have top five SEC marks in their respective events. Norris tossed the weight throw a personal best of 21.82 meters (71’ 7.25”) to rank fourth in the conference at last week’s LSU Twilight. Christian Miller’s season-best triple jump of 15.33 meters (50’ 3.50”) that he registered at the Tyson Invitational (Feb. 8) ranks No. 5 in the SEC. Junior transfer Mercy Abire’s personal best long jump of 6.13 meters (20’ 1.50”) ranks ninth in the SEC.

Two school records and 13 additional top-10 marks in school history have been registered in 2019. Mondo Duplantis (5.87m/19’ 3”) and Lisa Gunnarsson (4.51m/14’ 9.50”) are both the school record holders in the pole vault. Duplantis set his mark at the Bayou Bengal on Feb. 1, and Gunnarsson’s mark came at the Razorback Invitational in late January. Kortnei Johnson, for the second week in a row, registered a personal best in the 60 meters. She dashed down the straightway at the LSU Twilight with a time of 7.14 to rank fourth in program history and No. 2 all-time at the Carl Maddox Field House. In the men’s 60 meters, Akanni Hislop’s career-best time of 6.66 ranked him as the seventh-fastest sprinter in LSU history, and Jake Norris produced a monstrous throw of 21.82 meters (71’ 7.25”) to move up to No. 4 in the record book.

LSU currently has 12 individual athletes that own top-16 times/marks in the NCAA season. The No. 16 is so important because each athlete that ranks in the top 16 of his/her event earns a bid to the 2019 NCAA Indoor Championships. JuVaughn Harrison owns nationally qualifying marks in the long jump (NCAA No. 10) and high jump (NCAA No. 2), and on the women’s side, Kortnei Johnson and Sha’Carri Richardson are currently ranked inside the top 10 in both the 60 and 200 meter dash on the national level; Johnson’s season best of 7.14 in the 60 meters is the NCAA lead. On the relay side of things, the men’s 4×400 meter relay of Correion Mosby, Jaron Flournoy, Christian Boyd and Tyler Terry clocked the eighth-fastest time in the nation, a 3:06.34, at the Razorback Invitational on Jan. 26.

The women’s team checks in at No. 4 in the final USTFCCCA regular season rankings. The men are holding strong in the No. 5 spot in the USTFCCCA rankings for the third-straight week. Being ranked No. 4 and No. 5 in the USTFCCCA rankings, LSU is the only school in America to be ranked top five in both. FloTrack has the women ranked fourth and the men fifth.