Combo of New and Old Gives Softball High Hopes in 2019 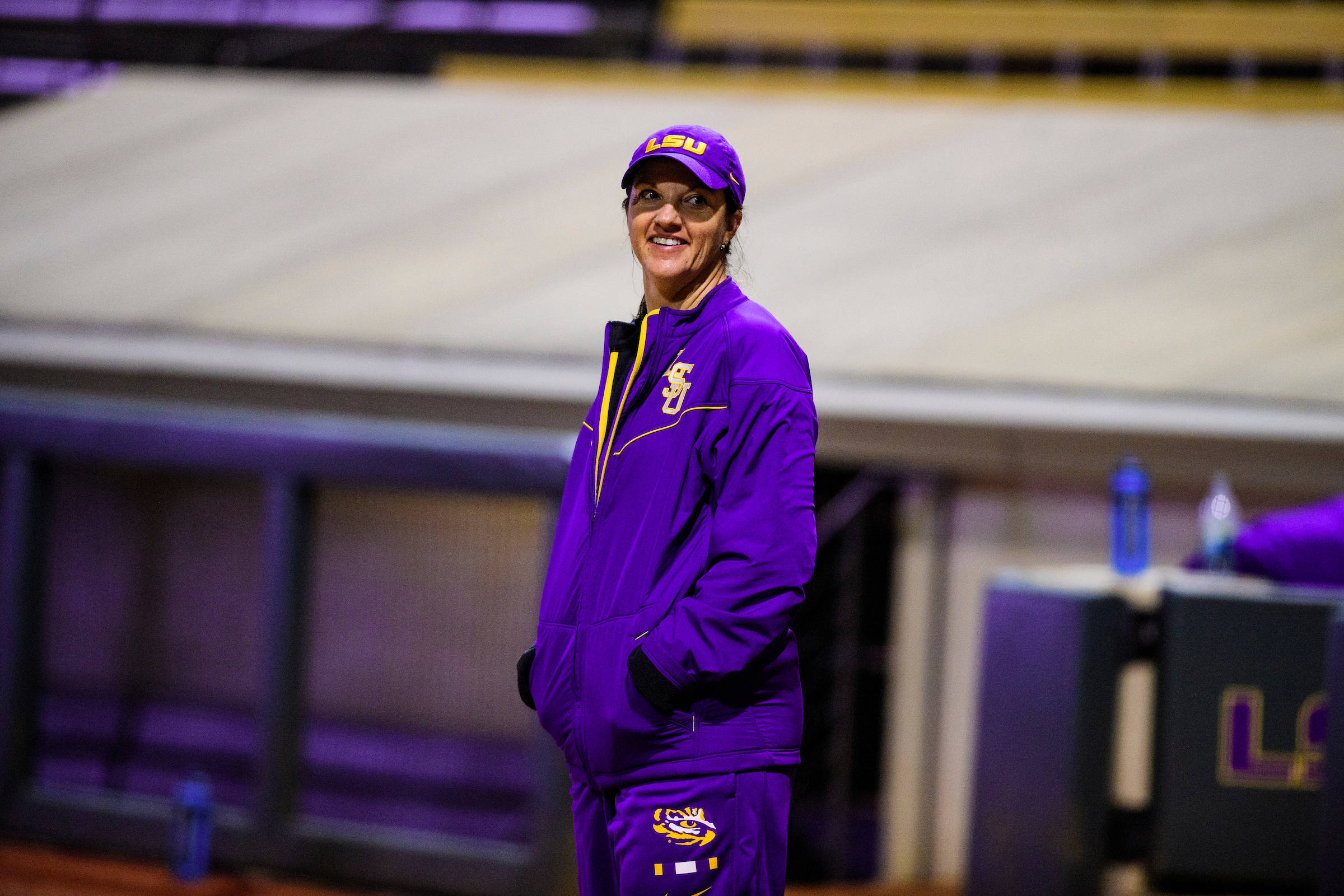 There’s a sense of novelty all around the LSU Softball program as the February 7 season opener approaches.

In right field, a 500-seat grandstand will make Tiger Park even more intimidating for visiting teams. In right field, a new HD scoreboard will offer live video and replays in-game to enhance fan experience, while the on-going construction of a 14,500 foot performance center points to the program’s bright future.

For now, however, Beth Torina’s focus is on the talent on the field, which is equal parts familiar and new.

“We are very new and very old all at the same time,” Torina said Tuesday at LSU Softball Media Day. “We return virtually the whole lineup, we have seven seniors, and we also on top of that have 10 newcomers. It’s an interesting dynamic.”

There’s no instruction manual for replacing a pair of All-Americans on the mound, as Torina will be required to do following the graduation of Allie Walljasper and Carley Hoover.

Torina will hand the ball off to a five-pitcher staff that is as diverse as it is talented.

“I love the staff we have,” says Torina. “They all fill a role that’s very different from each other. The combination of the five of them is a different look, which I like.”

The most experience returner is junior Maribeth Gorsuch, who bid her time for the last two seasons behind the dynamic duo of Hoover and Walljasper. In that time, Gorsuch picked up both critical experience on the mound – she went 9-3 with a 2.10 ERA in 80 innings in 2018 – as well as vital lessons as an understudy that have her ready to embrace the ace’s role.

“I’m excited about having a bigger workload and more of a responsibility,” Gorsuch says. “Last year helped a lot, getting experience behind Allie and Carley. I learned a lot about how to compete and how to throw to batters. And knowing what it takes. Both of them had what it takes to play in the SEC and lead a team to the Women’s College World Series.”

Gorsuch’s best outing came on March 2 against Illinois State, when she pitched 10 shutout innings, striking out 12 while surrendering a single hit. She also went six and a third scoreless innings against fifth-ranked Florida on April 28.

“I think Maribeth Gorsuch is going to do a really good job leading this team,” Torina says. “I think she’s prepared. I think she’s put in her time and waited. She had a really strong season last year, had some big SEC wins, some big performances against top teams. I think she’s ready.”

LSU also brings back sophomore Shelbi Sunseri, who pitched just 13.1 innings as a freshman while recovering from an injury. She did make her impact felt at the plate, however, hitting .261 and slugging seven homers in 36 games.

Joining that duo are freshmen Ali Kilponen, Shelby Wickersham, and Baylie Thornhill, all of whom Torina expects to pitch early in the season.

“Shelby Wickersham is from New Orleans, so she’s very familiar with our system,” Torina says. “She’s a little more polished and ready. Then you take Ali Kilponen on the other hand who’s barely had a pitching lesson, but is one of the most decorated players from her state of Colorado. She’s the ultimate competitor. They will bring very different looks. It’s been fun to have two people who are so excited to wear the colors, so excited to be in the bullpen and contribute any way they can.”

Gorsuch said she loves the way the freshmen have approached practice, eager to learn and ready to work. She broke down how each pitcher offers a different style, giving LSU’s bullpen a variety of looks.

“I’m a pretty diverse pitcher,” Gorsuch says. “I spin the ball a lot and move it in a lot of locations – up, down, inside, outside. Shelbi Sunseri throws gas, and she also spins the ball really well. Shelby Wickersham has tremendous spin and is very polished. And Ali Kilponen also throws gas, and she’s a competitor. The fact that we have all those different aspects in all of us is something we’re going to need.”

Torina knows her staff is young, but she plans to use them all in hopes that they’ll use their ample opportunities to improve drastically by season’s end.

Plenty of Pop, Too

While the Tigers have a fresh look on the mound, their lineup retains much of the pop that powered it a season ago.

Torina’s team returns 36 of 41 home runs hit last year to its lineup this season. That includes Amanda Doyle (8 homers in 2018), Michaela Schlattman (8), Shemiah Sanchez (7), and that group looks to be even more powerful this season.

Add in Missouri grad transfer Amanda Sanchez (32 career homers in three seasons), some big freshman bats, an offseason of work from assistant coaches Howard Dobson and Lindsay Leftwich, and Tiger Park could see its fair share of dingers this season.

“It appears our offense is really strong,” Torina says. “Our offense is doing really good things. We’ve had some great offensive years. This team is going to look to do that, to outswing people, outhit people. Howard and Lindsay have done a really good job this offseason making adjustments and trying to create a little bit of power, and we’re seeing that on a daily basis at Tiger Park.”

One innovation the team has utilized this offseason is the introduction of Blast Motion technology. By placing Blast Motion trackers on the players’ bats, the program can track bat speed, launch angle, and a number of other vital data points to maximize power at the plate.

“We’ve been changing our swing and how we approach different types of pitches,” says Sanchez. “Blast Motion has been helping us guide our numbers and see where we’re at and where we need to be.”

The offense also brings plenty of speed to the table, led by Aliyah Andrews, a preseason All-SEC pick who hit a team-high .329 a season ago and stole 42 bases. The younger sister of former All-American A.J. Andrews naturally draws comparisons to her sister – which is perfectly fine by her.

“What’s cool about Aliyah is I don’t think she minds being compared to her sister, because her sister was so phenomenal,” Torina says. “I think it’s an honor for her, because she appreciates what her sister did and how great her sister is.”

Defense should also be a strength for Torina’s team, headlined by senior shortstop Amber Serrett. The three-year starter is the heartbeat of the Tigers in the field, a player who Torina can’t believe is already entering her final season.

“She’s one of the ones when you talk about her name and put senior next to it, it makes me sad, because you think, ‘We’re running out of days to watch someone like her play,’” Torina says. “We call her The Brains. She really is the field general out there. She does so many things for us on the field, and we’re better when she’s standing out there.”

Torina hasn’t settled on a lineup yet. That’s something she’ll tinker with as she works in the new players with the returners, as the Tigers tackle a schedule that features 36 games against NCAA Tournament teams from last season and 30 against teams in the 2019 preseason top 25.

The goal at the end of that finish line is simple, perhaps best summed by Amanda Sanchez. A graduate transfer, her situation mirrors that of her team perfectly: experienced and new, all at the same time.

“This is probably the best coaching staff to get the most out of me, to squish every possible thing that’s left for me to get better,” she says. “LSU has that tradition of going far, and for my last year, that was my goal. I felt like here, I had the best shot of getting to Oklahoma City.”