The Strategic Plan That Vaulted LSU Gym to New Heights 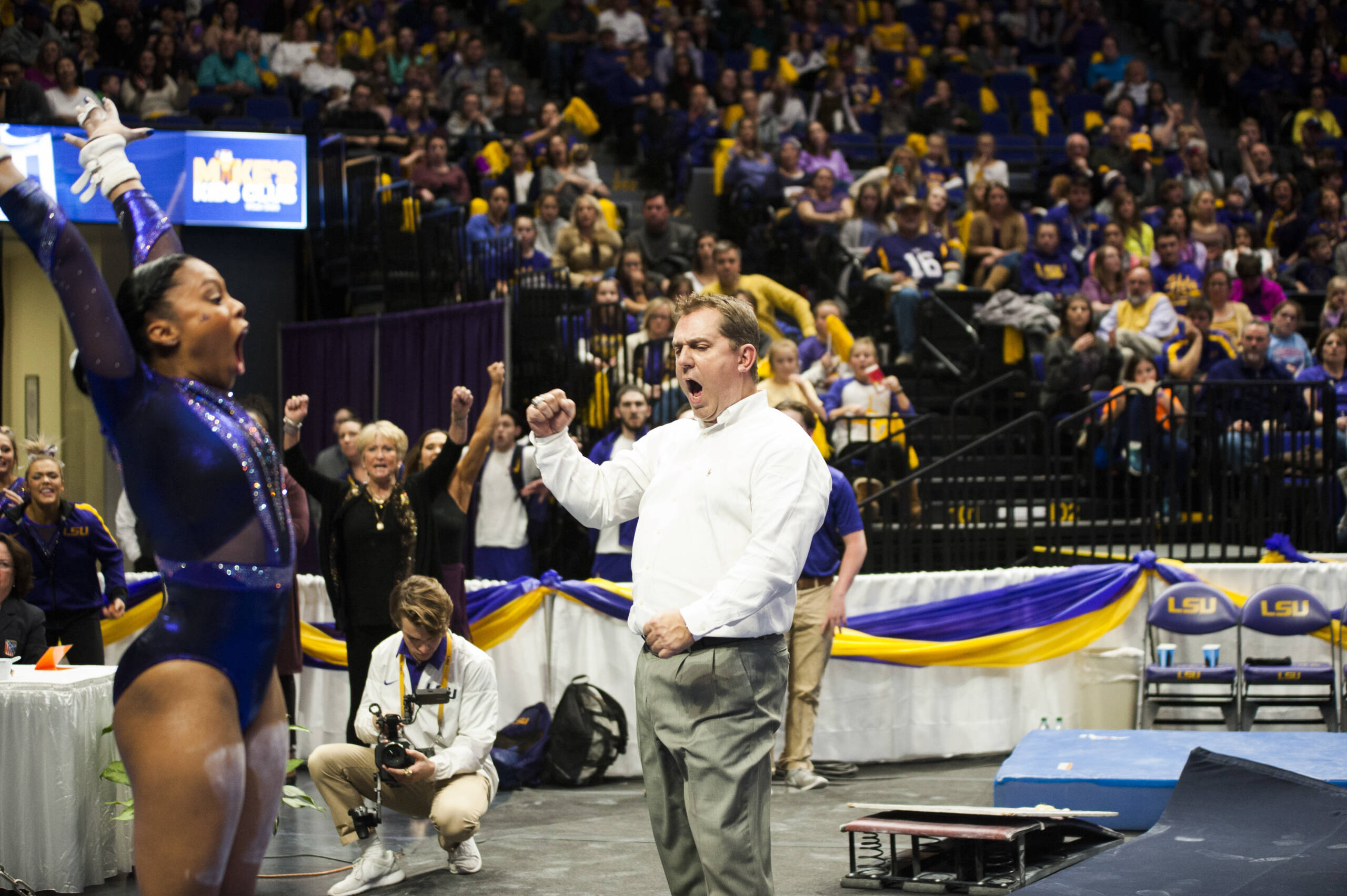 At his core, Jay Clark is a recruiter.

In nearly three decades in college gymnastics, Clark – the associate head coach for LSU Gymnastics – has convinced dozens of star athletes to compete for his programs. He’s landed Olympians and national champions, convincing blue chips and mining hidden gems alike and helping to turn them into collegiate stars.

But when he arrived in Baton Rouge in 2012 to partner with longtime head coach D-D Breaux at LSU, Clark quickly realized he’d walked into the biggest recruiting challenge of his life.

This time, his target wasn’t a powerful vaulter, an electric tumbler, or a champion all-arounder.

Instead, his job was to help sell an entire city on the power, promise, and potential of gymnastics.

Six seasons, thousands of season tickets sold, and dozens of packed PMACs later, a vision once shared by two coaches has manifested itself exactly as they’d imagined.

Its genesis: a blueprint for organic growth combining grassroots marketing, investment of time and money from the athletic department, data collection and analysis, and the hardest ingredient of all – winning.

“The potential was always here,” Clark says of the growth of gymnastics at LSU. “D-D just needed a partner. We just focused the efforts and created a strategic plan.”

Breaux has said it for years: a consistent message is a powerful thing.

It’s even more powerful when the number of messengers doubles.

That’s what happened when Clark joined Breaux’s staff in the summer of 2012, attracted to LSU by its potential to develop into an annual powerhouse in college gymnastics. In Clark, Breaux saw not only an experienced, proven coach and recruiter whose teams had excelled at the highest levels.

She also saw a marketer and messenger who could help her carry the torch for a sport she’d been shouldering for decades in Baton Rouge.

“Before Jay got here, at his previous university, he had a tremendous amount of success through a lot of years in season ticket sales and marketing and promoting their program,” Breaux says. “A lot of things we were doing here, I was doing alone. Then, all of a sudden, Jay came in, and the message was the same, but two people with the same message is powerful, and it just began to have momentum and move forward at a faster pace.

“Jay got here, and all of a sudden, it was like, ‘This guy’s saying what she’s been saying.’”

The message was simple enough. Breaux condenses it to two words: Holy Cow! It combines the visual spectacle of the sport – world-class athletes performing incredibly difficult movements with power and grace – with the affordability of a meet, which Breaux is happy to tell you is cheaper than a movie.

It was just about getting that message out. It was about figuring out where, in the ouroboros that is college sports, to get started.

“That was the first thing that set an alarm off in our head,” Clark said.

The solution, however, was simple: collect data. With the help of the ticket office, the athletic department, and Mike Smith, the Voice of LSU Gymnastics, the program hired a firm to collect 20,000 addresses that fit within a specific demographic criteria – families with children under 18 years old – in order to shift from a strategy of retention to a strategy of growth.

Another vital component was improving the in-arena experience. During meets, Clark, Breaux, and the entire staff would take note of what went well and what needed improving. On road trips, they’d borrow ideas they liked and improve on them.

The changes were tangible. Breaux is big on tradition, so she had the band start coming to meets and playing the alma mater afterward. They tweaked everything from floral arrangement and drapery color to stage lighting and the timing of pre-meet introductions.

“They get that far down into the details,” says senior associate athletic director Mark Ewing. “They’re very attentive to everything. And if there needs to be a correction, they say something.”

After every meet, the coaching staff would meet with the athletic department, with representatives from ticket sales, event management, marketing, and anyone else with a stake in the show to improve every detail. They mapped out calendars and set tangible markers each year. They ramped up the program’s presence on social media and invested in video production and distribution, pumping out in-house content for fans to connect with the program in new ways. They moved up deadlines for printed materials so they had more to hand out in the public. They continued to connect in the community, guest hosting at restaurants on Thursday nights before meets and meeting with families across the city at various events.

The efforts increased, as did the collective buy in. still, like an athlete on the beam, everyone made sure to take a balanced approach.

“Make sure you don’t overexpose or underexpose,” Clark says. “You can’t have a lull, but you can’t put something out every five minutes, because it’s hard to maintain that pace, and people drop off when you’re inundating them at all times.”

All the while, Breaux and Clark’s passion became contagious – not just across the city, but also inside the athletic department.

“D-D and Jay spend time on it and pride themselves on it,” Ewing says. “They care, and since they show they care so much, you get buy in from everybody else.”

Florida, 2015. That’s when the permanently-shining light bulb residing inside the skulls of Breaux, Clark, and the core of the program went off for everyone in the LSU community.

That night, 12,217 fans packed the PMAC to watch No. 3 LSU take down No. 2 Florida. The attendance that night surpassed the previous program record of 8,574 – an increase of more than 40 percent.

“I’m not sure they understood it could be done in gymnastics at the time, because most schools don’t,” Clark says. “They see football, basketball, and baseball, but they don’t have the same vision for gymnastics. Once we got our people to believe that in a city of 800,000 people, we could sell that building out and there’s no reason to think otherwise, it took off from there and hasn’t stopped growing.”

“It’s been amazing to see all these people get on board with the vision that D-D’s had for so long and bring it all to fruition,” says Clark. “I don’t know if it’s anything specific I did other than try to take the energy that was operating in silos and try to help organize it.”

That’s why for as much credit as the coaching staff deserves, Breaux knows all the in-house efforts needed support from the top – which is exactly what she got.

“You have to couple that with the commitment Joe Alleva and Mark Ewing had and the belief and confidence they had in the product we were putting on the floor,” Breaux says. “It’s cause and effect.”

Just as the work that went into transforming a successful program into a performance and marketing powerhouse was the result of shared vision and effort, so, too, does the credit spread across campus.

“The buy in with people who come, they see it’s a great family event, and that’s what we market it as,” Ewing says. “People know, on a Friday night, that’s a great place to take your children to have a good, affordable experience, and it’s an hour-and-a-half, two hours.

“It was a lot of hard work, but I think they’ve found their audience.”