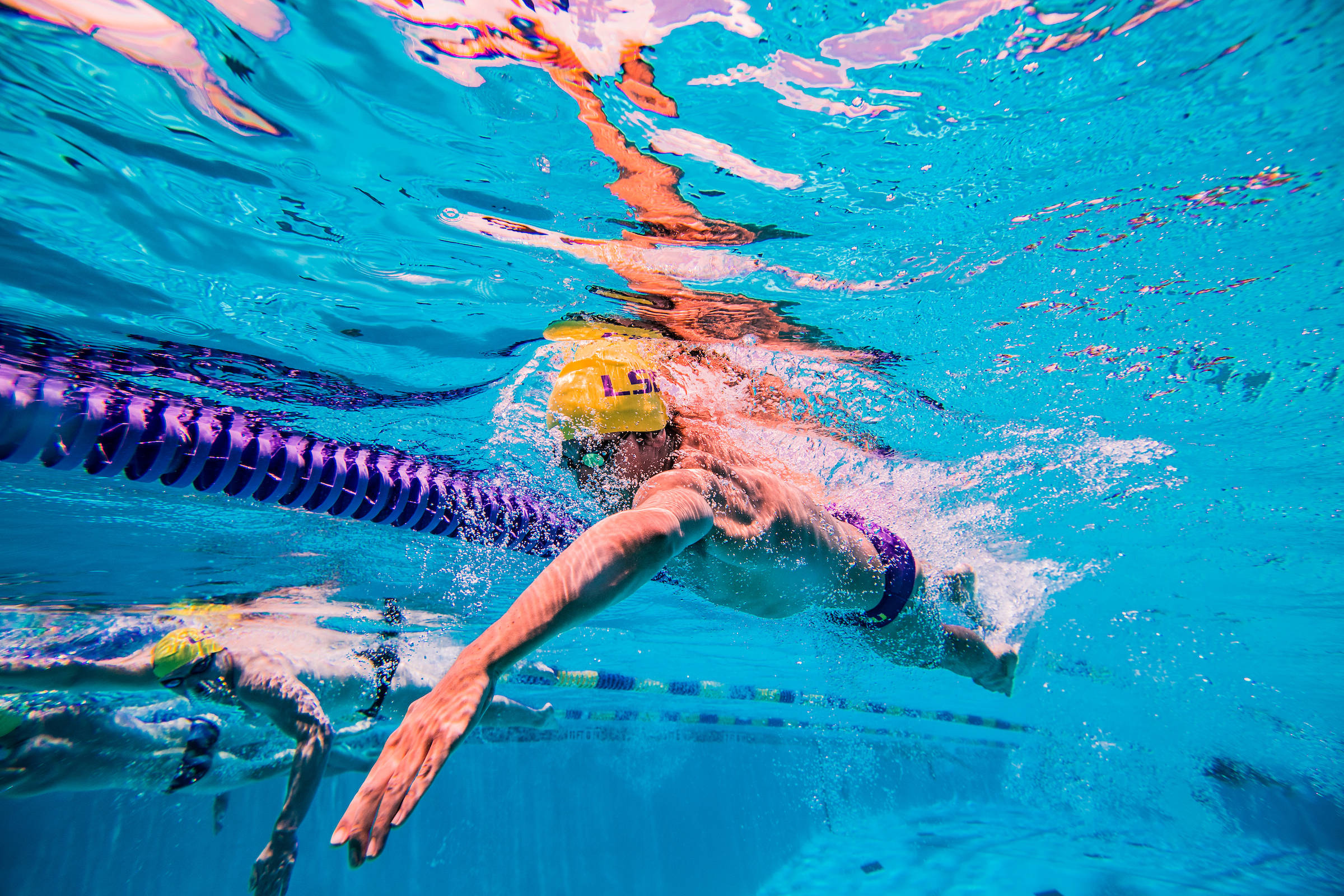 BATON ROUGE– The LSU Swimming and Diving team is set to host Incarnate Word and Delta State on Saturday, January 12 at the LSU Natatorium. The morning will begin with the Senior Tribute at 10:45 a.m. CT and the meet will follow at approximately 11:00 a.m. CT

The Tigers will be back in the pool for the first time since the Art Adamson Invitational which concluded on November 19.

“Our preparation over the past six weeks has been outstanding,” said LSU swimming head coach Dave Geyer.  “I’m excited to have us racing again.  It’s just one more step into our final stage which is championship time, but it’s an important step.”

On the women’s side, Haylee Knight will look to continue her dominance as the senior currently ranks tenth in the conference in the 50-yard freestyle, and fifth in the 100-yard freestyle.

Summer Spradley will also be back in action.  The senior ranks eighth in the league in the 100-yard breaststroke with a time of 1:00.41.

The diving team will be back in action just a week after competing in the Georgia Diving Invitational.

Juan Celaya-Hernandez won both springboard events last weekend with a scores of 382.90 and 428.50 on the one-meter and three-meter, respectively.

Aimee Wilson and Lizzie Cui will compete on the women’s side.  Last week in Athens, both Cui and Wilson had two top-five finishes on the springboard.  On the platform, Wilson finished in seventh place and Cui finished in ninth place.

“Coming off the Georgia Diving Invite, we move into a training and competition cycle preparing us for our championship season,” said LSU head diving coach Doug Shaffer. “It’s all about details and fine tuning our lists while continuing to work on our weaknesses.  This Saturday is also an opportunity to say thanks and honor our seniors who have all made an impact on our program in their collegiate journey.”

On Saturday, 17 seniors will be recognized as they prepare to compete in the LSU Natatorium for the final time.

“We are excited to honor our 17 seniors and their commitment not only to the program but also their commitment to representing this great institution here at LSU,” said Geyer. “It’s always an emotional day with their friends and family but they are good at hitting that switch to get ready to compete.”

Will is a three-time letter winner who represented the Tigers at the last 3 SEC Championships.  The Knoxville, Tennessee Native set many personal bests during his time at LSU including a time of 44.67 in the 100 Freestyle, 48.49 in the 100 Backstroke, and a 1:48.66 in the 200 IM.  At the 2016 & 2017 SEC Championships, he was a member of the 800 Freestyle Relay’s, and in the summer of 2016, he qualified and represented LSU at Olympic Trials.  Will plans to graduate in May with a degree in Coastal Environmental Science.

One of the most decorated divers in LSU history, Lizzie is a seven-time NCAA qualifier. The school record holder in the 3 meter springboard, Lizzie was named an NCAA First Team All-American on the three-meter springboard in 2017, an NCAA All –America Honorable Mention in 2016 for the same event, and an NCAA All –America Honorable Mention in 2017 and 2018 on the one meter springboard as well. Lizzie captured SEC Medals every year at the Championships, and has been named SEC Diver of the Week two times in 2017-2018.  The New Zealand native is set to graduate in May with a degree in Mass Communication and a minor in business.

Tyler is a three-time letter winner for the Purple and Gold.  He has been a part of many great moments as a Tiger that include being a member of Freestyle Relays at the last 3 SEC Championships, as well as turning in the 10thfastest time in school history in the 200-yard freestyle with a time of 1:37.27 at the 2018 SEC Championships. Tyler was also a participant at the 2016 Olympic Trials for the Tigers. Majoring in Information Systems and Decision Sciences, Tyler plans to graduate in May.

Tennyson Henry is a three-time letterwinner for the Tigers.  The St. Charles Missouri native is in the midst of an outstanding senior season having hit new personal bests in the 100-yard free with a 50.68 at the Art Adamson Invitational. She followed that performance up with a 4:50.56 in the 500-yard free to establish herself as the 9thfastest in school history in that event. Tennyson will graduate in May with a degree in General Business & Minor in Personal Investing.

A three-time letter winner, Harrison currently holds the school record in the 200-yard butterfly with a time of 1:42.84 from the 2018 SEC Championships. In addition, Jones set a personal best at the championships in the 100-yard fly with a time of 46.69 seconds to propel him to sixth on the all-time list. The 2018 Brad Davis SEC Post Graduate Scholarship Award Winner has plans to graduate in May with a degree in Kinesiology.

Lia is a two-time letterwinner for the Purple and Gold.  During her junior season, Lia set a personal best with times of 24.19 and 51.86 in the 50-yard and 100-yard freestyle.  She followed that performance up with personal best times at the 2018 SEC Championships in the 100-yard and 200-yard butterfly with times of 54.60 and 2:02.83, respectively.  Lia is majoring in Accounting and plans to graduate in May.

A three-time letterwinner, Haylee has had a lot of success for the Purple and Gold.  At the 2017 SEC Championships she captured a 7thplace finish in the 50 freestyle with a time 22.28, good for 4thall-time at LSU. Haylee is peaking her senior year also having set a personal best in the 100-yard freestyle with a time of 48.04 at the 2018 Art Adamson Invitational which ranks second on the LSU All-Time list, along with posting a 52.17 in the 100-yard Butterfly, good for 6thall-time. The 2016 Olympic Trials Qualifier is majoring in Sports Administration with a graduation date set for May.

Rileigh, a Florida native, is a three-time letterwinner for LSU.  She scored a personal best on the three-meter springboard with a score of 314.50 at the 2018 Auburn Diving Invite to finish in fourth place.  She took home the silver and bronze on the one and three-meter against Texas A&M.  Rileigh closed the 2018 season out with 19th-place finishes on both the one and three-meter at the SEC Championships. The three-time SEC Academic Honor Roll member is majoring in Mathematics and plans to graduate in May.

Alarii is a two-time SEC Academic Honor Roll member. He is featured many times on the all-time list having posted the sixth-fastest time in school history during his freshman season in the 200-yard fly at the SEC Championships. He also sits number nine all-time in the 200-yard IM and eighth all-time in the 400-yard IM. The 2016 Olympic Trials Qualifier will be graduating in May with a Degree in Petroleum Engineering & minor in Geology.

Matt has spent three years as part of the LSU Diving Team.  The Cypress, Texas native holds the ninth-best score in school history on the one-meter springboard and the fourth-best time on the three-meter springboard with scores of 364.20 and 399.45, respectively.  Matt is an SEC Academic Honor Roll Member and plans to graduate in May with a degree in Renewable Natural Resources.

Gabrielle has been a focal point for the Tigers in Butterfly swimming since day 1 and was an Olympic Trials Qualifier in 2016 in both the 100 & 200 meters. Consistently an event winner for the Tigers in dual meets over the last 2 seasons, Gabi landed 4thall-time in the 200-yards Butterfly with her performance at the 2017 SEC Championships in a time of 1:57.86.  Gabrielle is a member of the SEC Academic Honor Roll after her accomplishments in the classroom, is a three-year letter winner majoring in Marketing with a minor in Communication Studies, and she will graduate in May.

Mitchell is a three-time letter winner for the Tigers who last year posted a lifetime best in the 200-yards Breaststroke at the SEC Championships.  A true scholar, Mitchell earned Google Cloud Academic All-America Third Team Honors during his junior season and was also named an Astronaut Scholar by the Astronaut Scholarship Foundation.  Petras was the winner of the 2017-2018 Chevron Leadership Academy Scholarship and the Joe and Kim Reid Scholarship.  Mitchell is majoring in Petroleum Engineering, with minors in Geology & Energy and plans to graduate in May.

A three-time letter winner and an NCAA Championship qualifier, Matthew has been a steady force for the LSU Diving Team. Currently sits with the seventh-best score in school history on the three-meter springboard with a score of 389.55 and fourth all-time on the platform with a 402.70.  He set a new personal-best on the one-meter against Florida with a score of 338.63.  Matthew plans to graduate in May with a degree in Kinesiology.

The 3-time letter winner for the Tigers was named Newcomer of the Year during his freshman season after smashing the school record in the 200-yards backstroke and finishing 8that the 2016 SEC Championships.  He still holds the school record in the 200-yard backstroke with a time of 1:42.77, is the 4thfastest all-time at LSU in the 200-yards IM, and this season set a personal-best time of 48.14 in the 100-yard backstroke at the 2018 Art Adamson Invitational as well.  Thomas was named to the 2017-2018 SEC Community Service Team, is a member of the SEC Academic Honor Roll, and was awarded the Boyd McWhorter Post Graduate Scholarship. Thomas will graduate in May with a degree in Information Systems and Decision Sciences with a minor in E-Commerce Engineering

Summer is a three-time letter winner who has made enormous strides during her career with the Tigers. A consistent performer in Breaststroke and sprint freestyle events, Summer has put herself on the LSU top-10 performances list in 3 different events. She is currently the 3rdfastest 200-yards Breaststroke performer, 4thfastest in the 100-yards Breaststroke, and the 9thfastest 50-yards freestyle performer in program history. Summer is majoring in International Trade and Finance with a minor in Communication Studies and plans to graduate in May.

Lauren is a three-time letter winner and currently serves as captain for the Tigers.  An ever-present in IM and Breaststroke events during her 4 years, Lauren is finishing her career with a flourish having recorded four personal bests at this seasons Art Adamson Invitational in the 100 and 200-yard breaststroke, as well as in the 200 and 400-yard individual medley respectively. Lauren is majoring in Marketing and minoring in Communication Studies and plans to graduate in May.

A three-time letterwinner for the Purple and Gold, Kate has set the highest of standards over her time with the Tigers in both the classroom and in the pool. A regular member of the SEC Academic Honor Roll, Kate has battled back from 2 shoulder surgeries to be an integral part of sprint freestyle and medley relays at the SEC Championships. She has registered best-times in the 100 and 200-yards Backstroke, as well as in the 50 and 100-yards freestyle, and also posted the 6thfastest time in school history at the 2017 SEC Championships in the 100 Backstroke. The Boyd McWhorter Post Graduate Scholarship Award Winner will graduate in May with a 4.0 in Nutrition and Food Science and a minor in Agriculture.