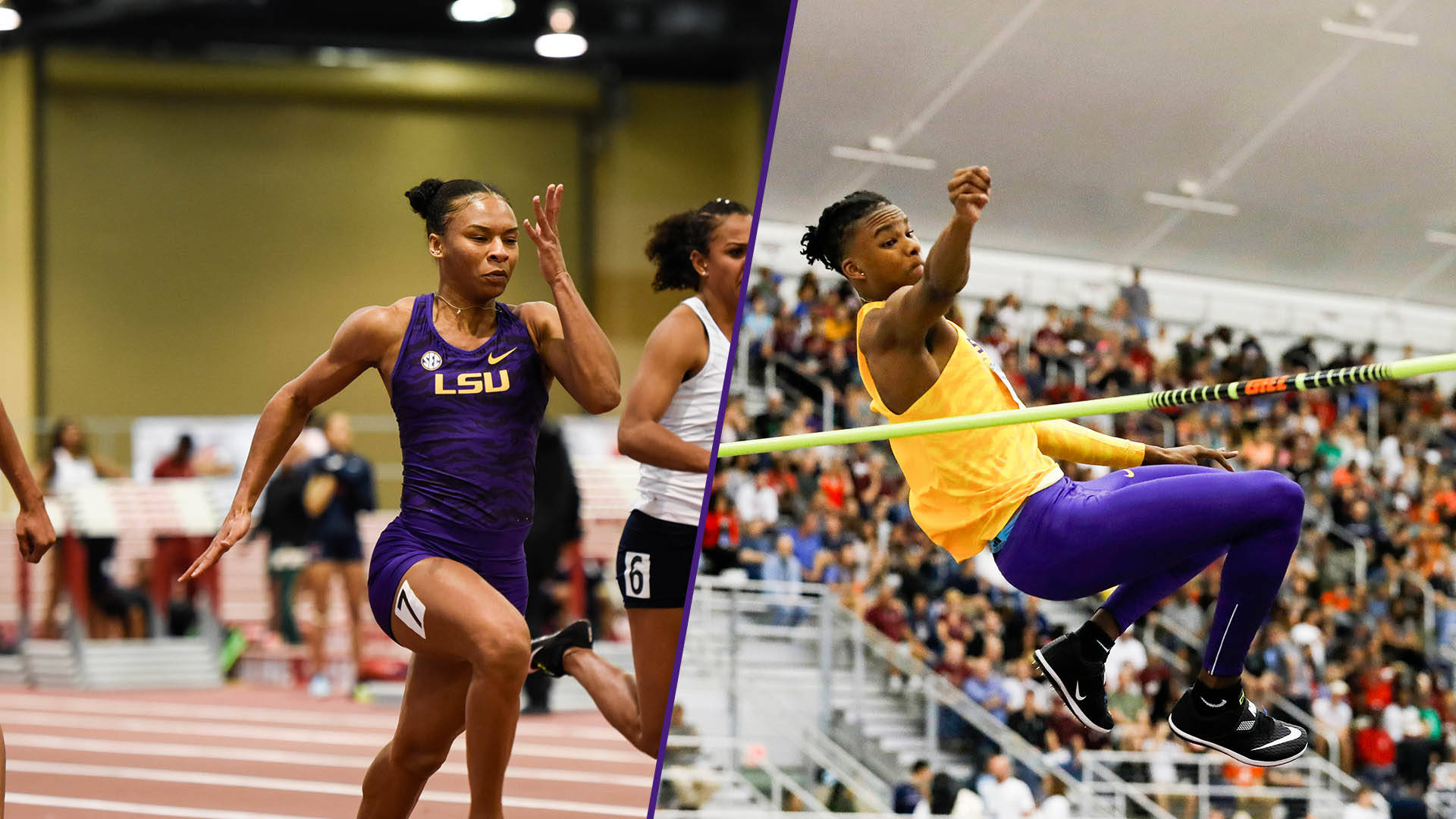 Baton Rouge, La. – The LSU track and field team will open up its 2019 slate on Saturday at the UAB Vulcan Invitational in Birmingham, Ala at The CrossPlex. Fans are encouraged to follow @LSUTrackField on Twitter for the latest updates throughout the meet.

The Tigers are led by 15th-year head coach Dennis Shaver and return a number of All-Americans for 2019’s squad. LSU will compete at nine different regular season indoor meets before the SEC Championships are hosted in Fayetteville, Ark., at the Randal Tyson Track Center on Feb. 22-23. All those meets will lead up to a return trip to The CrossPlex in early March (8th and 9th) for the 2019 edition of the NCAA Indoor Championships.

The meet begins for the Tigers on the track at 9:15 a.m. CT with Amber Desselle in the 5,000 meter run. The Lady Tigers have six women (Zakiya Denoon, Brittley Humphrey, Kortnei Johnson, Kiya Oviosun, Jurnee Woodward and Shayna Yon) scheduled to line it up in the 200 meter dash that begins at 4 p.m. CT. The long jump crew of Jace Attuso, Rayvon Grey, JuVaughn Harrison and RC Walbrook will enter the sand pit at 10 a.m. CT.

LSU returns five individual scorers (three women, two men) and two relay teams from 2018 that scored points at NCAA Indoor Championships. Senior Kortnei Johnson doubled up and scored in the 60 meter dash (seventh place) and 200 meter dash (fifth place) a year ago. She was joined in the final of the 60 meters by Cassondra Hall, who wound up taking eight place at the national meet; Hall is primed for a successful 2019 campaign. Jaron Flournoy had the highest finish of the men’s squad at the 2018 indoor national meet with a fourth-place showing in the 200 meter dash; Flournoy has earned seven All-America honors during his first three years in Baton Rouge. A pair of hurdlers, Tonea Marshall and Damion Thomas, also put points on the board for the Purple and Gold at the 2018 indoor national meet. Marshall, a rising junior, finished seventh and then-freshman Thomas placed eighth in his first-career indoor national meet. Both of the 4×400 meter relays return three legs of their point-scoring relays from 2018. Rachel Misher, Hall, and Zakiya Denoon return on the women’s side, and the men’s threesome of Correion Mosby, Flournoy and Jahnoy Thompson will assuredly factor into the men’s relay this season.

Ten athletes who set top-10 marks in school history in 2018 are back in action this indoor season, many of whom factored into the national meet for LSU last season. JuVaughn Harrison used a personal best leap of 2.22 meters (7-3.25) at the Tyson Invitational last year to register the third-best clearance by an LSU high jumper in school history last February.

Jaron Flournoy and Correion Mosby became two of the fastest 200 meter dashers in school history last season with special performances at postseason meets. Flournoy registered the fifth-fastest time (20.55) in school history at the NCAA Championships and Mosby cracked the top 10 with a time of 20.70 at the SEC Championships. Kortnei Johnson worked her way into the top 10 in two different events, the 60 meter dash (7.18/No. 6) and 200 meter dash (22.88/No. 9). Damion Thomas’ career best 60 meter hurdle time (7.75) came at the Razorback Invitational for the sixth-fastest readout in program history. Fellow hurdler Tonea Marshall registered the seventh quickest clocking in school history with a 8.04 at the Tyson Invite.

Abby O’Donoghue’s career-best clearance of 1.81 meters (5-11.25) in the high jump ranks as the sixth highest in LSU history, just a quarter of an inch below her mom’s (formerly Kelli Flynn) career best clearance of 5 feet, 11 and a half feet that she set while competing for LSU in 1987. Jake Norris, primarily a hammer thrower during outdoor season, picked up the weight throw for the first time in his life and notched the seventh-best mark in school history with a heave of 20.48 meters (67-2.25); his personal best mark came at the SEC Championships and scored points for the Tigers. Cassondra Hall (No. 9/60 meter dash/7.21) and Rachel Misher (No. 10/400 meter dash/53.04) also registered top-10 times in 2018 during the indoor season.

The United States Track & Field and Cross Country Coaches Association announced its preseason rankings on Thursday morning. The women enter the season in the No. 7 slot, while the men check in at the No. 17 position. FloTrack’s preseason rankings slot the LSU women in the No. 4 spot, and the men are not too far off with a ranking of six.

The preseason watch list for the 2019 edition of The Bowerman was released on Tuesday and Mondo Duplantis was the only freshman to be named to the men’s list. The appearance on the most prestigious list in collegiate track and field is the fourth all-time by a men’s athlete at LSU. Duplantis joins the likes of previous honorees Walter Henning, Vernon Norwood and Nethaneel Mitchell-Blake. The Bowerman recognizes the top 10 collegiate male and female athletes around the country and the honor is awarded annually to the most outstanding athlete each collegiate season every December.

The LSU track and field team had a number of athletes compete on the national and international stage last summer and they will look to carry that momentum created by some special performances. The trio of Mondo Duplantis (pole vault), Damion Thomas (110 meter hurdles) and Jake Norris (hammer throw) claimed world titles at the IAAF U20 World Championships in Finland. In addition to their gold medals, Lisa Gunnarsson, a sophomore transfer from Virginia Tech, claimed a silver at the world junior meet in the pole vault and JuVaughn Harrison garnered bronze in the high jump.

Jahnoy Thompson burst onto the scene at the Jamaican Championships as well and he claimed the 200 meter title on the senior level with a personal-best readout of 20.21 seconds.

The Tigers boast a bevy of newcomers that could make an impact on the national stage right away. Two that come to mind immediately are Mondo Duplantis and Lisa Gunnarsson – both pole vaulters. Duplantis’ indoor career best clearance of 5.88 meters (19-3.50) is an inch and a quarter away from the collegiate record, and Gunnarsson has already scored on the NCAA level as a freshman for Virginia Tech with a fourth place finish indoors and third place showing outdoors.

Raymond Kibet comes to LSU via Tulane where he competed for the Green Wave. A 2016 Rio Olympian in the 400 meters, Kibet will have a chance to be a member of LSU’s elite 4×400 meter relay and will look to score individually at the NCAA Championships for the first time in his career. Dylan Peebles, a sprinter via North Carolina State University, comes to Baton Rouge with two ACC titles to his name and he has competed at the NCAA East Preliminaries. Tyler Terry owns three NJCAA national titles after competing at Hinds Community College the past two seasons; in 2017 at the NJCAA national outdoor meet he won natties in the 400 meter dash, 4×100 meter relay and 4×400 meter relay.

On the women’s side, Mercy Abire placed 13th in the long jump at the 2018 NCAA Outdoor Championships; she transfers in with two years of remaining eligibility from Oral Roberts. Two freshmen sprinters, Sha’Carri Richardson and Ariyonna Augustine, come into their debut seasons with some fast times. Considered the No. 1 ranked sprint-recruit in the class of 2018, Richardson racked up eight state titles in Texas while she sprinted for Carter High School out of Dallas. Augustine won two prep titles in the state of California during her junior season in 2017, and she owns personal bests of 7.50 (60 meters) and 11.56 (100 meters).