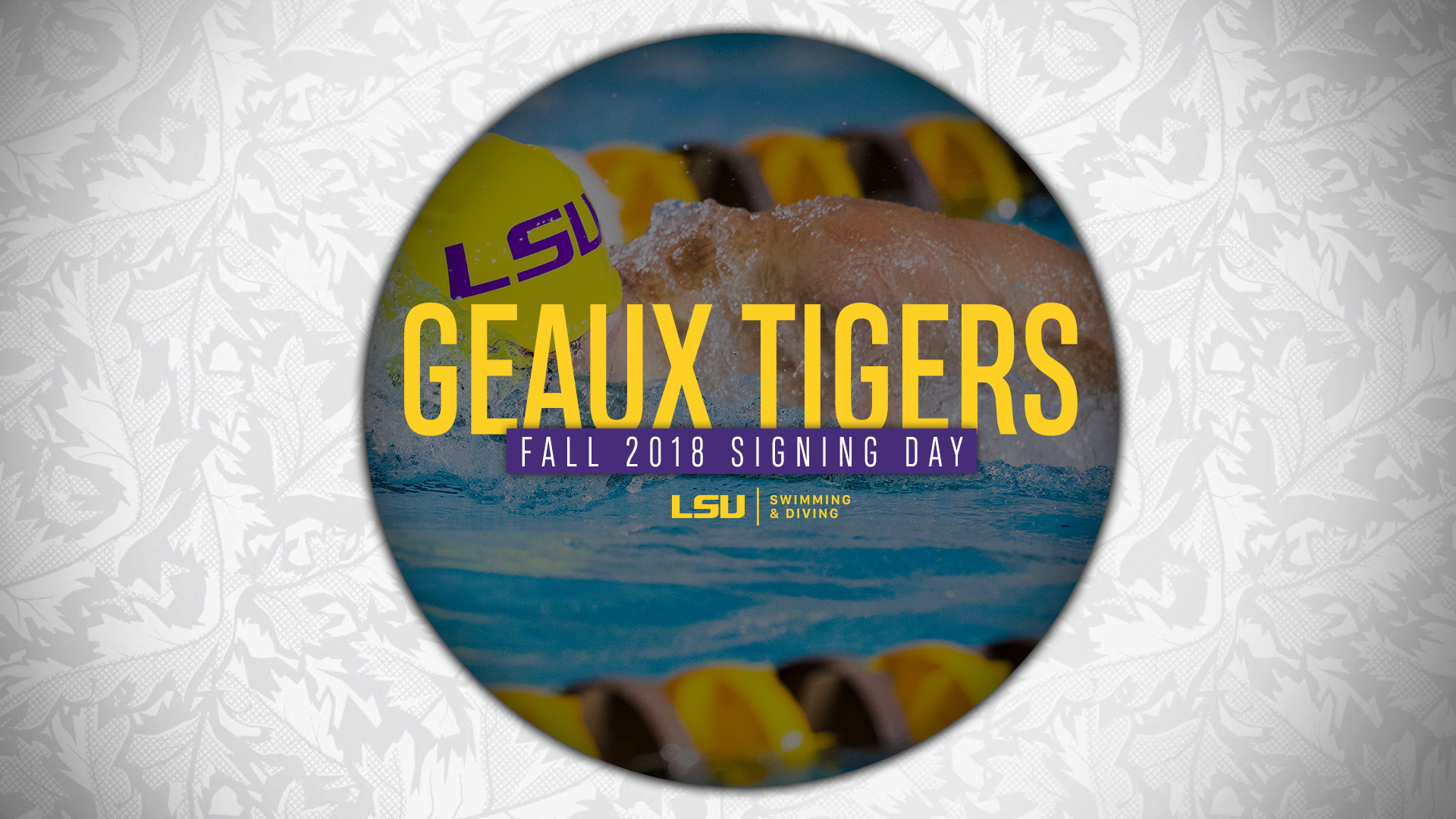 The women’s swimming class is set to make an immediate impact for the Tigers.

“For the larger part of the class, this is a group of women that have been committed since sometime during their junior year,” said swimming head coach Dave Geyer. “There was an immediate recognition that LSU was the right place for them for their education and development as a swimmer. While we are looking to still add to this class from a depth and need position, we really crossed everything off of our list. This is a class with tremendous depth and talent and most importantly a HUGE love for LSU.”

Summer Stanfield highlights the class and is the younger sister of former LSU swimmer Stacey Stanfield. Ranked ninth in the state of Florida and 74th overall, Stanfield is extremely versatile, swimming freestyle, backstroke and butterfly, as well as the individual medley. The Jacksonville, Florida, native swims for Storm Swim Club. At the FHSAA 3A State Championships, Stanfield was a finalist in the 200 IM and 100 back in 2016 and 2017, and went on to win state titles in the 200 IM and 100 fly in 2018.

“I can’t express how excited we are to have a second Stanfield here at LSU,” said Geyer. “We know that with Summer we are getting a great family that has passion and support for our program. Summer is really untapped in her potential and from a dual-meet perspective can compete in over half of the events. She will be a valuable asset in that manner as we try to see where her biggest potential will be in the water.”

Jolee Liles, like Stanfield, can swim a variety of events. Hailing from Crawfish Aquatics in Baton Rouge, Liles figures to have an immediate impact. Ranked second in Louisiana and 144th overall by collegeswimming.com, Liles won the LHSAA Division 3 State Championships in the 200 IM and 500 free in 2016 and 2017.

“From the first opportunity she had, Jolee was all LSU,” said Geyer. “If you look at the in-state athletes that have made the decision to stay in state and represent LSU and in the state there has been a tremendous amount of success from them not only in their personal development but in the SEC and even at the NCAA level. Jolee has that drive and determination to keep that going and we look forward to having her wearing purple and gold. Similar to Summer, she has the ability to swim a plethora of events for us in dual meets with her 200’s being her strongest events at this time.”

Olivia Taylor will also be looking to score at SEC’s as a freshman. Taylor swims both freestyle and butterfly, and is a native of Ocala, Florida as a member of YMCA of Central Florida. Ranked 20th in Florida and 213th overall by collegeswimming.com, Taylor was a three-time finalist at the 2016 Florida Senior Championships in the 50-yard free, 50-yard fly, and 100-yard breast.

“Olivia is one that caught our eye racing while we were out recruiting,” said Geyer. “She is a competitor and that is something that can’t be taught. Her short-distance racing is something we were definitely looking at filling with the departure of this senior class. There will be some development that needs to occur but with what we have seen in her training and competition, we feel that learning curve will be quick and she will be competing at the SEC-scoring level her freshmen year.”

Emily Pye joins the Tigers as the sixth-ranked swimmer from Tennessee by collegeswimming.com. Pye fills a need at breaststroke and currently swims for Tennessee Aquatics, a program that has produced a number of Division I swimmers. The Louisville, Tennessee, native is a 2018 USA Swimming Scholastic All-American and a three-time finalist at the 2018 Southeastern Long Course Championships.

“Emily comes to us from a program that has developed a number of Division I swimmers and from her Coach Larry Hough that I have personally known for over 15 years,” explained Geyer. “His feedback for her is that she will continue to develop and can excel at the collegiate level. Breaststroke was another target for us for this class and she will start off helping us with depth in those events.”

Katarina Milutinovic rounds out the women’s swimming class and will be a spring enrollee that could provide immediate help for the Tigers. A member of RegMosco Swim Club in Moscow, Russia, Milutinovic is the lone international signee of the women’s class that could help the Tigers this season.

“Katarina will be joining us this spring and could bring some quick pop to our sprint relays, if we choose to start her eligibility this year,” said Geyer. “In addition to Olivia, she is a key addition to maintaining depth for our sprint relays and was a great pick up on the international side this year.”

The men’s swimming class may be small, but it certainly addresses the needs for Geyer.

“I am happy with this small group of men we have and know that there will be one or two more that we add into this class over the next couple of months,” said Geyer. “With this class we really hit our needs in events and depths. With the graduation of our butterfly depth we needed some guys that can fill that role, and looking ahead to next year we have a year of some overlap in backstroke before these men will need to step up into larger roles. All five of these signees are so untapped in their potential and it’s going to be fun to see their progression here.”

Ben Hooper highlights the men’s class, coming in at 139th in the class of 2019 according to collegeswimming.com. Hooper is the only international male in the class of 2019, hailing from Hillingdon Swimming Club in London, England. With a converted personal-best of 47.94 seconds in the 100 fly, Hooper is set to compete at the national level quickly.

“Our greatest need heading into recruiting this year was finding someone that can compete at an elite level in the 100 and 200 butterfly for us,” said Geyer. “Assistant Coach Steve Mellor was able to quickly swing in and pull Ben out their motherland and join us here at LSU. We have had great success developing men from the United Kingdom and with Ben’s training background we really feel he will be competing at the national level for us.”

While Hooper will be crossing an ocean to swim for the Tigers, David Boylan will only have to cross Baton Rouge. Coming from Crawfish Aquatics, Boylan figures to provide some help in the butterfly and IM. Boylan also swam for East Ascension High School, where he was a state champion in the 200 IM at the LHSAA Division 1 State Championships. As the seventh-ranked swimmer in Louisiana according to collegeswimming.com, Boylan also finished fourth in the 400 IM at the Speedo Champions Series in Austin, Texas.

“Our second signee from Jayme Cramer at Crawfish Aquatics, David, just like Jolee, has been passionate about his want to represent LSU and this state since the recruiting process started,” said Geyer. “David had a massive summer with really great improvements and we are already starting to see that transition into his senior year short-course season.“

Julian Norman is also coming back home. Norman grew up in Baton Rouge before joining SWAC Swim Team in Fort Wayne, Indiana. The seventh-ranked swimmer out of Indiana according to collegeswimming.com, Norman is versatile, swimming both middle-distance freestyle and butterfly. Norman was a finalist in both the 200 and 500 free at the 2017 and 2018 IHSAA State Championships. Norman also won the 1000 free at the 2017 Indiana Senior State Championships.

“Julian is another signee that has a passion for LSU spending time here while he was younger when his father worked for LSU,” said Geyer. “Coming back to campus brought it all back for him and he is ready to call Baton Rouge home again. Julian will add some valuable depth to us in the fly and middle freestyle events which was a great need for us. His training background also gives him the leverage to compete in dual meets anywhere from the 200 and the 1000 and we recognize that he will have great development in college.”

David Wahlen rounds out the men’s swimming class, coming in as the 13th-best swimmer from North Carlolina. The Durham native is a backstroker hoping to have an immediate impact at the SEC level as a freshman. A member of TAC Titans, Wahlen was a finalist in the 100 back at the NCHSAA 4A State Championships. Wahlen also took gold at the 2018 North Carolina Senior Championships in the 100-yard backstroke.

“David is a quickly progressing backstroker that we were happy to get our hands on,” said Geyer. “His progression in the 50-100-200 back has been great and he is extremely motivated to come in and be able to compete at the SEC level for us immediately.”

Brooks Curry rounds out the men’s swimming club. A native of Dunwoody, Georgia and a member of Dynamo Swim Club, Curry is the 12th-ranked swimmer out of Georgia according to collegeswimming.com. Curry swims freestyle and backstroke and will look to make an immediate impact on relays.

“Our staff is really great and finding those diamonds in the rough and we believe we found that with Brooks,” said Geyer. “He really made a new commitment to training at Dynamo Swim Club and is already seeing the dividends with swimming best times in season. In terms of what we were looking for in this class, Brooks is definitely a bonus for us and will come in and hopefully be able to compete for relay positions for us.”

Hayley Montague is the lone female diver of the class. Coming from Mission Viejo, California, Montague currently dives for SoCal Divers. Montague was a 2018 Junior Diving finalist at both regionals and zones on all three boards, and a semifinalist at the 2018 USA Junior Diving National Championships.

“I can’t wait to begin working with Hayley,” said Shaffer. “She caught my eye the first time I saw her compete. Hayley is a well-rounded three-event diver who will immediately contribute to our program. She has a no-nonsense drive and determination. She’s all business and has a huge upside to develop in college.”

Manny Vazquez Bas is one of two male divers to join the Class of 2019. The Orlando native is formerly from Puerto Rico and dives for YCF Orlando. He was a champion on all three boards at the 2018 USA Diving Regional and Zone Championships. At the 2018 USA Diving National Championships, Bas was a runner-up on platform. Bas also won a silver medal at the 2017 FINA Grand Prix.

“I’ve had my eye on Manny for a number of years and have watched him grow and develop into an elite national and International competitor,” said Shaffer. “He has tremendous drive and work ethic. He has the ability to final at the SEC championship level and qualify and score at NCAA’s his first year. I’m excited to begin working with Manny.”

Cayden Petrak rounds out the 2019 diving class. Petrak is from St. John’s, Michigan, and dives for Spartan Diving Club. The Michigan Diving Association Diver of the Year is a three-time USA Diving National Qualifier. In 2018, Petrak has won a Michigan state championship and was a USA Junior Diving National Finalist.

“Cayden is a strong, powerful diver with great aerial skills and a keen sense for the water,” said Shaffer. “He’s dynamic and a good competitor. Cayden will develop well in our program and I believe he has a big upside particularly on platform. From the moment he set foot on campus I knew he was a good fit for our program and look forward to working with Cayden in the fall.”