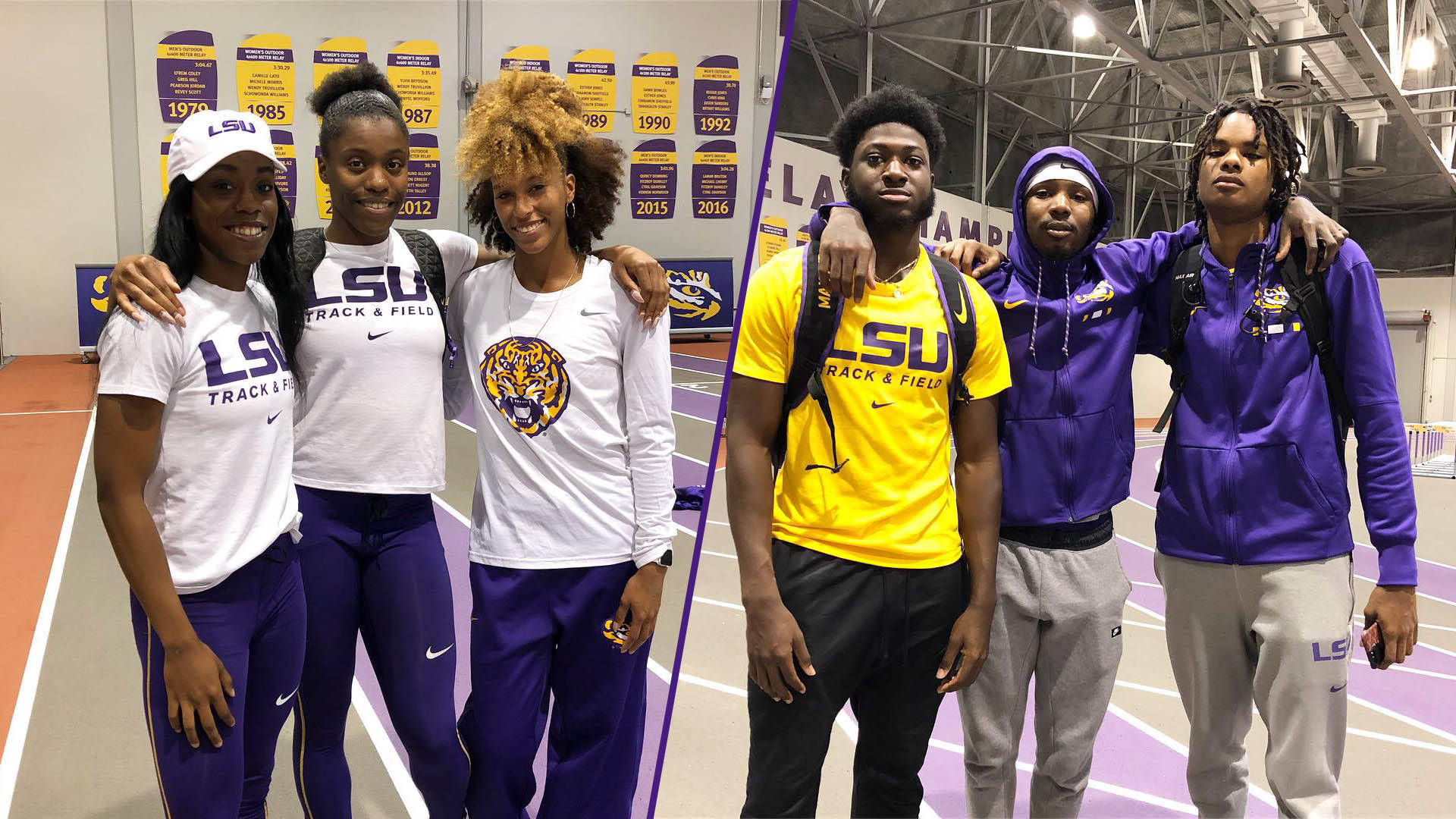 Baton Rouge, La. – Junior sprinter Cassondra Hall and sophomore jumper JuVaughn Harrison were the victors at the annual LSU pentathlon that is hosted the week of Thanksgiving every year on Tuesday afternoon at the Carl Maddox Field House. Hall scored 305 points to win her second straight title while Harrison tallied 374 points to claim his first title.

The pentathlon consists of five events: 30 meter dash, standing long jump, standing triple jump, between the legs forward shot put and overhead backward shot throw. LSU holds the event every year on the Tuesday before Thanksgiving to track progression of each athlete towards the end of their fall training sessions. The athletes are combined into teams depending on their events that includes groupings of sprinters/hurdlers, jumpers and throwers.

The winning squad on the men’s side consisted of the aforementioned Harrison, Christian Miller (356 points) and Da’Quan Bellard (349 points) in the jumps group for a total of 1,070 points. The women’s sprinting trio of Hall, Kortnei Johnson (269 points) and Shayna Yon (269 points) secured the women’s title.

Hall was dominant in her win scoring over 300 points for the second straight season. She accrued her biggest point total in the overhead backwards shot put with a toss of 18.06 meters to score 77 points to claim the title in this event; her throw of 18.06 meters broke her own record for the sprinters group. She rattled off a standing triple jump of 7.76 meters (46 points), standing long jump of 2.73 meters (52 points), a 30 meter sprint of 4.18 (73 points) and forward shot put of 15.64 meters (57 points) to round out her winning effort.

Harrison (373 points) dethroned the two-time reigning champion Miller (356 points) by 17 points. Harrison was the highest scorer in three events on the day, the 30 meter dash (3.81 seconds), standing long jump (3.39 meters) and forward between the legs shot put (15.57 meters). The 30 meter time earned him 96 points, standing long jump was worth 85 points and the forward shot put garnered him 56 points. He finalized his title with a standing triple jump of 9.80 meters (80 points) and an overhead backwards shot put of 15.64 meters (57 points).

Mercy Abire, a junior transfer from Oral Roberts, was the supreme leaper with event titles in the standing long and triple jump on the women’s side; her long jump was 2.85 meters while she glided 8.16 meters in the triple jump. Freshman sprinter Sha’Carri Richardson stole the show in the 30 meter dash with a time of 4.12, and fellow freshman Ariyonna Augustine registered the farthest between the legs forward shot put of the day with a distance of 15.82 meters.

Bellard split the event title in the standing long jump with Harrison while matching the distance of 3.39 meters. Miller had strong showings in the standing triple jump (10.05 meters) and overhead backwards shot put (16.16 meters) to boast the top marks in those events. Miller was runner up in the individual competition with 356 points and Bellard took third with 349 points. The women’s runner up was Abire with 275 points and Johnson tallied a third-place finish with 269 points.

The Tigers will return to training after Thanksgiving before exams begin in December. The first meet of the year for the Tigers will be on Jan. 12, 2019 in Birmingham, Ala., at the UAB Blazer Invitational. A full schedule for the 2019 season can be viewed at LSUsports.net.