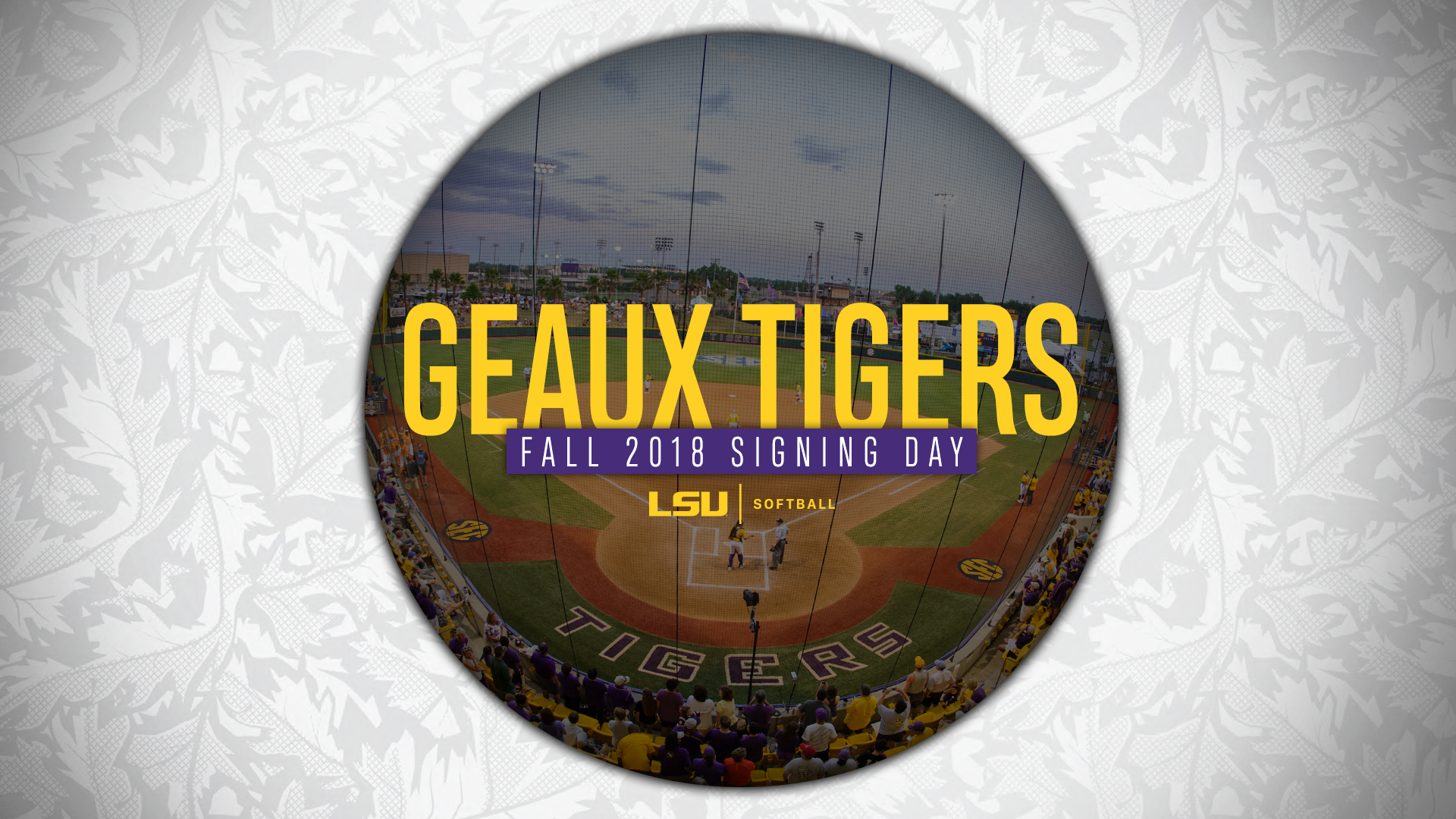 BATON ROUGE – As the fall season comes to a close, LSU softball and head coach Beth Torina announce the signing of seven during 2018 Signing Day. All will be freshman and eligible for the 2020 season.

“The seven members of the 2019 class are a very special group of young women,” said Torina. “They have a wealth of experience from playing at the highest level in their respective age groups.  They have been honored with countless individual awards and won many championships throughout their high school and travel ball careers, and we hope to see that continue during their time at LSU.

“We have worked very hard to establish a culture of excellence at LSU, and I am confident that they will make an immediate impact on our program. We are so excited to welcome them and their families to the Fighting Tiger family at LSU.”

Abrams, a 5-9 utility player, comes to Baton Rouge from Columbia, Louisiana. She is a four-year letterwinner at Caldwell Parish High School, leading her team to a Class 3A State Championship in 2017. As a junior, she was named First Team All-District, 3A All-State and the Class 3A State Championship MVP. That season she hit .535 with 42 runs scored, 61 total hits, 17 doubles, five triples and 10 home runs, to go along with a 1.008 slugging percentage and 24 stolen bases. In the circle, she went 11-0 with a 1.09 earned run average and 128 strikeouts in 96 innings pitched. As a freshman, she earned First Team All-District as a pitcher after hitting .321 with nine doubles and two home runs. She went 3-1 in the circle with 30 strikeouts and a 1.58 ERA.

Abrams, a National Honor Society Member and a three-time Honor Roll honoree, plays for the Marucci Patriots of Louisiana travel ball squad. She is one of seven children and anticipates majoring in child and family studies.

A Yorba Linda, California native, Briggs joins the Tigers as a 5-5 outfielder. She is a four-time letterwinner at Orange Lutheran High School and has led her team to three-straight Top 5 finishes in the CIFSS. As a freshman, her team was ranked sixth in the nation. In three high school seasons, she has been a part of 84 wins and has earned many accolades in her prep career. She is a three-time First Team All-Country selection, a First Team All-American by Extra Innings Softball, FloSoftball and Maz Preps, a three-time First Team All-Trinity league selection and picked up First Team DI CIFSS honors and team MVP honors as a junior. She has been invited to tryout for the Junior National Team in January.

Last season, Briggs hit .490 with 45 runs scored, 48 hits, 30 RBI, 12 doubles, four triples and eight home runs. She has tallied 14 home runs in her prep career and a total of 79 runs batted in. Briggs has had a very decorated travel ball career with Bruce Richardson’s So Cal A’s. She is part of the Student Athlete Leadership Team at Orange Lutheran and is undecided of a major at LSU.

Calland, a 5-3 catcher, joins the Tigers from Katy High School in Katy, Texas. An accomplished prep player, Calland led her high school to three-straight district championships and was a regional finalist for three years in a row. As a junior, she batted .402 with seven home runs. She is a part of 102 victories in her prep career at Katy, earning Second Team All-District honors as a freshman and First Team All-District honors as a sophomore and junior. Calland plays for the Texas Bombers travel ball squad under coach Scott Smith.

Calland is also a three-time Academic All-State honoree and is a part of the National Honor Society. Calland has two siblings and anticipates majoring in kinesiology or human movement science.

Heading into her senior season at De LaSalle High School in Marrero, Louisiana, Edwards, a 5-7 pitcher, is an accomplished athlete through three years of high school, earning all-district honors for three-straight years. She led her team to two-straight Division II State Quarterfinal appearances. Edwards, who is a part of the Texas Bombers organization, is a three-time honor roll student and participated in Art Club in 2017. She has two siblings and is anticipating majoring in veterinarian medicine at LSU.

Gutierrez, a 5-10 first baseman, joins the Tigers from St. Lucy’s Priory High School in Upland, California. As a three-time second team all-league performer, she hit .415 as a freshman with 27 hits, 14 runs scored and nine RBI. She is with Dave Mercado’s So Cal A’s travel ball team and won the PGF Nationals twice and the Louisville Slugger Independence Day tournament three times.

Gutierrez is a three-time honor roll student and scholar-athlete. As a senior, she is currently participating in the Captain’s Council. She is one of three children in her family. Her sister Lauren currently is a sophomore at the University of Nevada in Reno.

Jones, a 5-5 outfielder, joins the Tigers from Lutheran South Academy in Deer Park, Texas. Led her squad to a first place finish at districts as a junior. In 20 games as a junior, she scored 22 runs and tallied 33 hits, to go along with 21 RBI, seven doubles, one triple and three home runs. She finished the season with a .623 batting average, a 661 on-base percentage and a .962 slugging percentage, earning her First Team All-District, First Team All-State and Co-MVP.

The anticipated psychology major has five siblings in her family. Her father Bill played one year of baseball at Ranger Junior College and is the coach of Jones travel ball team in the Texas Bombers organization. Jones is a student ambassador in her senior year at Luther South.

After her final year of her prep career, Pleasants, a 6-0 infielder, will join the Tigers in the fall of 2019 from J. Frank Dobie High School in Houston, Texas. She is a three-time First Team All-District infielder, leading her team to three-straight Top 5 finishes at districts. As a junior, she hit .589 with 45 RBI, 43 hits, 12 doubles and six home runs with a .692 on-base percentage. She has had a very distinguished career with the Scrap Yard International travel ball team and has been invited to tryout for the Junior National Team in January.

Pleasants is a four-time honor student, earning First Team All-Academic the past three years. She one of four children in her family and anticipates majoring in kinesiology.