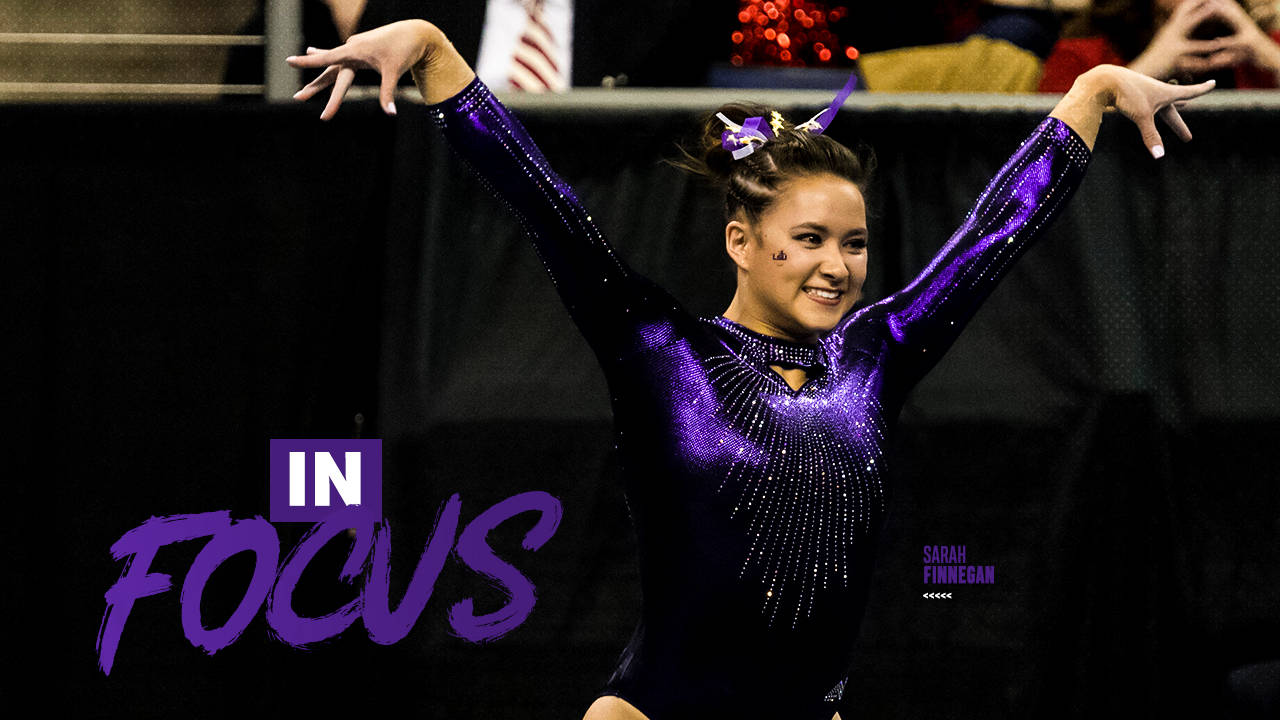 Those are the words that describe LSU senior gymnast Sarah Finnegan, according to coaching legend D-D Breaux. Breaux has seen many special gymnasts in her 41 years at LSU, including recent standouts such as Ashleigh Gnat and Myia Hambrick but Finnegan may be the most special of them all.

Finnegan, a senior from Lee’s Summit, Mo., has had quite an accomplished career as a Tiger. She was named an All-American during her first two years at LSU, as well as being named All-SEC in 2016 and to the 2016 first-year SEC academic honor roll. She is also the first Tiger gymnast to win a NCAA individual championship on the bars.

When describing that experience, Finnegan said “It’s an amazing feeling. It’s great to say that I changed something in LSU gymnastics history. It’s great because we have changed history many times since I’ve been here, but the fact that I personally did that, means that I can leave my mark and affect and encourage the next generation of girls who come after me.”

Even through these massive successes, Breaux has not seen a difference in Finnegan, as she has stayed grounded both on and off the floor. It’s something that Breaux has attributed to Finnegan’s family and some of the trials and tribulations that Sarah has faced over the past year.

“She comes from a fabulous family, just the foundation to handle gymnastics but also the grounded nature and support from her family,” Breaux explained. “It’s the total package of parental support, unity, faith in God, education and commitment to a sport.”

As mentioned, it has not always been easy for Finnegan during her time at LSU as her father Don, who was a collegiate All-American at Iowa State, battled pancreatitis last year during the season. Pancreatitis is inflammation in the pancreas and it is usually acute pancreatitis which can appear suddenly and last for only days. However, in severe cases such as in Sarah’s father case, it can be life-threatening. The trying times that forced Sarah to compartmentalize and take everything one day and one step at a time.

“Last year we prayed and really supported her when her father was ill,” Breaux said. “Even through that, Sarah kept it over here and finished her schoolwork, took care of her gymnastics, took care of her relationships and kept her unwavering faith in God. Her whole family prayed her dad, Don, through his illness.”

It’s this steady and calming approach that has made Finnegan one of the leaders on the team and has made her noticed by both her teammates and coaches.

That moment can be anything for Finnegan. It could be shining on the practice mat at the LSU training facility, helping the Tigers advance to the NCAA championships, or even on the international stage where she was an alternate for the 2012 U.S gymnastics team in London.

Sarah elaborated about the Olympic experience saying, “It’s really cool to be technically considered an Olympian. I was able to go to London and not only watch our events but other events as well and also my family was able to join me while I was there. My family and I were able to go to London and also to France because it was my parent’s wedding anniversary. It was a great experience as not many people can say that they’ve done it and I was fortunate enough to do it at the age of 15. It’s something that can never be taken away from me, and through all of the experiences that have come after it, it was totally worth it.”

It’s definitely been worth it for the Tigers to have Finnegan on the team for the past three seasons. However, there was a time when it looked like that might not be the case as Breaux said, “What drew us to her were her accomplishments as a gymnast and her accolades. Unfortunately, she kind of dropped out of the sport for a while but we learned about her from a coaching friend in Missouri and we began pursuing her and we were fortunate enough for her to come to LSU. Her coach, Al Fong, had been a gymnast here at LSU, so we had a relationship with her through someone who had coached her already.”

Now, entering her final season, Finnegan is embracing the idea of being a role model to the younger athletes on the squad, and she knows how vital it is to be a consistent force everyday both on and off the mat.

“It’s what you do in the gym, in school, and in your free-time,” she said. “I think I’ve adapted to my role as just being consistent and leading through my actions.”

Sarah has definitely changed from the time she first stepped onto LSU’s campus, as Breaux admitted that Finnegan was very quiet and reserved during her freshman season. Today, that is quite the opposite as Finnegan articulated what she is expecting during her final season in front of fans at the Pete Maravich Assembly Center.

“It’s our time to show off for our fans what we’ve been doing all preseason.”