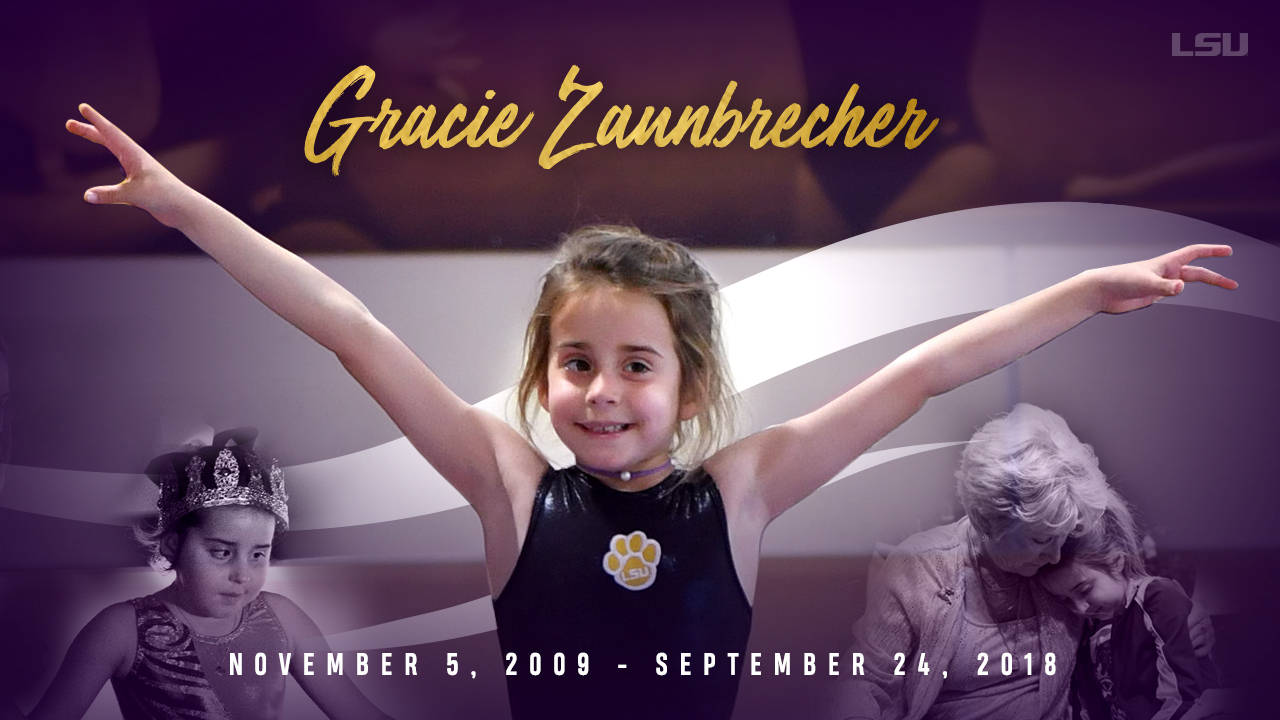 Following a nearly two-year fight with DIPG, a rare and aggressive brain tumor, eight-year old Gracie Marie Zaunbrecher passed away Monday morning with her family and friends by her side at her home in Eunice, Louisiana.

“The team has suffered a heartbreaking loss,” LSU Gymnastics head coach D-D Breaux said. “Our whole program fell in love with Gracie two years ago when Lexie (Priessman) found out about her story. Lexie, McKenna (Kelley) and Ashleigh (Gnat) rallied the team and staff to support Gracie and her family. It has been an amazing journey of faith, love, courage and belief in God.”

Gracie became part of the LSU gymnastics family in March 2017 after her diagnosis when her wish was be to an LSU gymnast for a day. Through Dreams Come True, Gracie and her family joined the team at the training facility for an unforgettable day.

Gracie and senior Lexie Priessman became particularly close over the last two years with a special bond. Gracie never wanted to miss a meet and was able to watch the Tigers win their second-straight SEC Championship in St. Louis in March. Gracie also joined the entire team and was introduced in front of the Maravich Center crowd prior to the meet against Texas Woman’s. She watched floor side as Priessman closed out the meet for the Tigers.

I know this is Gods plan because He reached down and grabbed your hand. Gracie Zaunbrecher I love you and will miss you everyday. 💔 pic.twitter.com/R8diZpkILE

“I am forever thankful for Gracie and her sweet smile, unforgettable determination and mentality that she would never give up,” Priessman said. “I’ve never had a little sister before but she took on that role. We have a precious little angel watching over us now. I know she will be watching over us this season, and we will fight for Gracie.”

On Sunday afternoon, Breaux and the gymnastics team recognized Gracie as the winner of the Eye of the Tiger Award. Her father Byron was in attendance and accepted the award in her honor.

Visitation will be held at Ardoins funeral Home in Eunice, Louisiana at 1:30 p.m. Tuesday with a rosary following at 6 p.m. The funeral will be held at St. Anthony’s Catholic Church at 4 p.m. Wednesday.

Hey Tiger fans, help us welcome the newest member of the #LSU Gymnastics team. Gracie is a fighter! pic.twitter.com/ACfWF5pjeB

Hey Gracie, we are thinking about you in Jacksonville. Geaux Gracie! https://t.co/cWTD4h7fvM pic.twitter.com/VXQfZffEuf