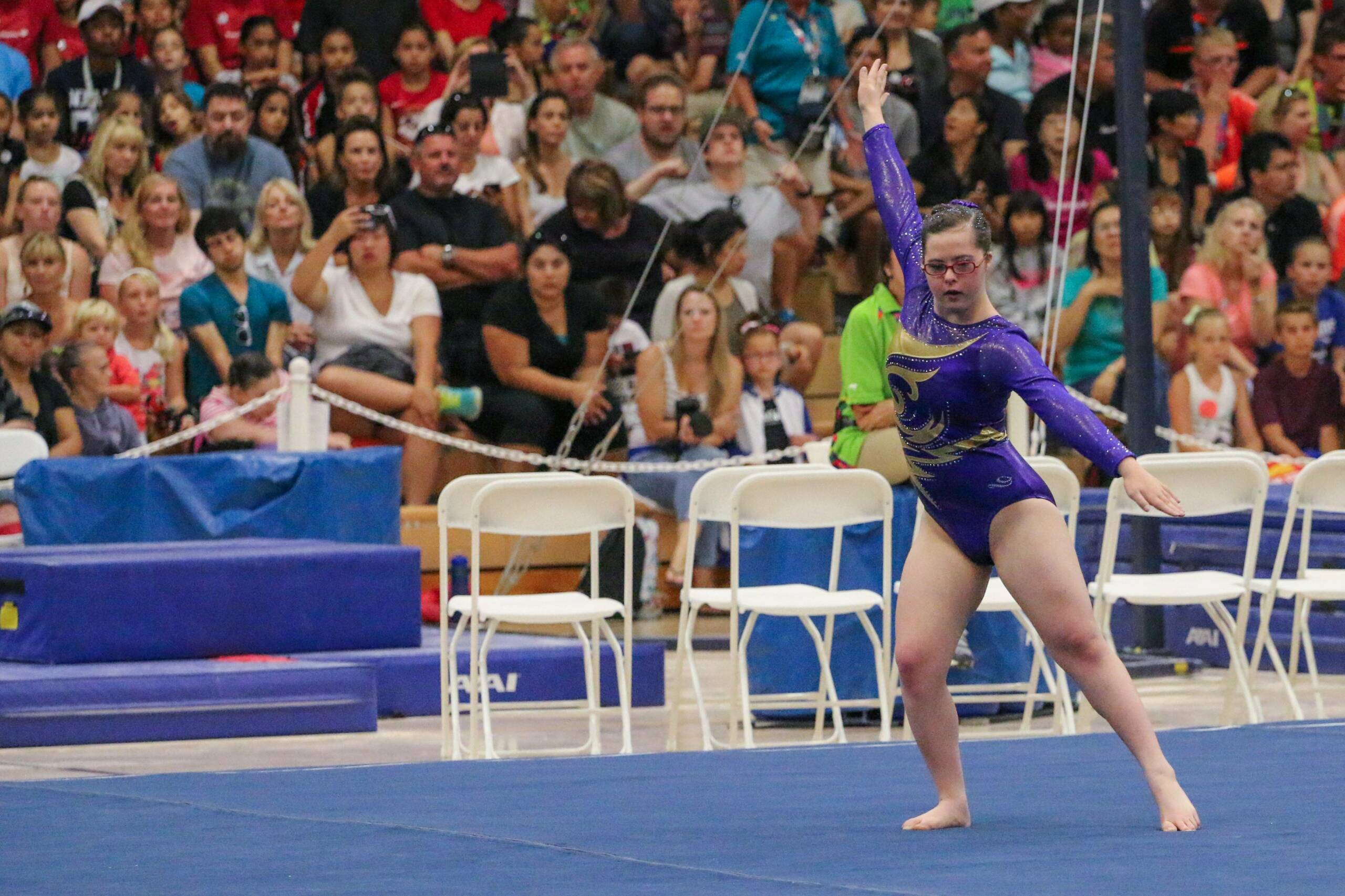 Pam Reither Laffey has traveled the world for the sport of gymnastics. For 12 years now, Pam’s daughter Shannon has won state and national gymnastics titles. An LSU gymnast from 1981-85, Pam has the unique opportunity to coach her own daughter and was even an assistant coach on the world games team in 2015.

Shannon is 22 years old and the middle child of Pam and her husband DeWayne. Shannon was born with Down syndrome but has been a part of gymnastics since she was a little girl when Pam taught classes in Georgia.

“I put both daughters in class while I was teaching and enjoyed being back in the gym,” Pam said. “Children with Downs typically have low muscle tone but are very flexible, however Shannon was just the opposite – relatively strong but not particularly flexible. She loved the bars and would just hang on everything.”

Shannon continued to progress in gymnastics and eventually competed with the Special Olympics. With her daughter getting better every day, Pam began to work with a local gym in Georgia that had a strong special needs program. As things continued to progress, the mother and daughter got involved in the USA Gymnastics HUGS Program. HUGS, which stands for Hope Unites Athletes with Special Abilities, is a USAG level and can be included in any sanctioned event.

“Working with these gymnasts with disabilities is so inspiring and uplifting,” Pam said. “They constantly remind me every day through their actions and attitude that they don’t have disabilities, just different abilities. HUGS is a great program which allows special needs gymnasts more opportunities to compete and you should see how the typical gymnasts embrace and cheer for these athletes at meets. The numbers of gymnasts participating in HUGS is growing every year and we are proud to be pioneers in this movement.”

For 12 years now, Shannon has represented the United States all across the world. She competed in 2015 at the Special Olympic World Games in Los Angeles with her mom watching as an assistant coach on the floor. Shannon also competed in Mora, Italy in 2015 at the second Down Syndrome World Championships where she took home first on beam and second in bars, floor and all-around.

Shannon’s gymnastics career has not come without setbacks as the sport usually delivers to gymnasts of all ages. Shannon quit artistic gymnastics to focus on rhythmic gymnastics in 2016 after being diagnosed with Celiac disease.

She could not hold out for long as she decided just six months ago to make a comeback and prepare for the Down Syndrome World Games in Bochum, Germany. The comeback was worth it as she won the senior all-around and became a world champion this July.

The schedule for Shannon doesn’t stop. When she’s not at the gym, Shannon works part time at Home Depot and enjoys kayaking and playing softball. She has traveled with teammates from Chattanooga Gymnastics to Brazil and Norway for Gymnastics for All events and plans to head to Austria in 2019 for the World Gymnaestrada.