Thomas, Thompson Show Out in Jamaica 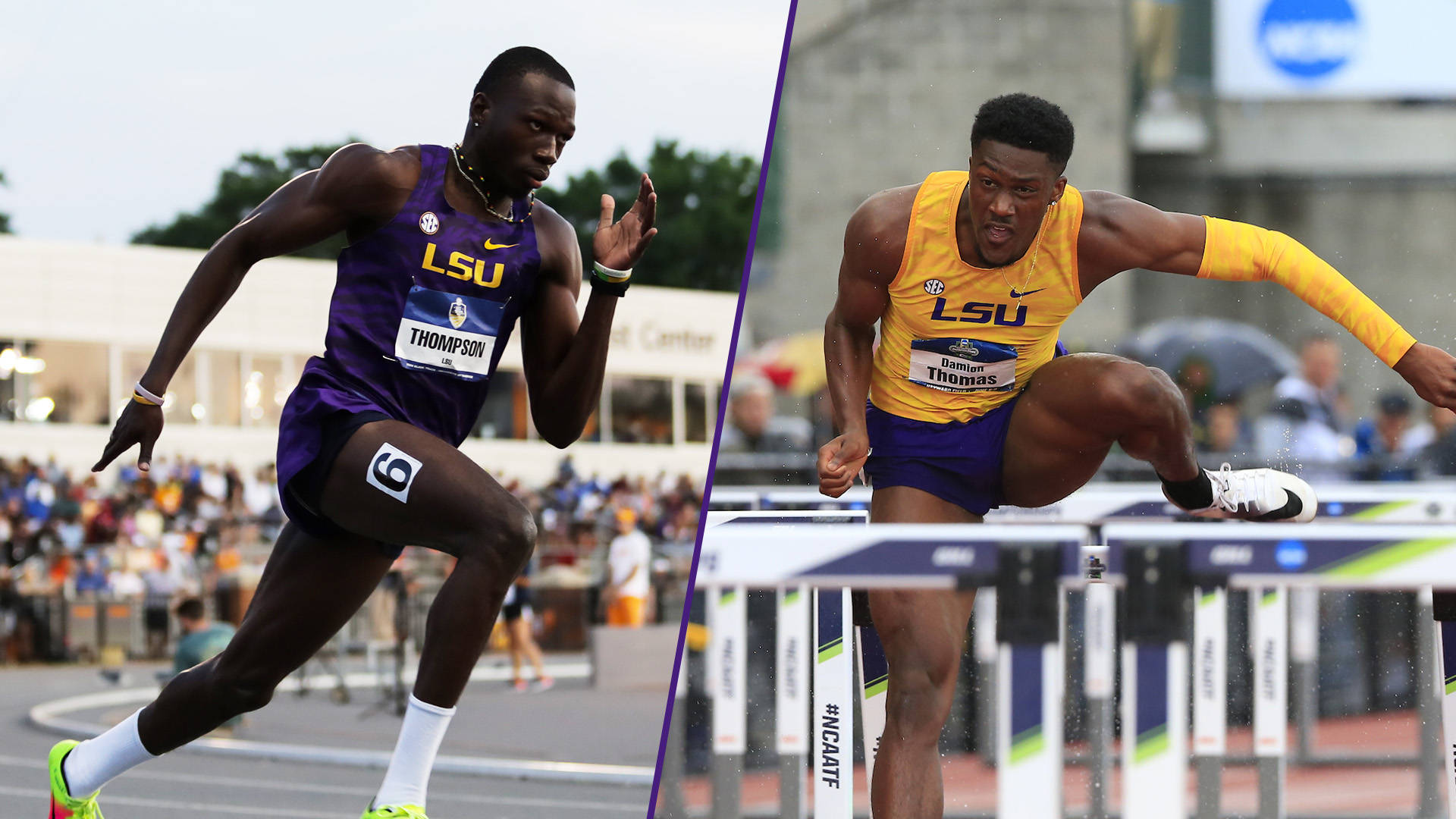 Kingston, Jamaica – It was a weekend to remember down in Kingston, Jamaica, for two current athletes on the LSU track and field team. Jahnoy Thompson (200 meter dash) and Damion Thomas (110 meter hurdles) both wowed the crowds with wins in their respective events at National Stadium.

Vying for a spot on the Jamaican national team at the 2018 IAAF U20 World Championships on Saturday night, rising sophomore Damion Thomas clinched his spot on the team while setting a U20 world record in the midst of it.

“I was surprised when I saw the time but I knew all along I was capable of running the record,” Thomas said. “Like Coach {Dennis} Shaver says, ‘It’s there.”

“The record is something I had my eyes on since I started hurdling,” Thomas noted in an interview IAAF.org. “I remember sitting at home watching the French guy break the record in 2014 and for me to equal it before World Juniors is a happy moment for me.”

Bursting out of the blocks in lane three, Thomas dashed down the straightaway over 10 39-inch hurdles in 12.99 seconds to set the U20 world record in the 110 meter hurdles. In a race that featured two of the top three U20 times in history, Thomas prevailed as the victor as he out leaned Orlando Bennett (13.00) at the finish line to win by one hundredths of a second. The 12.99 by Thomas matched Wilhem Belocian’s (France) time of 12.99 that he clocked in 2014. The 39-inch height level is used for U20 world competitions.

Thompson came away as the 2018 Jamaican senior champion in the 200 meter dash on Sunday evening with a lifetime best of 20.21 in the half-lap sprint. The title for Thompson is his first domestic title and the time of 20.21 ranks as the seventh-fastest mark in LSU history.

“It’s been a long journey and I still have a long way to go,” Thompson mentioned. “To be honest, I wasn’t coming here for a personal best, I just wanted to make the team. I’m just grateful for this opportunity, and I’m living in the moment right now.”

With the win, Thompson secures his spot on the Jamaican national team at the 2018 Athletics World Cup which will take place in London, England, on July 14-15. Other finishers of note at the Jamaican national meet were Fitzroy Dunkley in the 400 meter dash, he place third in the finals with a readout of 45.77, and Renard Howell took eighth in the 200 meter dash with a time of 22.77.

Thomas closed out his first collegiate season on the NCAA level as a two-time First Team All-American (60m/110m hurdles). He already owns the second-fastest time in in LSU history in the 110 meter hurdles at the 42-inch height with a 13.44 that he clocked at the NCAA Championships a few weeks back in Eugene. Thomas narrowly missed out on a NCAA national title in the 110 meter hurdles at the NCAA Championships when he took third with a time of 13.45, finishing two hundredths of a second behind Grant Holloway (13.43). Thompson was a contributor on the fourth-fastest outdoor 4×400 meter relay earlier this month at the NCAA Championships. Thompson teamed up with Correion Mosby, Renard Howell and Jaron Flournoy to take third at the national meet with a readout of 3:00.55.

The USATF Championships also came to a close on Sunday evening in Des Moines, Iowa. Cassandra Tate, who competed at LSU from 2009-12, and Kymber Payne, who just finished up her collegiate eligibility, highlighted the final day of the national meet with a three-four finish in the 400 meter hurdles. Tate garnered bronze with a readout of 55.00, while Payne finished fourth with a season best of 55.54. Kimberlyn Duncan was LSU’s only other finalist of the final day and she placed sixth in the 200 meter dash with a time of 23.13.

On Saturday, Michael Cherry had the highest finish of the day by an LSU representative. He circled the track once in the 400 meter dash with a time of 44.85 to garner bronze.