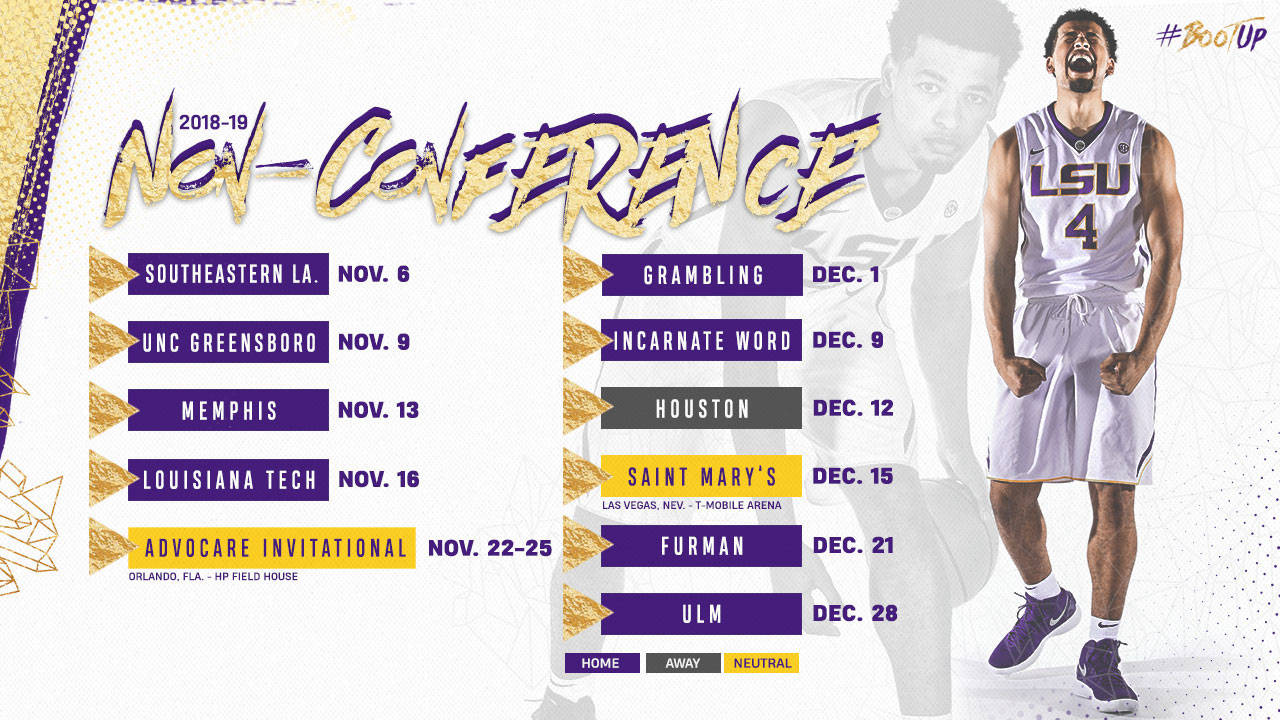 BATON ROUGE – The contracts have been received and posted for LSU’s non-conference schedule for the 2018-19 men’s basketball season and the Tigers will face a schedule in which they face a minimum of five teams that played in the post-season and six teams that won at least 21 games this past year.

The Tigers, who advanced to the second round of the NIT a year ago in its first post-season appearance since 2015, could also face the possibility of meeting teams like defending national champion Villanova or the NCAA Elite 8 Seminoles from Florida State as part of the AdvoCare Invitational Nov. 22, 23 and 25 at the ESPN Wild World of Sports Complex at Disney World in Florida.

The schedule is subject to the approval of the LSU Athletic Council at a future meeting.

Season tickets information for the 2018-19 men’s basketball season can be found at LSUtix.net. Season ticket renewals are due at the end of this month.

The basketball season will open earlier this year on Tuesday, Nov. 6, and the Tigers will host Southeastern in the second game of a doubleheader that will feature the LSU Lady Tigers in the opener that night.

“We are very happy to have completed our non-conference schedule for the 2018-19 season,” said second-year LSU head coach Will Wade. “With the records and performance last year of the teams we will face this season, we are confident that this schedule will allow us the opportunity to mold and shape our team prior to the start of the Southeastern Conference schedule.

“We want all Tiger fans to be involved with our program again this year and to purchase their tickets now starting with these very important non-conference contests.”

The Tigers will open at home with three straight games against teams that won 20 or more games the year before, facing Southland Conference champion Southeastern (22 wins, NIT); Southern Conference champion UNC Greensboro (Nov. 9, 27 wins a year ago, NCAA Tournament); and Memphis on Nov. 13 (21 wins and a team LSU defeated, 71-61, a year ago in Memphis).

LSU will face Louisiana Tech on Friday, Nov. 16, the night before the Tigers final home football game against Rice.

After the normal break for semester exams, LSU will host Incarnate Word on Dec. 9 before a string of three consecutive games against teams that won at least 23 games last year.

That begins on Dec. 12 with a game at Houston. LSU defeated the Cougars, 80-77, last season in Baton Rouge. Houston won 27 games a year ago and reached the second round of the NCAA Tournament.

Following that, the Tigers will head to Las Vegas for a 2018 MGM Grand Showcase game against St. Mary’s in a game scheduled for the T-Mobile Arena. St. Mary’s won 30 games a year ago and advanced to the NIT quarterfinal round. LSU will conclude its pre-holiday schedule with a Dec. 21 game back in Baton Rouge with Furman, which posted 23 wins a year ago.

The non-conference schedule concludes with a Dec. 28 game against ULM, which played in the CollegeInsider.com post-season tournament earlier this year.