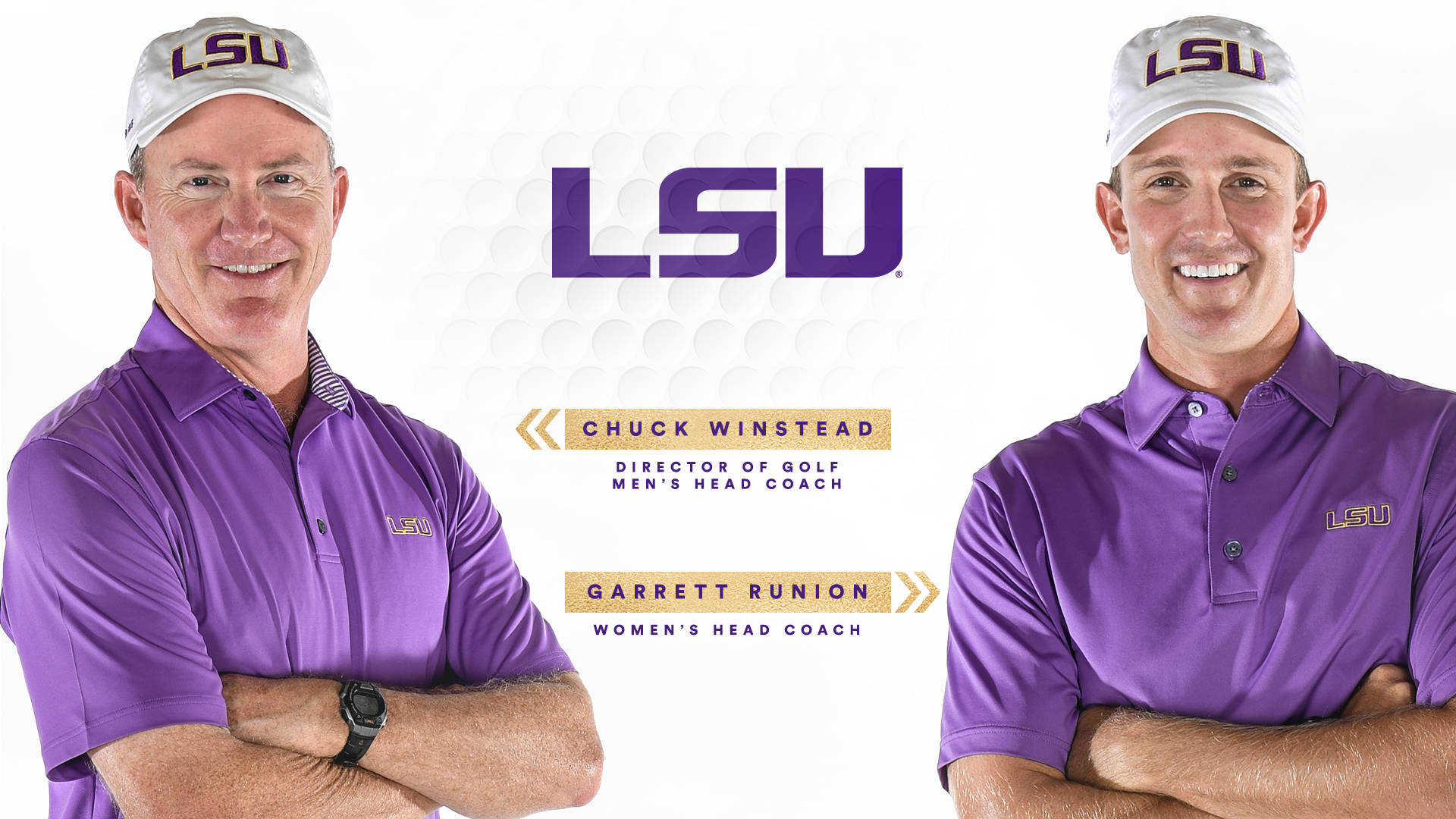 BATON ROUGE – Garrett Runion, who has been part of two national championships during his collegiate coaching career, has been selected as the fourth head coach in LSU women’s golf history, LSU Vice Chancellor and Director of Athletics Joe Alleva announced on Friday.

Alleva also announced that LSU men’s head coach Chuck Winstead – who has established the Tigers as one of the premier programs in college golf – will take on the responsibilities of Director of Golf.

“Coach Karen Bahnsen built something truly special here at LSU with the women’s golf program,” said Alleva. “I know Coach Runion and Coach Winstead will build off of her incredible legacy and help continue to build both men’s and women’s golf into elite programs.”

Bahnsen who served as head coach of the women’s program for 34 years recently announced she would be moving on to work with the Tiger Athletic Foundation helping to promote LSU Athletics.

Runion has spent the past six seasons as the LSU men’s golf assistant coach and in April was named a finalist for the Jan Strickland Outstanding Assistant Coach Award for the third year in a row. A 2008 LSU graduate and three-year letterwinner for the Tigers, Runion has been instrumental in LSU’s return to national prominence since joining Winstead’s staff prior to the 2012-13 season. LSU has finished in the Top 10 at the NCAA National Championships in four of the last five seasons and earlier this week had one former and three current Tigers qualify for the 2018 U.S. Open next week at Shinnecock Hills.

“I am extremely humbled and honored to be named the next head coach of the LSU women’s golf program,” said Runion. “Having the chance to coach at my alma mater is very special to me and I look forward to building a program we can all be proud of. I want to thank Director of Athletics Joe Alleva and Chuck Winstead for giving me this great opportunity.”

The 2014-15 season was one for the ages in the history of LSU men’s golf as the Tigers staked their claim as the premier program in college golf with a 4-1 win over USC to win the NCAA national title. Over the past six seasons, 12 Tigers have earned All-America honors and 14 have been named All-Southeastern Conference.

Runion returned to LSU after guiding the Sharks of Nova Southeastern to the NCAA Division II national championship in his one and only season as head coach in 2011-12. The run to the national title highlighted a historic season that saw Runion receive the Dave Williams Award as the NCAA Division II National Coach of the Year, as well as earning Sunshine State Conference Coach of the Year and Eaton Golf Pride South Region Coach of the Year honors. He served as the program’s assistant head coach during the 2010-11 season.

A native of Orlando, Florida, Runion called Baton Rouge home for four seasons from 2003-08. A four-time member of the SEC Academic Honor Roll and three-time SEC Community Service Team selection, Runion earned his bachelor’s degree in general studies in May 2008. He and his wife, Meghan, have one son, Reid, aka “Rocket” (3) and one daughter, Riley, who was born on May 26, 2018.

Winstead is the winningest coach in LSU men’s golf history. He led the Tigers to their first SEC championship in more than 30 years and the first NCAA championship since 1955.  He will take on oversight of both LSU golf teams in his role as Director of Golf, while continuing with his responsibilities as the men’s head coach. Winstead is going into his 14th season as the head men’s golf coach after serving as the Director of Instruction at LSU’s home course, The University Club.

“I want to thank Joe Alleva for the opportunity to lead in this new role,” said Winstead. “I also want to thank Karen Bahnsen for the foundation she built with the women’s program. Garrett and I are excited to build on that foundation and for what the future of LSU golf holds.”

“Chuck is clearly one of the top instructors and coaches in golf today,” said Alleva. “He will do an outstanding job overseeing both programs.”

Winstead’s reputation as one of the top golf teachers in the country has been reflected in LSU’s performance on the course over the past 13 seasons as the team’s scoring average has dropped dramatically since his first season in 2005-06. After averaging 295.6 shots per round as a team in his inaugural season, LSU teams have shot 287.3 or lower over the past five seasons with a team-best 284.5 in 2016-17 for the lowest in Winstead’s tenure as head coach. He is the winningest coach in program history with 35 tournament championships in his 13 years as head coach.

After graduating from LSU in 1991, Winstead embarked on a career as a professional golfer with a stint on the South American tour before launching his teaching career. His credentials include an association with Jack Nicklaus’ Golden Bear Golf, Inc., where he served as a senior manager developing, managing and initiating the launch of Golden Bear Golf Centers worldwide. He was also a head instructor for the Bob Toski Learning Center and the Director of Instruction at English Turn Golf & Country Club. Winstead and his wife, Jennifer, are the proud parents of two sons, Trey and David. Trey is currently a member of the LSU men’s golf team.