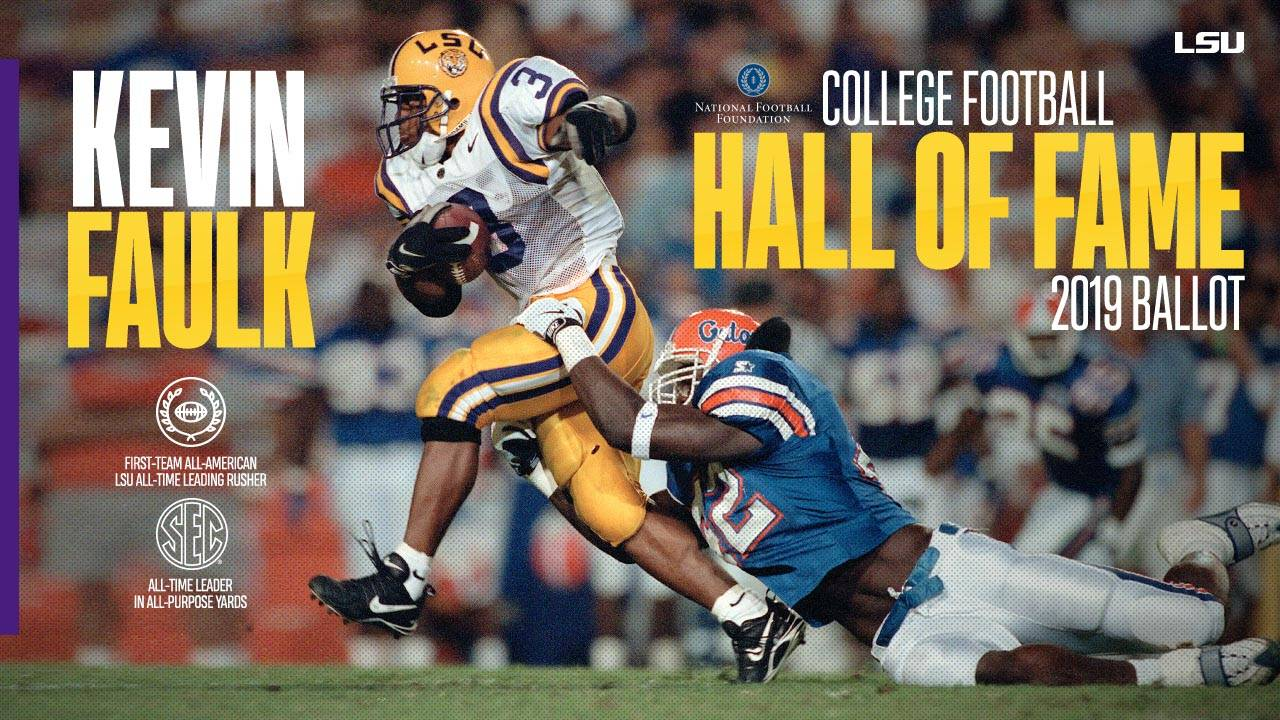 BATON ROUGE – Kevin Faulk, the leading rusher in LSU history and the Southeastern Conference’s all-time leader in all-purpose yards, is one of 76 players and six coaches from the Football Bowl Subdivision included on the 2019 College Football Hall of Fame ballot, the National Football Foundation and the College Hall of Fame announced on Monday.

One of the all-time LSU greats and a member of the Louisiana Sports, LSU Athletic and New England Patriots Halls of Fame, Faulk helped lead the Tigers to three bowl appearances from 1995-97. He earned first team Associated Press All-America honors as an all-purpose back in 1996.

Faulk retired from the NFL in 2012 after 13 years with the New England Patriots where he helped the franchise to three Super Bowl titles. Faulk, a 1999 graduate of LSU, is currently the Director of Player Development for his alma mater.

“To be listed among this group is extremely humbling and a tremendous honor,” Faulk said. “I was fortunate during my career to be surrounded by outstanding teammates and coaches and without them, nothing that I accomplished on the football field would have been possible.”

“It’s an enormous honor to just be on the ballot when you think that more than 5.26 million people have played college football and only 997 players have been inducted,” said NFF President & CEO Steve Hatchell. “The Hall’s requirement of being a First-Team All-American creates a much smaller pool of only 1,500 individuals who are even eligible. Being in today’s elite group means an individual is truly among the greatest to ever have played the game, and those actually elected to the Class will be part of a momentous year as we celebrate the 150th anniversary of college football in 2019.”

The announcement of the 2019 Class will be made Monday, Jan. 7, 2019, in Santa Clara, Calif. The city is serving as the host for the CFP National Championship, which will be played later that day at Levi’s Stadium.

The 2019 class will officially be inducted during the 62nd NFF Annual Awards Dinner Dec. 10, 2019, at the New York Hilton Midtown. The inductees will be permanently enshrined at the College Football Hall of Fame in Atlanta later that December and honored on the field during the 15th Annual National Hall of Fame Salute during the Chick-fil-A Peach Bowl. They will also be honored at their respective schools at an NFF Hall of Fame On-Campus Salute, presented by Fidelity Investments, during the 2019 season.