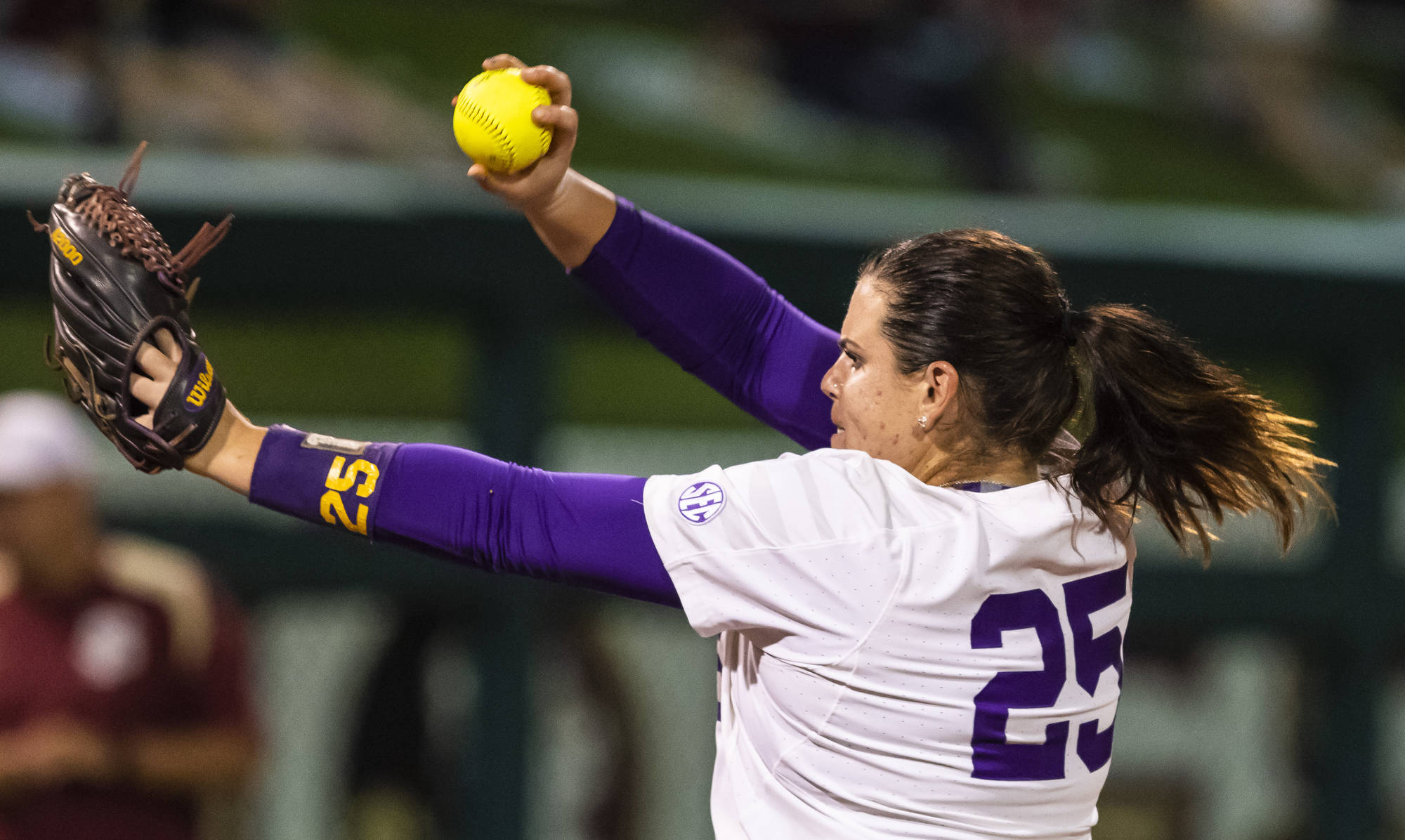 McNeese’s Erika Piancastelli and LSU’s Allie Walljasper, both Californians and four-time selections on the All-Louisiana collegiate softball team, are major award winners in 2018.

Piancastelli, who plays third base and is from Carlsbad (between Los Angeles and San Diego), is the Louisiana Hitter of the Year. Walljasper, a right-hander from Manteca (between Sacramento and Modesto), is Pitcher of the Year for the second consecutive season.

Also winning major awards are Louisiana-Lafayette shortstop Alissa Dalton, the Newcomer of the Year, and Northwestern State’s Cayla Jones, who plays second base and is Freshman of the Year. Angel Santiago of Nicholls is Coach of the Year for the second time in three seasons.

A Louisiana Sports Writers Association panel of media and sports publicists selected the All-Louisiana team, based on statistics and performances through the teams’ conference tournaments. Those statistics were used in this story.

Piancastelli hit .384 with 22 home runs and 59 RBI and was Southland Conference Player of the Year and Hitter of the Year for the fourth consecutive season. She broke 20 combined McNeese and Southland records, including 13 marks. Piancastelli is the McNeese and Southland career leader in home runs (75), hits (253), RBI (212), runs (228), walks (229) and total bases (548). Her career batting average was .401.

Piancastelli’s plus-17 advantage in Hitter of the Year votes — 18 for her, one apiece for four others — was the largest in nine years.      Walljasper was 16-5 with a 1.00 ERA and six shutouts. The right-hander broke LSU and SEC game records by pitching 19 innings in an April 6 victory against Ole Miss. She helped LSU reach an NCAA Tournament super regional for the fourth consecutive year.

Walljasper collected 17 votes for Pitcher of the Year, Runner-up was UL Lafayette’s Summer Ellyson with four votes. It’s the fourth straight year that LSU has the Pitcher of the Year. Walljasper’s teammate Carley Hoover won it her first two seasons (2015, 2016). Hoover is All-Louisiana second team in 2018 and also is a four-time state honoree.

Another commonality between Piancastelli and Walljasper — they’re the only repeat first-team selections from 2017.

Dalton, a sophomore from Cypress, Texas, and a transfer from Oklahoma’s 2017 NCAA championship team, hit .376 for the Ragin’ Cajuns with 30 RBI and ranked among the toughest in the nation to strike out. She whiffed five times in 198 plate appearances. The 10th state Newcomer of the Year in the program’s history and an All-Louisiana first-team selection, Dalton helped the Ragin’ Cajuns earn their 20th consecutive bid to the NCAA Tournament.

Jones, from Missouri City, Texas, hit .378 with 10 home runs, 36 RBI, eight doubles and 29 walks — all highs on her team — and became Northwestern State’s first major award winner on the state level in five years. She was voted first-team All-Louisiana.

Santiago, in his seventh season at Nicholls, led the Colonels to the Southland regular-season championship by three games. The Colonels finished 40-15, their most victories since 1998, and they were the first team since 2002 to lead the Southland in batting average and ERA. He also was Louisiana Coach of the Year in 2016.

For the first time in 11 years, UL Lafayette did not have the most All-Louisiana first-team selections. That honor belongs this season to McNeese: Piancastelli, Morgan Catron at first base and Justyce McClain in the outfield. The Cajuns, Nicholls and Louisiana Tech have two first-team selections apiece.

UL Lafayette’s Ellyson is the other first-team pitcher. Also on the first team are Moriah Strother at catcher and Kali Clement at utility from Nicholls, Louisiana Tech’s Morgan Turkoly in the outfield and Sloane Stewartson at designated player, and Centenary’s Anna Dunn in the outfield. Clement was the runner-up for Newcomer of the Year.

Leading the second team are LSU with four selections and Nicholls with three. Joining Hoover are LSU teammates Amanda Doyle at first base and Aliyah Andrews and Emily Griggs in the outfield. Representing Nicholls are pitcher Megan Landry, shortstop Amanda Gianelloni and outfielder Kasey Frederick.

Also on the second team are Kiara Suttles of Southern at catcher, Mahalia Gibson of Southeastern Louisiana at third base, McNeese’s Alexandria Saldivar at designated player, Louisiana Tech’s Kimmie Atienza and two from LSU-Alexandria: Alexis Hagan at second base and Kimber Gruehl in the outfield. Gruehl and Griggs tied for the final spot in the outfield.