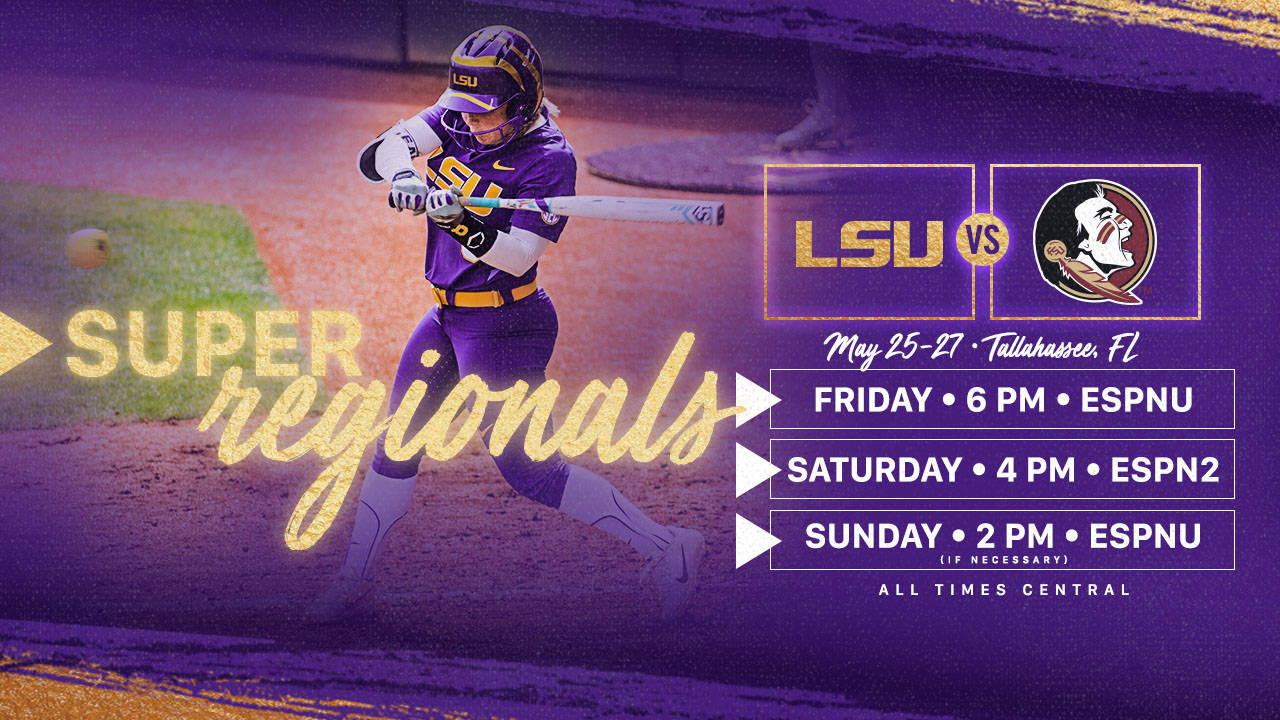 BATON ROUGE – For the second-straight year, a spot in the Women’s College World Series will be on the line this weekend in Tallahassee as the 11th-seeded LSU softball team travels to sixth-seeded Florida State.

First pitch between the Tigers (44-15) and Seminoles (50-10) is scheduled for 6 p.m. CT on Friday. ESPNU will televise the game, which can also be seen on the WatchESPN app. Kevin Brown and Erin Miller will be on the call. The game will broadcast on the LSU Sports Radio Network (107.3 FM in Baton Rouge and www.LSUSports.net/live) with Patrick Wright calling the action.

Two wins over the Seminoles would advance the Tigers to the seventh Women’s College World Series in program history and the fifth under head coach Beth Torina in seven seasons.

Series Records
LSU leads the all-time series over Florida State, 5-3. The two teams met in last year’s super regionals. The Tigers fell in the opener, 3-1, but rallied to win game two and three by scores of 1-0 and 6-4 to earn their sixth trip to the WCWS in school history.

Torina’s Thoughts
On Florida State…
“Florida State is really good. They deserve to be ranked where they are and are really talented. Our job is tough in what is in front of us. We have to be really good at what we do and attack what we think their weaknesses are.” On Florida State’s pitching… “They are very good. We’ll have a specific plan for each one and the plans may change as we go. They are talented and a big reason for their success. They are a solid program, but those pitchers are having a great year.”

On pitching depth…
“It is exciting. I think we are deeper than just two pitchers and that is a huge help when you are going into these weekends. You need all of your arms and all of that depth. It is really important.”

On the LSU offense…
“They are doing a great job. It is going to be scratch and claw the rest of the way. Doesn’t matter the offense, this time of year you are trying to score one more than them and that’s everybody’s goal this time of year.”

The Tigers advanced to Tallahassee after claiming the regional title in Baton Rouge last weekend. The Tigers opened the regional with a dominating 9-0, five-inning victory over Fordham on Friday. Allie Walljasper shutout Houston to win game three of the regional and advance to the regional finals. The Tigers fell to UL Lafayette on Sunday in game six, but rebounded to win the elimination game, 3-1.

Aliyah Andrews is leading the team at the plate with a .328 batting average. She has a team-leading 67 hits and has stolen 42 of 43 bases this season, which is four short of breaking the single-season record of 45. Amanda Doyle is hitting .326 with a team-leading 14 doubles and seven home runs. Shelbi Sunseri and Michaela Schlattman each have seven home runs.

In the circle, LSU has an earned run average of 1.41, which is ranked ninth in the country. Allie Walljasper, who is 18-6 on the year, is ranked seventh among the nation with a 0.94 ERA. Carley Hoover leads the team in strikeouts with 180 in 151.0 innings of work. She owns a 16-6 record with eight shutouts. Maribeth Gorsuch earned her first NCAA Tournament victory over Fordham last Friday. She is 9-3 on the year.

About the Seminoles
Florida State won the Tallahassee Regional last weekend to advance to the super regional round. The Seminoles put together three-straight wins, defeating Jacksonville State, 8-0 in five innings, Auburn 2-1 in eight innings and Jacksonville State again in the regional championship, 10-0.

The Seminoles finished the regular season ranked No. 5 in the NCAA Softball RPI and posted the No. 1-ranked non-conference strength of schedule in the nation. They earned three of the four individual awards in the ACC, including Player of the Year Jessie Warren, Pitcher of the year Kylee Hanson and Freshman of the Year Sydney Sherrill. Florida State topped the ACC with a 21-3 record.