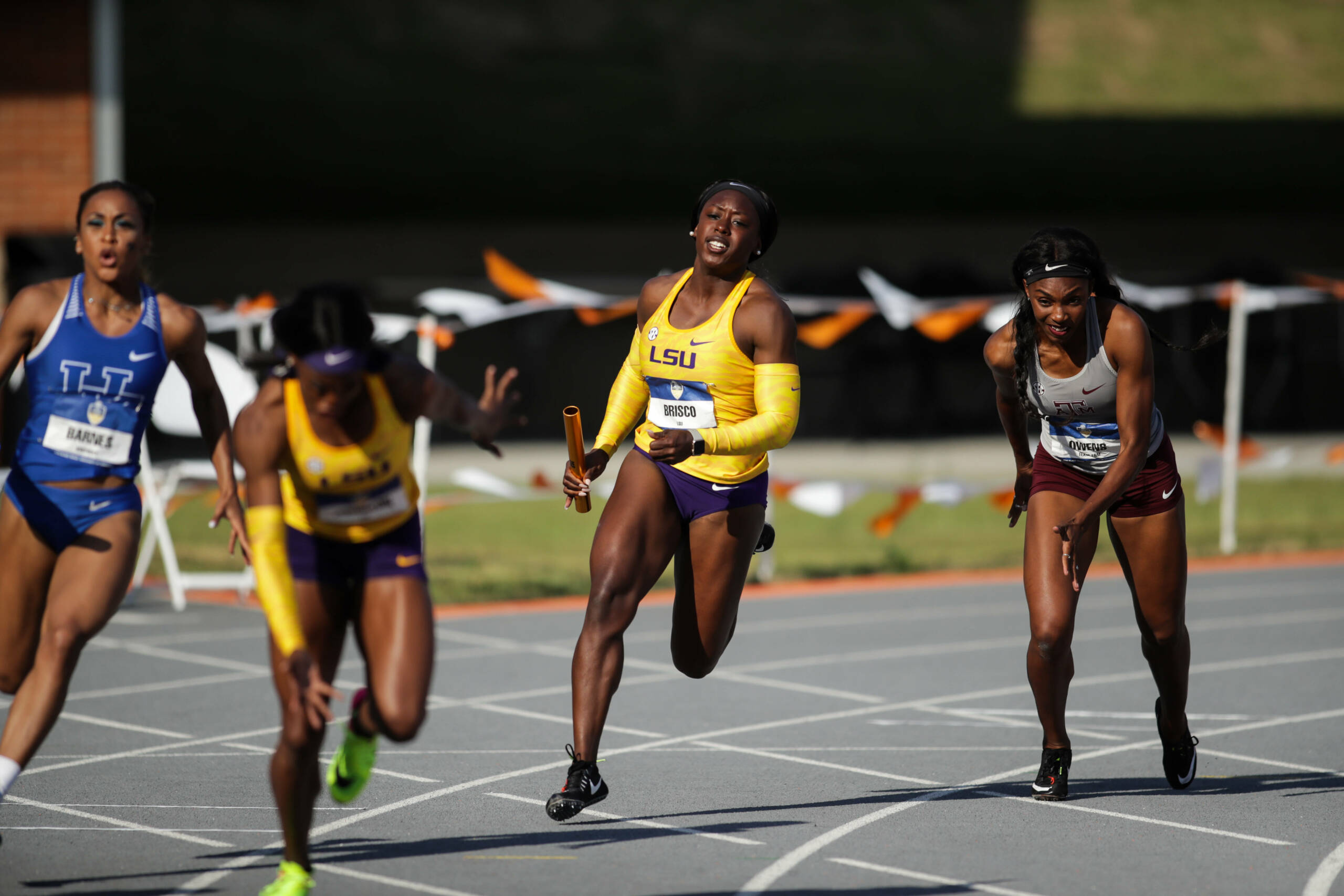 Baton Rouge, La. – The LSU track and field team will have 30 athletes (17 women and 13 men) in action this Thursday through Saturday (May 24-26) at the NCAA East Preliminaries in Tampa, Fla., with hopes of advancing to the NCAA Championships in Eugene, Ore., on June 6-9. In addition to the 30 athletes competing as individuals, the Tigers will have four relays in action; both the women’s and men’s 4×100 meter and 4×400 meter relays will have a chance to advance to Eugene.

FloTrack (subscription required) will have live coverage of the three-day event in its entirety. Entries, seeds, meet schedule and live results for the prelims can be found at ncaa.com. In order to advance to the NCAA Championships, an athlete must finish inside the top 12 of their respective event. Entering the East Preliminaries, the LSU women have the 25 total qualifiers, which is the fifth most in the NCAA, while the men have 16 total entries at the meet.

The LSU women enter the East Preliminaries as the No. 2 ranked team in the country according to the latest U.S. Track & Field and Cross Country Coaches Association rankings that were released on Monday (May 21). The men’s squad has moved up one spot into the No. 10 position. Entering the preliminaries, the LSU women currently have nine top-10 performances based off the NCAA Descending Order List. Of those nine top-10 marks, five of those rank inside the top three of the country. The top three performances nationally from LSU are Aleia Hobbs (100 meter dash), Kymber Payne (400 meter hurdles), Kortnei Johnson (200 meter dash) and the 4×100 and 4×400 meter relay.

The women’s 4×100 meter relay squad of Mikiah Brisco, Kortnei Johnson, Rachel Misher and Aleia Hobbs are now collegiate record holders in an event that LSU has dominated throughout the history of NCAA track and field. Owning a season-best readout of 42.49, the quartet entered the SEC Championships as the heavy favorite and they backed it up. The foursome came together to circle the Tom Black Track (Knoxville, Tenn.) in a collegiate record-setting time of 42.05 to claim the gold medal – LSU’s third-straight SEC title in the event. The time of 42.05 is a 2018 world lead and LSU owns six of the eight fastest collegiate times in the NCAA this season.

Senior sprinter Aleia Hobbs has been a mainstay on The Bowerman Watch List ever since she won her first career individual national title in the 60 meter dash at the 2018 NCAA Indoor Championships. She made her fourth-consecutive appearance on the star-studded list that was released on May 16. Hobbs had a dominant SEC meet winning the 100 meter dash with a meet and facility record of 10.92. In the prelims of the SEC meet, Hobbs ran a 100 meter dash time of 10.93; with those two performances, the New Orleans native now owns three of the five fastest wind-legal 100 meter dash times in NCAA history.

Short Sprints Will Be Crucial for LSU Women

Kortnei Johnson is in the same boat as Brisco and will be attempting to advance to Eugene in the 100 and 200 meter dashes. Her season-best NCAA qualifying time of 10.97w ranks as the third best in the nation and her best 200 meter dash readout of 22.52 ranks eighth nationally. Just like Brisco, Johnson will be lining up as a member of the 4×100 meter relay. Speaking of the 4×100 meter relay, the third leg, Rachel Misher is also a NCAA East Preliminary qualifier in the 400 meter dash. At the SEC Championships, Misher ran a career-best readout of 51.60 to place fourth; the time of 51.60 is the sixth-fastest 400 meter dash time at the East prelims. Cassondra Hall and Zakiya Denoon will both compete in the 100 and 200 meter dash and they will be joined by Shayna Yon in the 100 meter dash.

LSU has several highly ranked hurdlers that will be attempting to Eugene. Tonea Marshall (12.73) and Brittley Humphrey (13.02) will look to hold up their top 12 seeds and earn a berth to the championships final site in Eugene. In the 400 meter hurdles, Kymber Payne (56.92/No. 2 in NCAA) and Jurnee Woodward (57.77/No. 13 seed at East Preliminaries) have a great shot of advancing. Ersula Farrow will look to run a pair of smooth 800 meter races and advance to Eugene; she enters the prelim meet with the No. 3 seed, a 2:03.66 she ran in Miami in April. Jaron Flournoy owns the No. 7 overall seed in the NCAA and the No. 4 seed in the East Region in the 200 meter dash with a season-best time of 20.23 that he registered in late April at the LSU Invitational.

LSU has eight freshmen that will partake in their first NCAA East Preliminary meet. A hurdler from Sunrise, Fla., Damion Thomas has been nothing but exceptional in his first year in Baton Rouge. The freshman stepped right up and competed with the best of the best two weeks ago in Knoxville at the SEC Championships and earned a third-place showing in the 110 meter hurdles. In the prelim heats of the SEC meet, Thomas clocked his fastest all-conditions time of his collegiate career with a wind-aided 13.39 that ranks him as the fourth-best hurdler in the nation.

A pair of high jumpers, Abby O’Donoghue and JuVaughn Blake, had impressive showings at their first career SEC outdoor meet. O’Donoghue garnered silver with a clearance of 1.80 meters (5-10.75), while Blake cleared a height of 2.22 meters (7-3.25) to finish in fourth. Jake Norris scored five points for the LSU men as well in the men’s hammer throw when he heaved it 69.87 meters (229-3) for fourth place.

Jurnee Woodward and Milan Young stepped up to the starting blocks at their first SEC outdoor meet and scored in the 400 meter hurdles for the Tigers. Woodward registered the best time of her career with a 57.77 to place fourth, and Young crossed the finish line with a time of 58.54 to take sixth. The final freshman making the trip to Tampa will be Kary Vincent Jr. who served as the leadoff leg on the SEC-title winning 4×100 meter relay team that registered a season best of 38.76.